Anglerfish are a type of fish that belong to the order Lophiiformes. They are bony fish that have a characteristic way of hunting, in which a modified luminescent fin ray acts as a lure for other fish. The luminescence comes from symbiotic bacteria, which they acquire from seawater.

Anglerfish are a very diverse group, ranging in size and appearance. Some species look like tubes with large heads while others look more like worms. They are usually deep-sea creatures that eat smaller fish or squid by using their lures to attract prey into their mouths.

Extreme sexual dimorphism and sexual symbiosis are two characteristics of some deep-sea anglerfish. These species can be found in the suborder Ceratiidae, which consists of anglers living at depths greater than 1,000 meters (3,300 ft). While female anglers may be several orders of magnitude larger than males, they live together as mating partners. 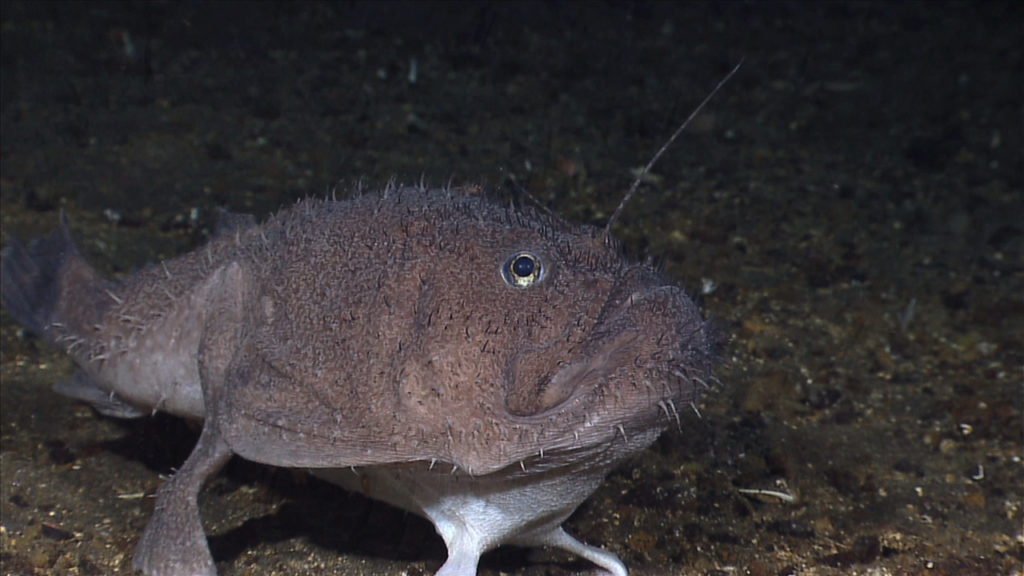 Anglerfish are found all over the world. Some live in the open sea, while others live on the ocean floor. Pelagic anglerfish are elongated with a large mouth that faces upwards, whereas benthic forms are often extremely flattened with large upward-facing mouths.

The species that are found to swim freely have a different shape than those that are attached to rocks or other objects. The swimming ones are taller and narrower on the sides.

Anglerfishes have a special light in their lure to attract prey. The light comes from the plankton that is at the end of the lure, which is known as an “esca.” This esca contains a tall spine with a fleshy nob at the end.

Angler fish live in the dark and cold, deep oceans. They range in color from dark gray to dark brown and can be up to 10cm in length, though most fall between 2–18 cm. Angler fish have large heads that bear enormous, crescent-shaped mouths full of long, fang-like teeth angled inward for efficient prey grabbing. Their females tend to be much larger than males due to sexual dimorphism. 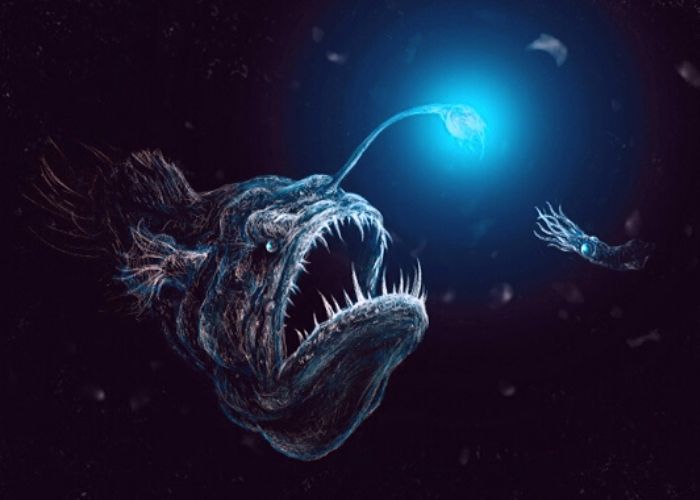 The mouth of most species is large and wide, extending all around the anterior circumference of the head. Teeth line both jaws, and are inclined inward so as to offer no impediment to an object gliding towards the stomach, but prevent its escape from the mouth. The anglerfish can distend its jaw and stomach because it has thin flexible bones that take up prey that doubles in size.

Anglerfish feed on a wide variety of fish, crustaceans, and cephalopods. Because they live in deep-sea environments, it is not uncommon for them to eat prey that is almost as large as them. They have large mouths and can swallow prey whole. Some commonly eaten food includes small fish, squid, snails, shrimp, and more depending on their range and feeding habits. Benthic species live on the seafloor and are ambush predators. They will sit and wait for prey to come close, and when it does they will swallow it whole. Pelagic species swim freely around the ocean, but also tend to be ambush hunters. They use lures that draw prey in, then swallow them whole when they get close.

Anglerfish exhibit extreme sexual dimorphism with females being up to 10 times the size of males. When a female is ready to spawn, she will seek out a male and collect him into her body. Some species allow multiple males to cohabitate in a single individual, while others adhere to a “one male per female” rule. Symbiosis is not the only method for reproduction in these fish; many species reproduce sexually as well. 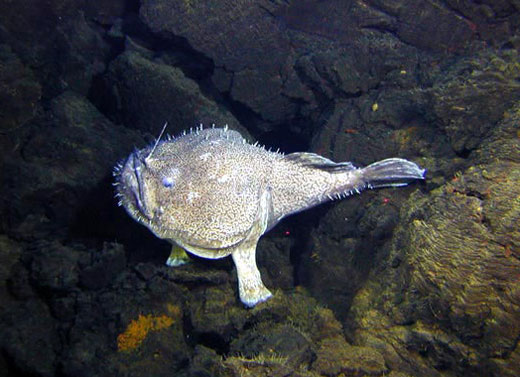 In some Anglerfish species, the male bites onto the female’s skin and slowly fuses into her. He becomes a fleshy protrusion and serves as a constant sperm production for her. Other species reproduce more normally—some lay small numbers of eggs, while others lay many eggs in one large group.