The Australian Terrier was developed in Australia during the 19th century by crossing several types of terriers. These dogs were brought to Australia to kill rodents. The Australian Terrier has ancestors in common with all of these breeds, except for the Skye Terrier, which was not involved in development. In the early 19th century, rough-coated terriers from Great Britain were brought to Australia to get rid of the many mice and rats.

The Australian Terrier breed was originally developed in Australia during the early 19th century. At first, the dogs were called “Rough Coated Terriers” because of their coat. This name was used until 1892 when the breed was officially renamed the Australian Terrier due to its popularity in England. The dog breed was first shown at a dog show in Melbourne around 1906, and also shown in Britain.

The Australian Terrier is a small, sturdy, and medium-boned dog that should exhibit a ground-covering gait and hard condition. This dog’s weatherproof coat is made up of a short, soft undercoat and a harsh, straight outer coat which measures about 2.5 inches long; the coat on the tail and lower legs are shorter, this dog is long in proportion to the height.

The coat of the Belgian Sheepdog is a solid blue or silver and tan, with a lighter colored topknot. The markings on the face, ears, body, and legs are described as “tan, never sandy”, or red with a sandy variation. The tail was traditionally docked to protect the dog from a spinal injury while hunting in the field.

According to the American Kennel Club, the Australian Terrier is “spirited, alert, with natural aggressiveness of a ratter and hedge hunter”. The breed has an excellent “Working and Obedience” intelligence rating. They are trainable dogs that do well with other dogs. The breed tends to get along well with other dogs in their house, although males may differ in this situation. Australian Terriers were bred to be companions for people, so they tend to be very friendly towards humans. They are also very protective of their owners and will not back down if threatened and they like to dig the ground.

Aussies are scrappy with other dogs of the same sex. But most individuals are willing to coexist peacefully with other pets, except for cats—they don’t like them! They can be bossy sometimes though! And they’re bred to pursue anything that runs or looks like prey, so keeping a pet hamster or rat would be a big risk

Aussie is a good breed for people with active lifestyles. This dog needs a daily walk, run, or game of fetch. The Aussie’s coat needs weekly combing and trimming twice a year to look its best. Additionally, you should regularly pluck dead hairs from the coat to maintain optimal condition year-round. Australian terriers must be trimmed every few months. Breed purists may say that terrier coats should never be clipped because it makes the coat softer and more prone to matting. Instead, they advocate hand-stripping each dead hair pulled out so a new one can grow in its place. 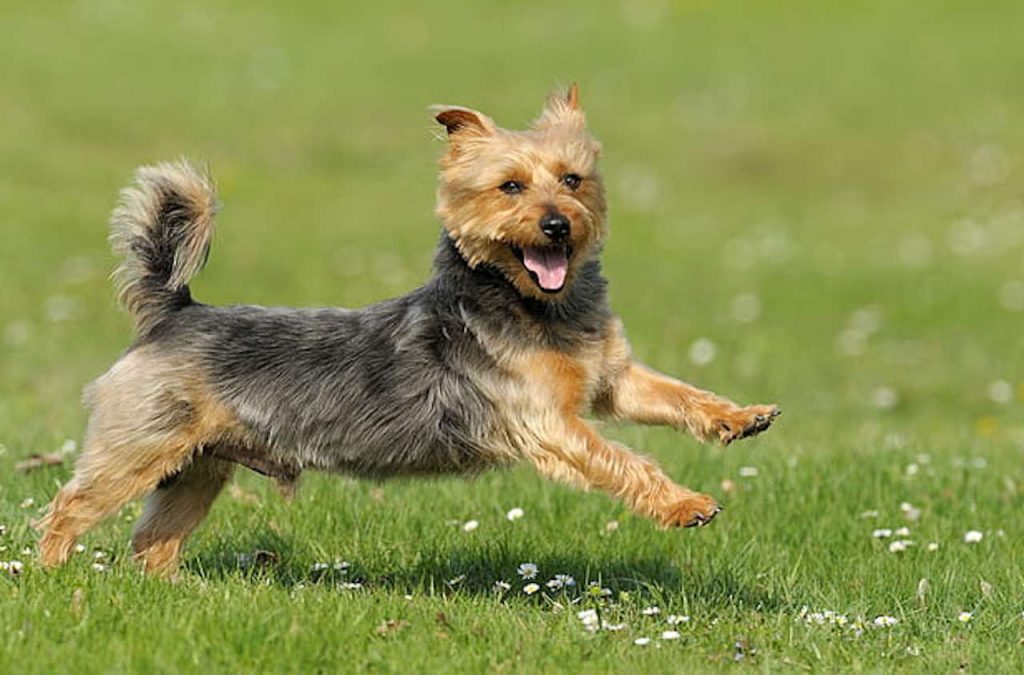 The most frequently reported health problems in dogs are cancer, endocrine (primarily diabetes), allergic dermatitis, and musculoskeletal (primarily luxating patella and ruptured cranial cruciate ligament). Other conditions reported include cataracts and ear infections with cancer being the major cause of death and old age. The Australian Terrier is a purebred dog that has expected longevity of 11 years. Purebred dogs, in general, have lower longevity than mixed breed dogs, but the Australian Terrier’s longevity is on the low end for breeds with similar sizes.