The barracuda species is a marine fish that belongs to the genus Sphyraena, which is the only genus in the Sphyraenidae family, and was identified by Constantine Samuel Rafinesque in 1815. It can be grown in tropical and subtropical waters all over the world, from the Atlantic Ocean’s eastern border to the Red Sea, the Caribbean Sea’s western border, and tropical portions of the Pacific Ocean. A barracuda is any of roughly 20 species of predatory fish in the Sphyraenidae family (order Perciformes). Barracudas may be found in all tropical and warm environments, although some can also be found in more temperate climates. However, in some oceans, they may become infected with a deadly chemical that causes ciguatera sickness.

Barracuda species are known for being aggressive and restless, and huge ones are feared fish that can be deadly to people. Some barracuda species are thought to be harmful to swimmers. Barracudas are scavengers who may misunderstand scuba divers for enormous predators and pursue them in the hopes of consuming the carcasses of their prey. Barracuda species have been known to bite swimmers, but such incidences are uncommon and may be due to low visibility. In exceptional cases, huge barracudas can indeed be found in swampy shallows. Barracudas might misinterpret glinting and shining objects for prey. 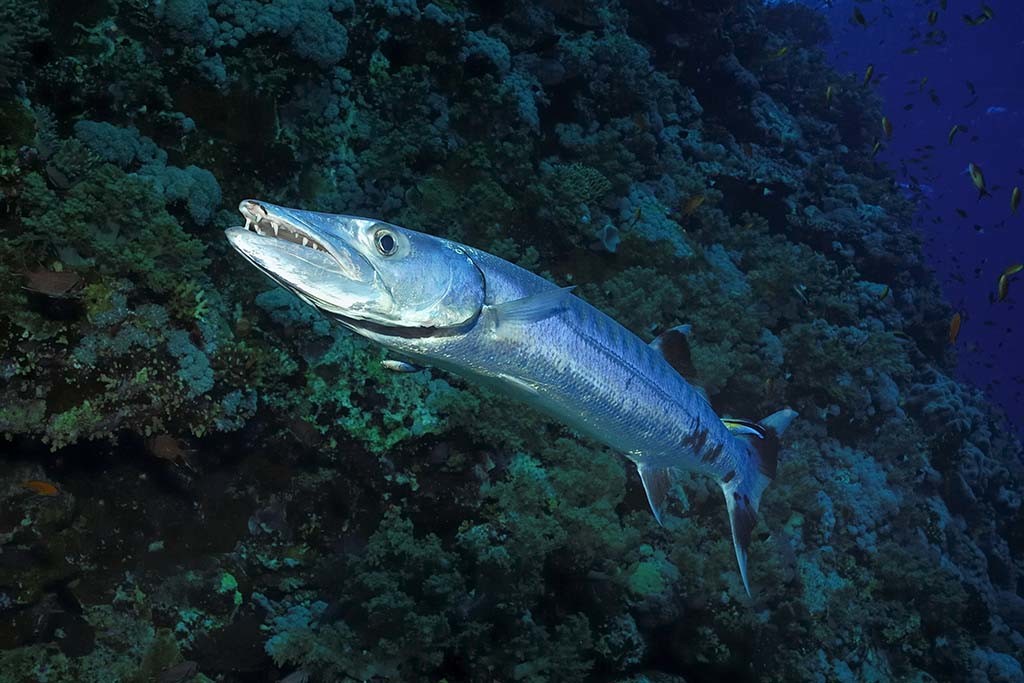 The body of a barracuda is fashioned like a rocket and is designed to cut through the water. One of the fastest species in the sea is this lengthy, slender, and powerful fish. Barracuda can move just about as fast as mako sharks, who are known for their speed. Barracuda, on the other hand, cannot maintain high speed over extended distances.

In search of food, the barracuda is a runner, skilled in explosive movements. They spend the majority of their time swimming slowly enough to survey for food, only speeding up when prey is still within range; they frequently swim in small or big groups.

Barracuda species typically swim in saltwater in pursuit of schools of plankton-feeding fish. Prey has a hard time detecting them because of their silver and elongated bodies, and it’s extremely harder to spot them while looking at them straight on. When it comes to hunting, barracudas rely significantly on their vision. When they’re hunting, they’re drawn to anything with an unusual color, reflection, or movement.

A barracuda is a huge carnivorous ray-finned species with a terrifying appearance and fierce behavior. Barracuda species have spiral appearances, with conspicuous, crisply, fang-like teeth positioned in sockets of their huge jaws, similar to piranhas. Many species have big, pointed skulls with an underbite. Their gill coverings are coated with tiny scales and have no spines. 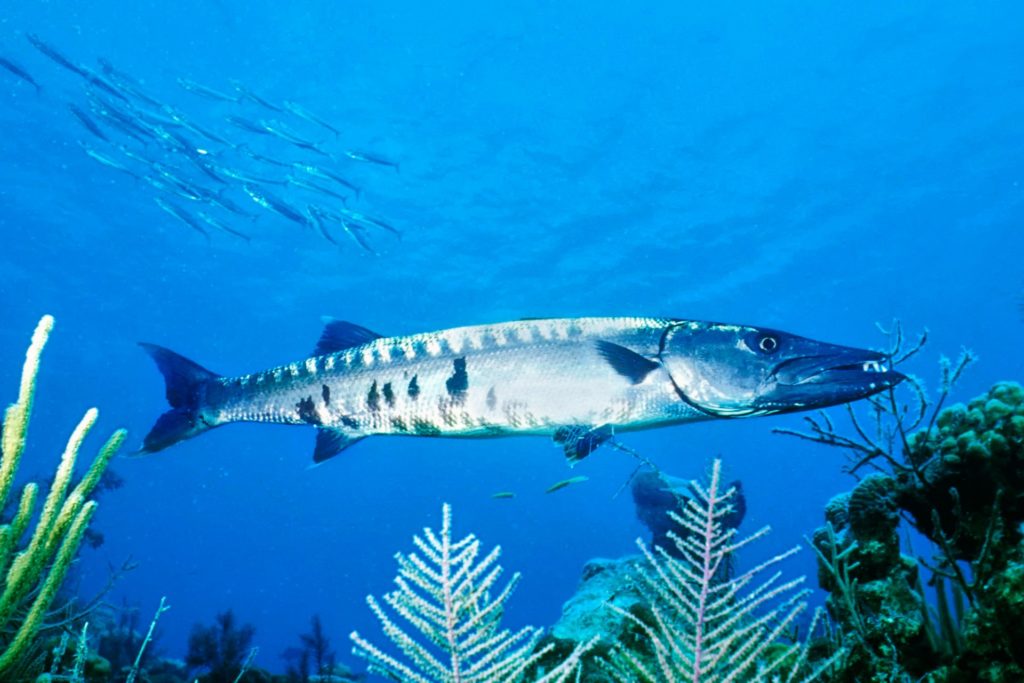 The upper body of the barracuda is dark gray, dark green, white, or blue, with silvery sides and a chalky-white belly. Species coloration differs slightly. On the sides of some species, there are irregular black dots or a row of darker crossbars. The great barracuda (Sphyraena barracuda) of the Atlantic, Caribbean, and western Pacific ranges in size from quite small to 1.2–1.8 meters (4–6 ft).

Near-shore habitats including seagrass meadows, mangroves, and coral reefs are home to the majority of barracuda species. Although certain kinds may withstand brackish water, they are mostly marine fish. Barracuda can be found in the Atlantic, Pacific, and Indian Oceans, as well as the Caribbean and Red Seas. 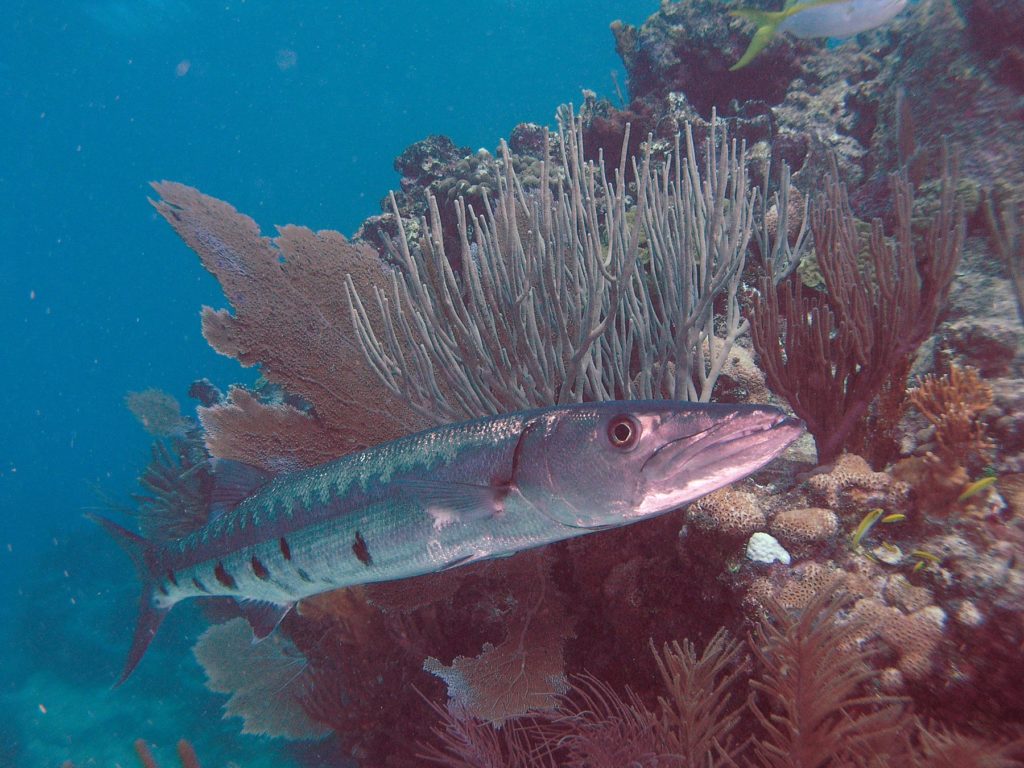 Barracudas are predominantly fish predators. They rip pieces out of larger prey to kill and swallow them. Barracuda species are frequently seen vying for prey with mackerel, dagger fish, and even dolphins. Barracuda eat a variety of species, including jacks, grunts, groupers, snappers, tiny tunas, mullets, killifish, herrings, and anchovies, by biting them in half. They also appear to eat smaller species of food that are placed across from them.