A sixteenth-century manuscript about badger hunting has the first mention of the Basset hound. The basset hound dates back to the 1500s when the pre-revolutionary French used heavy-bodied, low-slung hounds. The Basset Hound belongs to the hound family and is a short-legged dog. The Basset Hound is a scent hound that was initially bred to hunt hare. Only the Bloodhound has a better sense of smell and ground-scenting ability.

Basset Hounds are one of six “basset”-type breeds recognized in France. Basset is derived from the French word bas, which means ‘low,’ and the suffix -et, which means ‘very low.’ A mutation in the litters of Norman Staghounds, a descendent of the St Hubert’s Hound, resulted in the Basset type.

The Basset breed originated in France and is descended from hounds owned by St Hubert of Belgium in the sixth century, which were bred at the Benedictine Abbey of St. Hubert and eventually became the St Hubert’s Hound around 1000 AD. The Laconian (Spartan) Hound is the ancestor of St Hubert’s original hounds. In 1585, La Venerie was the first to reference a “Basset” dog. 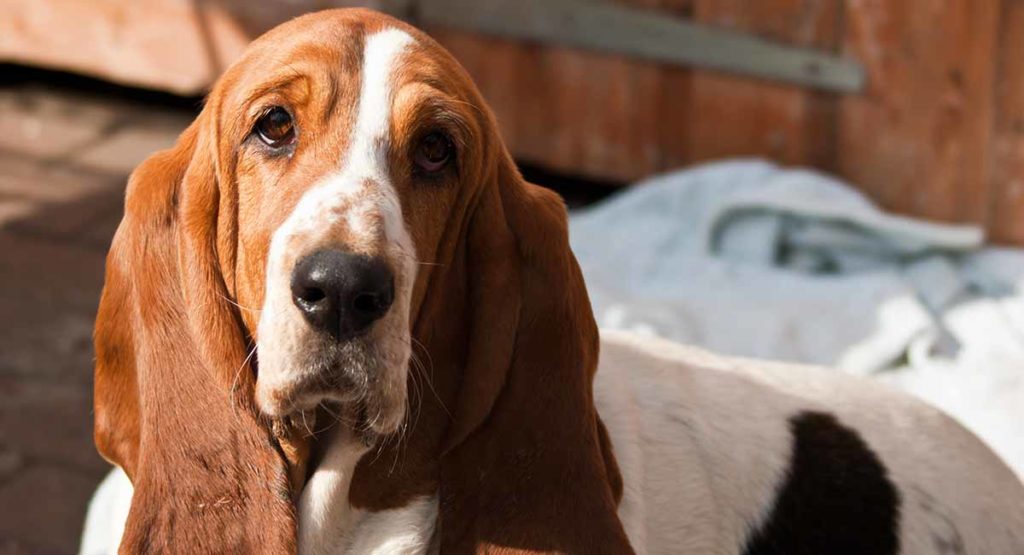 Hunting on horseback was reserved for kings, large aristocratic families, and rural squires until after the French Revolution in 1789, which is why short-legged hounds were highly regarded for hunting on foot. During the reign of Emperor Napoleon III (r. 1852–1870), Basset-type hounds gained popularity.

In 1870, regulated breeding of the short-haired Basset started in France. As early as the 1870s, French Basset Hounds were being introduced into England. While some of these dogs were unmistakably Basset Artésien Normands, linebreeding had shifted to a heavier type by the 1880s. The first breed standard for the Basset Hound was created in Great Britain around the end of the nineteenth century. In 2010, this standard was modified.

The big long nose of the Basset, which is second only to the Bloodhound in scenting capacity and amount of sensory neurons, is a distinguishing feature of the Basset’s head. Dwarfism is the cause of Basset’s short legs. Bassets are remarkably lengthy, despite their tiny stature. Because Bassets are so heavy and have such small legs, they struggle to stay above water for lengthy periods of time when swimming.

It has a neck that is longer than its head. Flat collars are readily pulled off because of this, as well as the loose skin around its face and neck.  The Basset’s trademark facial creases are caused by the looseness of the skin. Due to their floppy flews, they salivate a lot. 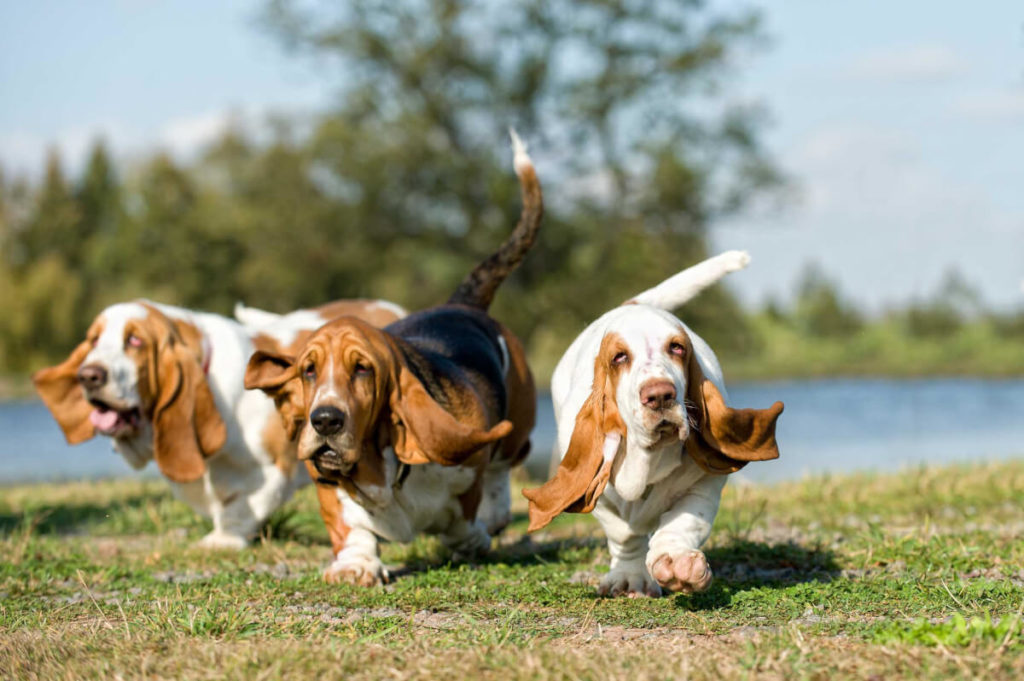 Bassets have curled swordtails raised aloft over their long rear ends and are large, short, sturdy, and long. A mature dog can weigh anything from 20 to 35 kg with a height of 15”. This breed has more bone mass than any other in relation to its size.

A Basset’s short-haired coat is smooth and velvety, and it sheds frequently. Any color of hound is permitted, albeit this differs by country. They are usually tricolors (black, tan, and white) or bicolors (tan and white). Tans range from reddish-brown to reddish-brown to lemon. Lemon and white is a color combination that is less common. Some Bassets are gray or blue in hue, which is considered an unusual color. The movement of the Basset Hound is sleek and powerful, and they tend to move with their nose to the ground.

The Basset Hound is one of the friendliest and most laid-back breeds. This breed gets along well with other dogs, pets, and children. They prefer to take things slowly and enjoy sniffing and trailing. These are gifted and dedicated trackers who will not be easily swayed off their path. As a result, they may embark on a path and follow it until they become disoriented. This dog has a reputation for being stubborn and slow. When they’re thrilled on the path, Bassets have a loud bay that they employ. Potential buyers should expect to treat Bassets with caution and patience. 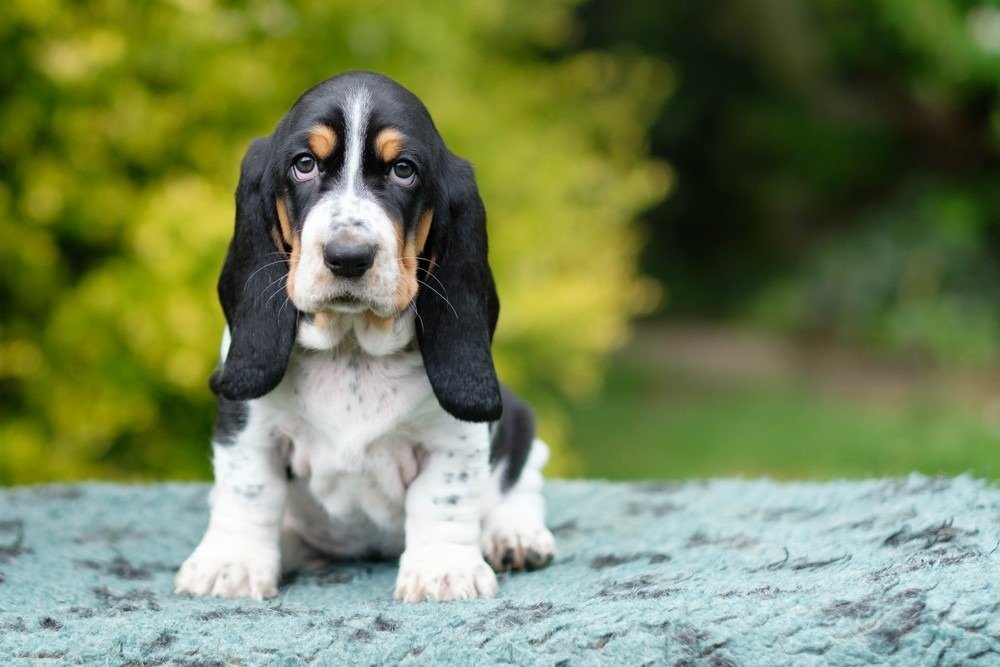 The Basset is a placid dog on the inside, but it needs frequent activity to stay in shape. The Basset needs light exercise on a regular basis, which can be met by walking on a leash or playing in the yard. The coat requires relatively minor care, but odor control on the face may necessitate regular washing around the mouth and wrinkles because Bassets have a tendency to drool.

Unlike other breeds with erect or more open ears, Basset Hounds have enormous distended ears that do not allow airflow inside them. To avoid infections and ear mites, their ears must be cleaned both inside and out on a regular basis. The hereditary disease osteochondrodysplasia causes the Basset Hound’s small stature. Basset Hounds are prone to yeast infections in the folds around the mouth, gastric dilatation-volvulus, and paralysis, and this bone growth abnormality may be a predisposing factor in the development of elbow dysplasia, which leads to arthritis of the elbow joint. They may also be susceptible to eye issues. The average lifespan is between 13 and 16 years.