Sturgeons are a really old group of fishes that belong to one of the oldest bony fishes lineages. Their prehistoric ancestors are represented by their dinosaur-like physique. The beluga (Huso huso), sometimes known as the beluga sturgeon, is an anadromous fish. It’s mostly found in the Caspian and the Black Sea basins, but it used to be in the Adriatic Sea. It is the third-largest living bony fish species.

Due to the huge armored head, Huso huso appears to stem from an Old German term meaning skull. The kaluga, or river beluga, is the only other member of the genus and is possibly the world’s largest freshwater fish. The white sturgeon, the short-nose sturgeon, and the green sturgeon are all related species.

They feature thick bony plates covering their bodies, asymmetrical, shark-like tails, and barbels on their long snouts that aid in locating their prey. The beluga sturgeon’s appearance, combined with its enormous size, can be terrifying, however, this species is harmless and actively avoids humans. The Arctic beluga whale and the beluga sturgeon share the same name, which originates from the Russian word Belaya, which means “white.” Surprisingly, this is also where the name Belarus comes from. The sturgeon, which evolved more than 200 million years ago, is one of the most “primitive” bony fish still alive today.

This species has evolved to live in both freshwater and saltwater environments. It spends the majority of its life near the sea coast and then migrates upriver to spawn and generate young during the spawning season. This type of behavior is known as euryhaline, which means it can withstand a wide range of salinities. The Caspian Sea is primarily a habitat of the beluga sturgeon. 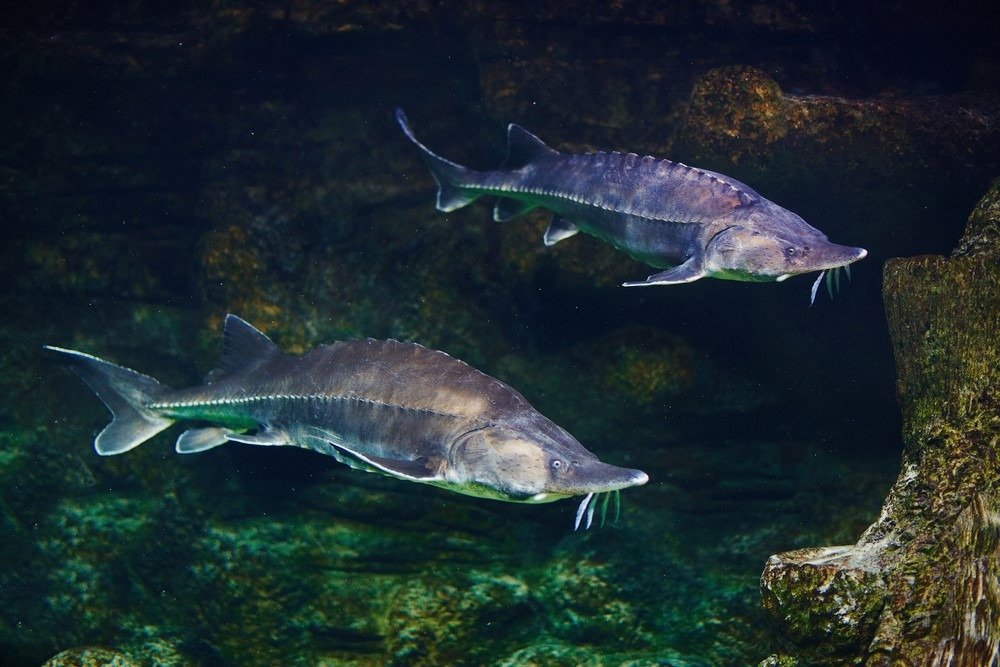 This massive body of water, which is split between Russia, Kazakhstan, Azerbaijan, Turkmenistan, and Iran in Central Asia, is the world’s largest inland sea. It receives water from over 100 rivers, including the Volga. The beluga is also found only in the Black Sea and the Sea of Azov, which is located between Turkey and Russia.

The Beluga sturgeon has an extended body, heterocercal tail, largely cartilaginous skeleton, bare skin, and a longitudinal sequence of scutes, just like other sturgeon. The beluga sturgeon is the second-longest fish after the huge oarfish, and it is as massive as the ocean sunfish. It is the world’s largest freshwater fish. The beluga is also the world’s largest actively predatory fish, competing with the great white shark and the Greenland shark. Juveniles have a slender build and a narrow skull with a centrally located but upward protruding mouth. The snout (nearly half of the head) is slender and pointed, scutes are visible, the rear and flanks are dark grey or black, and the belly is white. Adults have a humpback and are heavy-set, spindle-shaped, and big. The head is huge, with a big protractile mouth that moves toward the front of the head as it grows.

The snout is short (one-third to one-quarter of the head), and the scutes gradually dissolve and reduce in number as the animal grows older. With silver or grey flanks and a white bell, the coloring is blue-grey or dark brown. The dark dorsum stands out in stark contrast to the rest of the body.

Belugas of this size are extremely old, continue to grow throughout their lives, and have become increasingly rare in recent decades due to excessive fishing. The mature belugas took a range in length from 4 feet 8 inches to 10 feet 9 inches and weigh between 19 and 264 kg. The female beluga is around 20% larger than the male. A particularly enormous beluga was recently caught, weighing 960 kg and measuring 11 ft 2 in length.

This is performed by the male and female releasing their eggs and sperm (typically in the millions) into the water separately. If the conditions aren’t right for spawning, the female has the option of reabsorbing the eggs and trying again later. Females only spawn every four to eight years on average due to their fussy nature.

Various diets have been reported throughout the beluga sturgeon’s distribution region, as well as according to the spawners’ migration stage. Adults primarily consume a wide variety of big fish (73 percent of the diet). Mollusks and crustaceans, aquatic birds, and juvenile seals are all possible food sources (Caspian seals, Pusa caspica). With age, the piscivorous diet of beluga sturgeon changes. In the wild, a beluga’s life expectancy is normally at least 50 years.