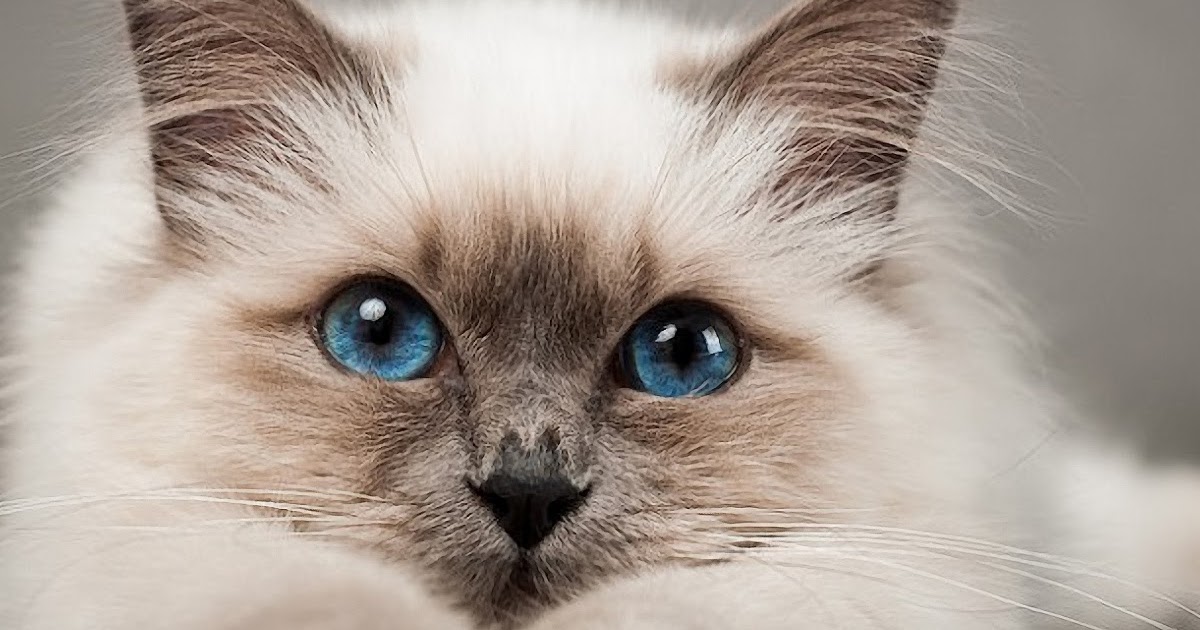 The Birman, also known as the “Sacred Cat of Burma”, is a domestic cat breed. A well-known characteristic of this breed is its silky coat and blue eyes. The Birman also has white “gloves” on each paw which are not actually part of the fur but rather excess hair that grows between the toes. The breed name is derived from Birmanie, the French form of Burma.

The Birman breed originated in Burma among the temples of ancient times and alongside priests. However, there are also some that believe the felines came to Europe, namely France, from somewhere in Asia. Regardless of the numerous stories and folklore that go around, there is a positivity that the Birman cat breed was found in France as early as the 1920s. 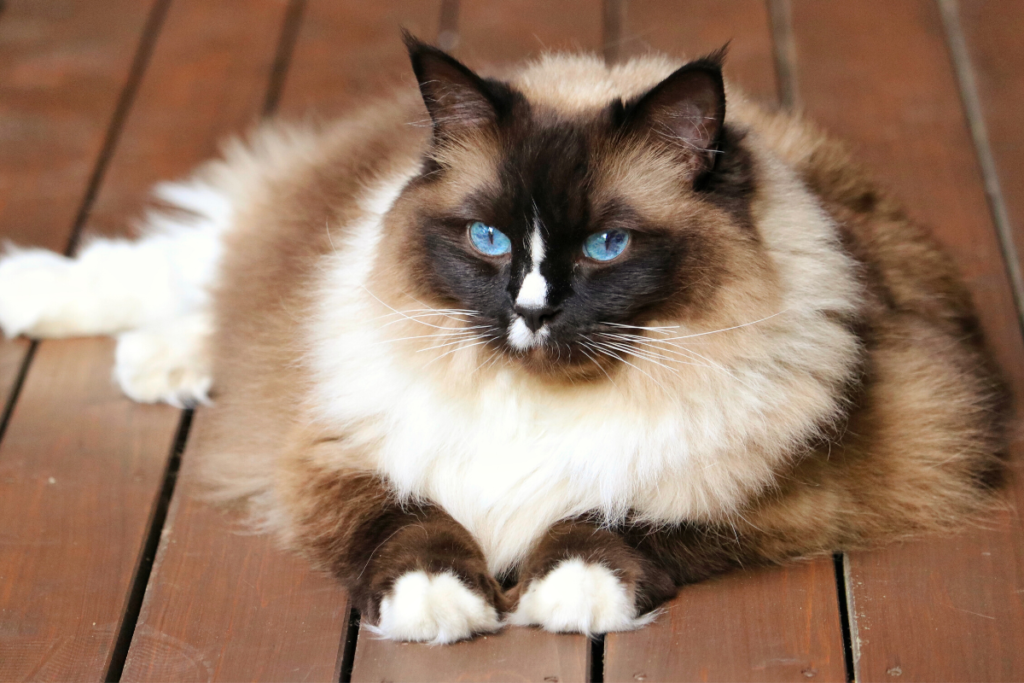 Birmans almost disappeared during World War II but persisted in France. Two cats survived the war—a pair named Orloff and Xenia de Kaabaa, both of which were bred by Baudoin-Crevoisier. Afterward, Birman breeders had to cross them with Persian and Siamese cats to restore the breed. The Birman breed was essentially extinct by the middle of the 20th century, but it was later revived through careful breeding. The restored breed became recognized in Britain in 1965.

The Birman cat was the first breed of cat to be accepted into a registry in France. It was recognized by the United Feline Breeds Association and became an AACE breed in 1959. Blue and seal points were the original colors, but red, chocolate, lynx, and tabby points were added later by English breeders. Birmans have also been used in the development of other breeds.

In 1959, the first pair of Birman cats arrived in the US and in 1967 CFA officially accepted the breed. From then on, the Birman has grown in popularity and is today one of the most popular breeds.

Birman cats are a color pointed breed of cat. They often have long, silky hair and four pure white feet (with the front paws sometimes brown). They are medium-sized and sturdy, with strong jaws and firm chins. Their heads are medium length with a small M-shaped marking on their cheeks. 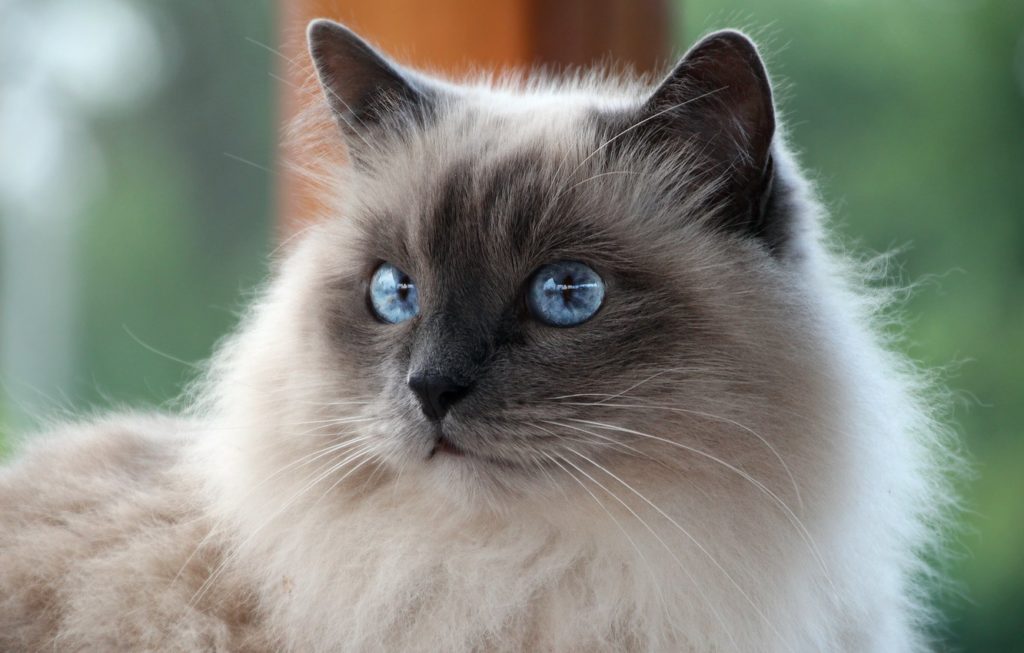 They have a medium-sized, rectangular body with a broad face and distinct Roman nose. They should have ears that are as wide on the base as they are tall and set high up on the head. The eyes should be rounded and deep sapphire blue in color. The cat’s fur is medium-long and silky in texture.

The Birman coat color is always pointed, except for the white feet that are symmetrical and separate from the rest of the body. The white should be pure throughout and connected to all toes on the foot; it must also extend noticeably further up the back of each leg. The recognized colors are seal, chocolate, blue, lilac (a softer silver-grey), red, or cream. Tabby and torte variations in the seal, chocolate, or blue are also allowed.

They are gentle, affectionate companions with an air of dignity that seems to invite adoration from their families. As former temple cats, they seem to have become accustomed to adoration. They are very intelligent and affectionate, according to some, and can be very people-oriented. Because of their easygoing nature, They make great pets. They are calm and quiet and will offer love and affection to anyone who has time for them. 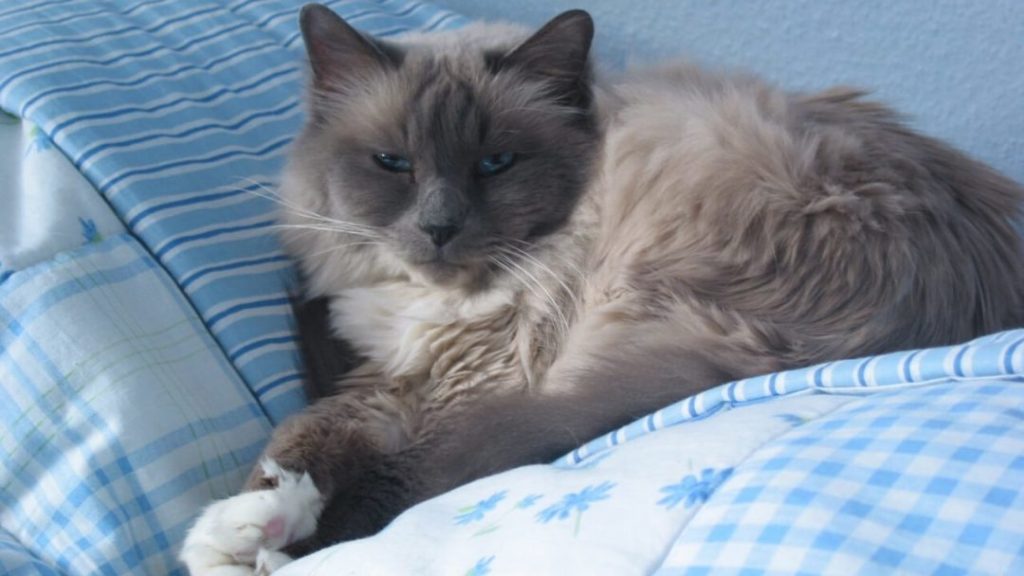 The most serious threat to the Birman breed is hypertrophic cardiomyopathy (HCM), a heart disease that is common in cats. HCM usually occurs because of a genetic disorder, and it can cause heart failure, hind-leg paralysis due to clot embolism originating from the heart, and sudden death. Congenital hypotrichosis can also affect this breed. They live an average life span of 13-16 years of age. Comb their coat weekly to remove dead hair and apply skin oils.