Vicki Spencer and her Southern Breeze Ranch in Palm Bay, Florida are the beginning of the Blue Bay Shepherd narrative. The Blue Bay Shepherd is a long-coated dog that was created by crossing wolf dogs with blue Old German Shepherds. The Blue Bay Shepherd has been in development for almost 20 years, with the first litters born in March of 2011. Despite their huge size, high energy levels, and lupine look, these dogs are calm and friendly, making them perfect family dogs.

Vicki’s ambition was to breed a giant dog with a wolf-like look and a willing, devoted temperament.  She desired a breed with strong health, a loving, calm, and steady disposition, German Shepherd Dog (GSD) adaptability, and deep blue coloration.

Vicki clearly knew exactly what characteristics she wanted in her dogs. She was resolved to get rid of those characteristics that bothered her. Vicki achieved her goals by breeding two European-imported blue Old German Shepherd Dogs named Jordan and Passion to her own wolf dogs, which she had been working with for years. The F6 generation means that the original wolf-to-dog coupling was five generations back in line, and the ensuing litters were the foundation Blue Bay stock. 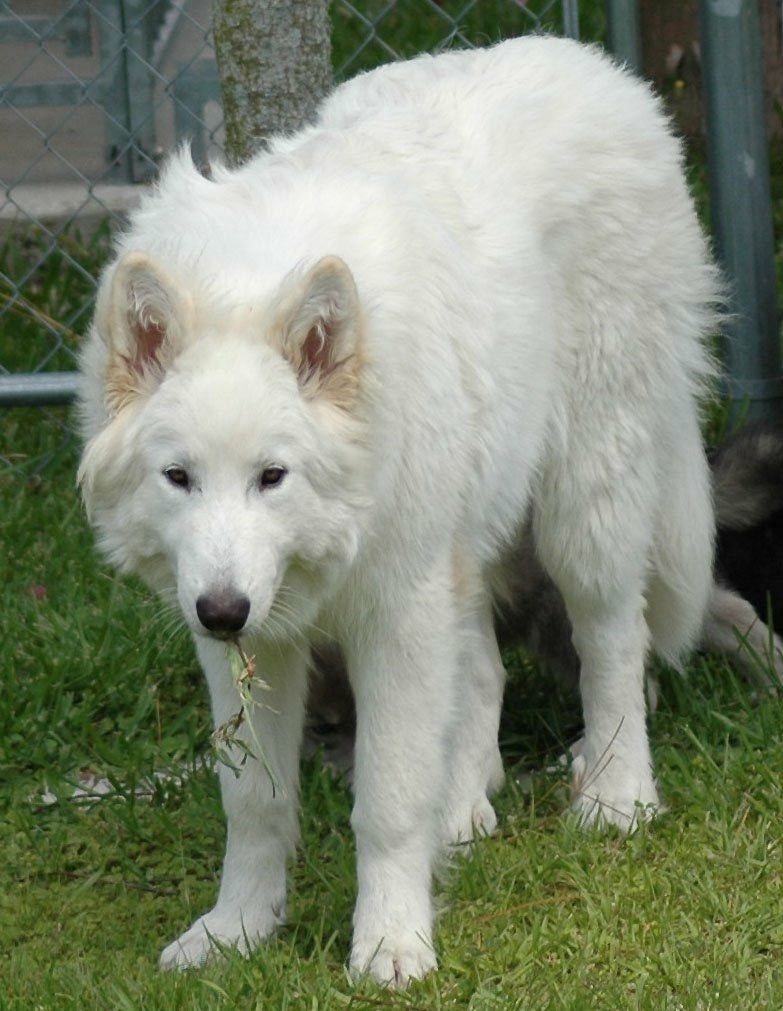 Vicki has been quite secretive about which other breeds were added to the gene pool in order to safeguard her accomplishments with the breed thus far and to avoid unscrupulous breeders from attempting to recreate the look.

Vicki Spencer states that the foundation stock wolf canines were five or six generations removed from pure wolf blood. Because the breedings are now between two American Blue Bay Shepherds, the percentage of wolf DNA will continue to decline. Although some puppies have as much as 16 percent wolf DNA, Vicki attempts to keep it around 6 percent. Blue Bay Shepherds acquire their name from their gorgeous coat and the fact that they’re bred in Palm Bay, Florida.

Although they bear a striking similarity to their wolf forefathers, they also have several German Shepherd Dog characteristics, especially in the form of their skulls. Blue Bays have a little spindly look, yet they are far from feeble. They are strong, well-muscled, and athletic, with erect ears and a sense of inner wisdom. The broadcast eyes of Blue Bay Shepherds are well-known. Their eyes can be pale green, hazel, or even pale blue in color. 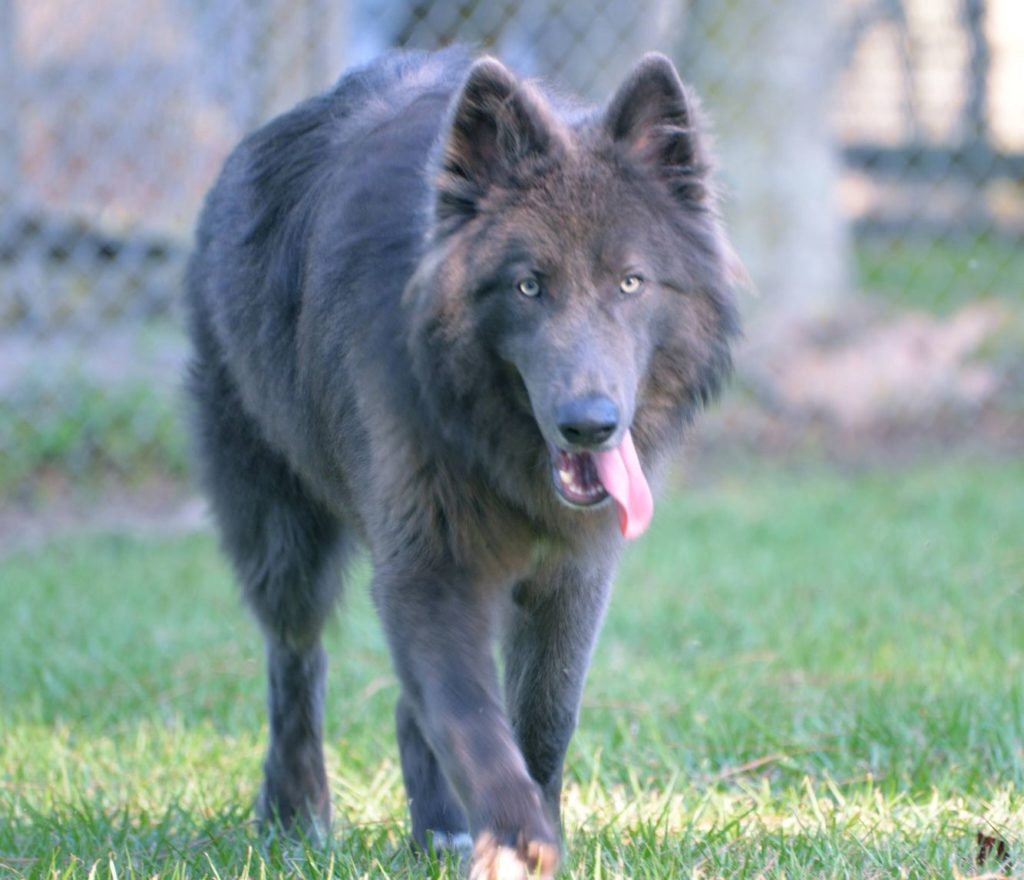 They look nothing like a typical German Shepherd’s dark brown eyes. Their blue coat is a brilliant ashy blue-grey color. This is distinct from the German Shepherd’s numerous blue colors. With time, their fur might become ashier and more silver, giving them a wolf-like appearance. Keep in mind that black and tan or blue and tan puppies will often fade too much lighter colors as they get older.

Their face is framed by a bushy mane, and their ears are naturally pointed and straight. The Blue Bay Shepherd is a big breed. Females weigh 70 to 85 pounds on average, while males weigh 85 to 105 pounds.

These canines have a lot of energy because they are a mix of wolf dogs and Old German Shepherds. They’re incredibly playful and will like and require regular hikes, walks, dog sports, and local park exposure. They make an excellent companion dog. The majority of Blue Bay Shepherds are incredibly affectionate. They’re content to be with their family or friends and aren’t aggressive by nature.

The disposition of Blue Bay Shepherds has been carefully nurtured. All of the dogs in the breeding program are calm, sweet canines who enjoy being around people. This is also true of the wolf-dog hybrids used at the lineage’s inception. They have a sociable disposition and get along well with strangers. 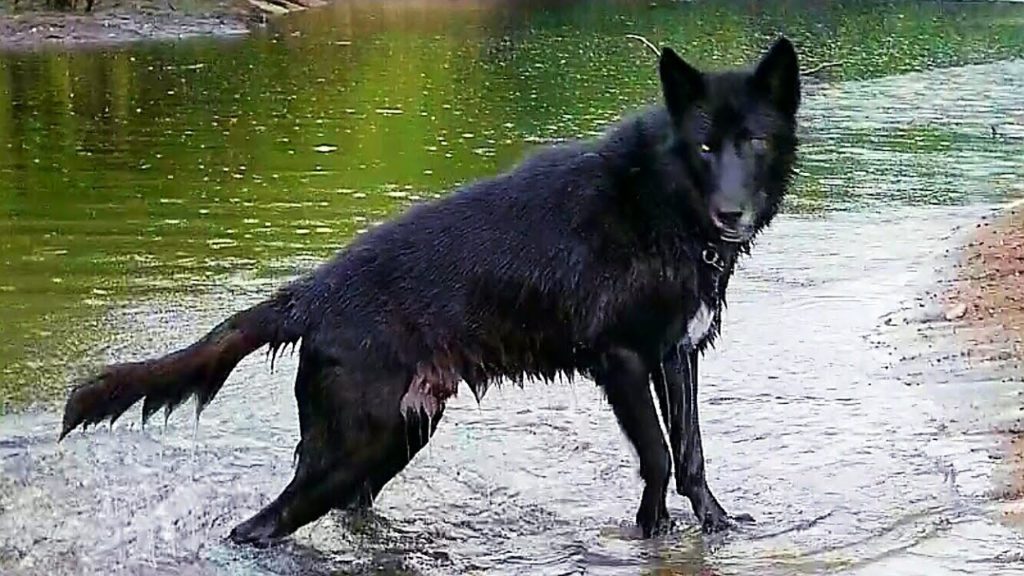 Dogs should be socialized as soon as they have received all of their shots. This socializing stage is crucial for Blue Bay Shepherds because they are part wolf. Leaving this breed alone for lengthy periods of time, especially when they are young, might result in aggressive undesired habits. Shepherd dogs require an active lifestyle as well as a lot of attention.

When left alone, some owners say that they can be destructive in their gardens. Blue Bay Shepherds enjoy long hikes and have plenty of room to run about and play. The Blue Shepherd dog’s coat can be long or medium in length. Both will need to be brushed on a regular basis to eliminate debris and prevent mats from forming.

Hip and elbow dysplasia, as well as vision issues and epilepsy, affect some Blue Bay Shepherds.