In the nineteenth century, the Boxer was developed in Germany. The Bullenbeiszer and the Barenbeiszer, two German mastiff-type dogs, were the Boxer’s forefathers. They were eventually crossed with the Mastiff and Bulldog’s formidable forefathers. Boxers were first used for dogfighting, bull-baiting, cart pulling, cattle herding, and catching and pinning wild boar and bison until hunters arrived.

Georg Alt of Munich bred a brindle-colored female Bullenbeisser named Flora with an unnamed local dog. Lechner’s Box, a fawn-and-white boy from the litter, was named for him. This is thought to be the beginning of the Boxer line as we know it today. In 1895, the first boxing club was established. 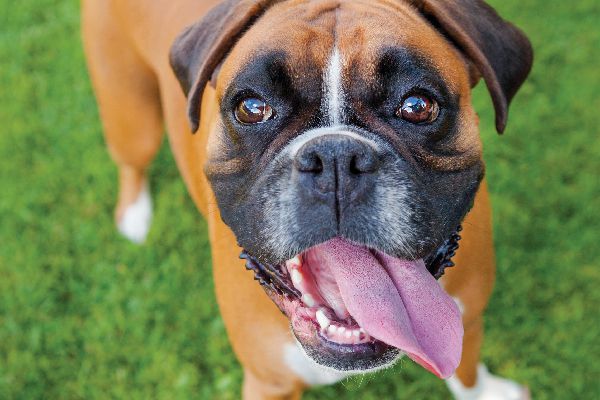 In the late 1890s, the breed gained popularity in other parts of Europe. The first Boxers were introduced into the United States in 1903. The American Kennel Club recognized the first Boxer in 1904. When World War I broke out, they were deployed in the military as courier dogs, pack dogs, and attack and guard dogs.

Soldiers returning from World War II carried their Boxer mascots home with them, and Boxers became popular in the United States in the 1940s. Through them, the breed was exposed to a wider audience, and it quickly established itself as a popular family pet, show dog, and watchdog. The American Boxer Club (ABC) was founded in 1935 and was accepted by the American Kennel Club the following year.

They are huge, powerful canines with square heads. The Boxer’s greatest distinguishing characteristic is its head. It must be in exact proportion to the body, and it must never be too light, according to the breed standard. The most important should be given to the muzzle being in proper shape and proportion to the skull. The ratio of the length of the muzzle to the total length of the head should be 1:3. On both sides of the muzzle, folds run from the root of the nose downwards, and the tip of the nose should be slightly higher than the base of the muzzle.

An underbite exists in the jaw. Dark brown is the color of the eyes. Ears are clipped or left natural, and they are positioned high. Without any dewlap, the neck should be round, powerful, and muscular. When viewed from the front, the powerful front legs are parallel and straight. The muscles in the rear legs are strong. The tail is typically docked and set high. 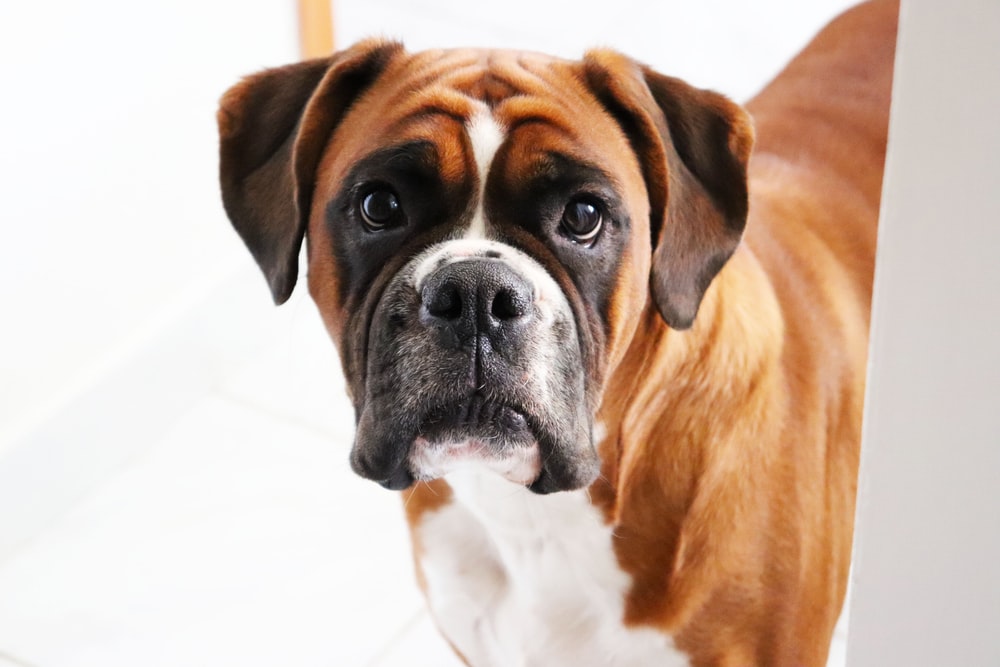 There are no purebred black Boxers since the Boxer lacks the gene for consistent black coat color. Fawn, brindle, tan, mahogany, and black are common colors with white patterns on the short, smooth, close-fitting coat.

The Boxer is a cheerful, bouncy, playful, inquisitive, and vibrant dog. The dog is a good dog for competitive training because it is clever, eager, and quick to learn. It is always on the move and has a strong attachment to the family. Boxers are noted for their ability to get along with children and are loyal and affectionate.

A well-socialized and well-bred Boxer will get along with his own breed as well as other household pets such as cats. Boxers should not be left out in the elements for long periods of time. In the summer, their small nose does not effectively cool hot air, and in the winter, their short coat does not keep them warm.

They are excellent family pets if you give them the physical activity and mental stimulation they require. They can adjust to apartment living if you’re willing and able to supply them with appropriate exercise in the shape of walks or runs, as long as they can remain close to their loved ones.

Socialization ensures that your Boxer puppy matures into a well-rounded, outgoing, and sociable adult dog. The dog coat is easy to care for. They are tidy canines who have been observed to groom themselves in the manner of cats. They shed a lot, but brushing them monthly with a bristle brush or a hard rubber grooming mitt can help keep hair under control.

Cancer, heart conditions such as aortic stenosis and arrhythmogenic right ventricular cardiomyopathy, hypothyroidism, hip dysplasia, degenerative myelopathy, and epilepsy are among the health issues that Boxers are prone to; other conditions that may be seen include gastric dilatation-volvulus (also known as bloat), intestinal problems, and allergies. The average lifespan is 11-14 years.