Chinese Crested Dog Breed are unique in that they’re the only hairless breed thought to have originated in Africa. It is believed that Chinese seafarers took them on ships as curiosities and traded them with merchants all over the world. Therefore, these dogs were able to spread to Turkey, Egypt, South Africa, and Central and South America.

Chinese Crested dogs are part of the family of hairless breeds that includes the Mexican Hairless, Peruvian Inca Orchid, and Chinese Crested. Although many other hairless breeds exist, these four might share a common ancestor. The earliest description of this breed was recorded in 1872 by W.C. Verney in England. Descriptions of this breed are found in records as early as the late 1800s.

In the 1950s, dog breeder Debora Wood created the “Crest Haven” kennel and began breeding Chinese Crested Dogs. She recorded her dogs’ lineage, eventually creating a line of dogs that were true to breed. The famous burlesque dancer Gypsy Rose Lee also bred Chinese Crested Dogs after WWII ended. Upon her dogs were incorporated into Crest Haven. These two lines are the true foundation of every Chinese Crested Dog alive today.

The Xoloitzcuintli (or Xolo for short) is a hairless dog that originated in Mexico. The breed was first recorded in Europe in the 1800s, depicted in paintings and later, photographs, including dogs of the Chinese Crested type. Ida Garrett popularized several types of hairless dogs during the late 1800s.

The Chinese Crested is a fine-boned, slender dog. It is among the most elegant of breeds. There are two varieties: hairless and powderpuff. Hairless crested dogs have soft, silky hair only on their head, tail, and feet. Powderpuff has a soft, silky coat of moderate density and length covering the entire dog. Powderpuff variety has a coat of moderate density that is thick at the neck, shoulders, back, rump, thighs, quarters. 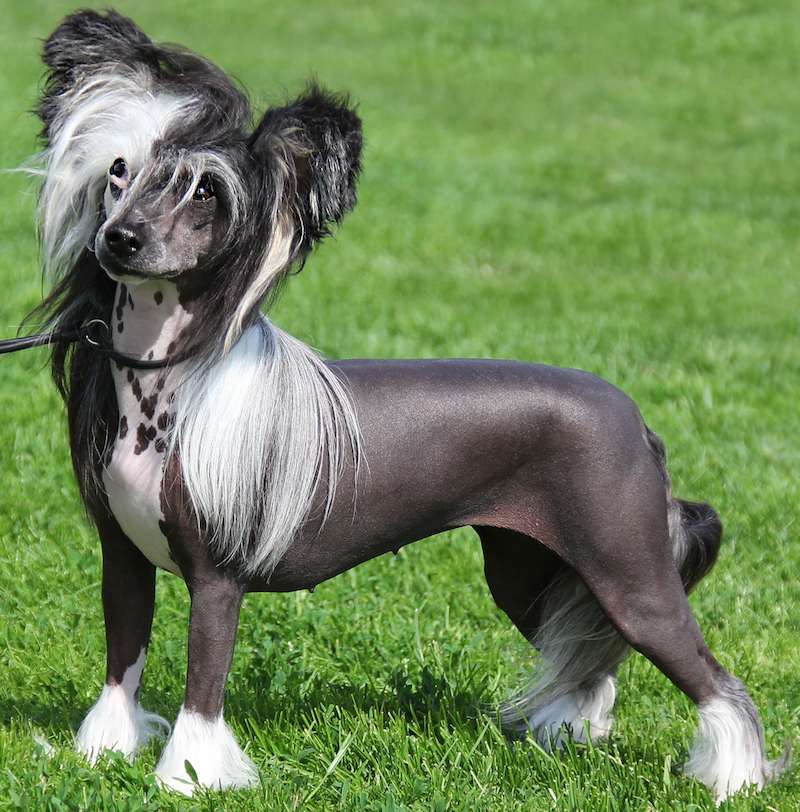 A Chinese Crested has a pair of genes that determine whether it will have long hair or not. With its thin frame, alert expression, and graceful movement, the breed is one of the most elegant in existence. Compared to other breeds, it is slightly taller than its height and moves with an agile gait.

The Chinese crested is a small, alert dog with a thick coat of hair. These dogs stand from 9 to 13 inches at the shoulder and weigh from 5 to 12 pounds. They have round heads with medium-sized eyes and large ears that are frequently held erect or tilted forward. The body is compact, but it has a slightly elongated tail.

The Chinese Crested dog breed is sociable, friendly, and intelligent. It is also an active dog that needs to be exercised daily. When this breed is happy, it will show its happiness by wagging its tail in a very high fashion. 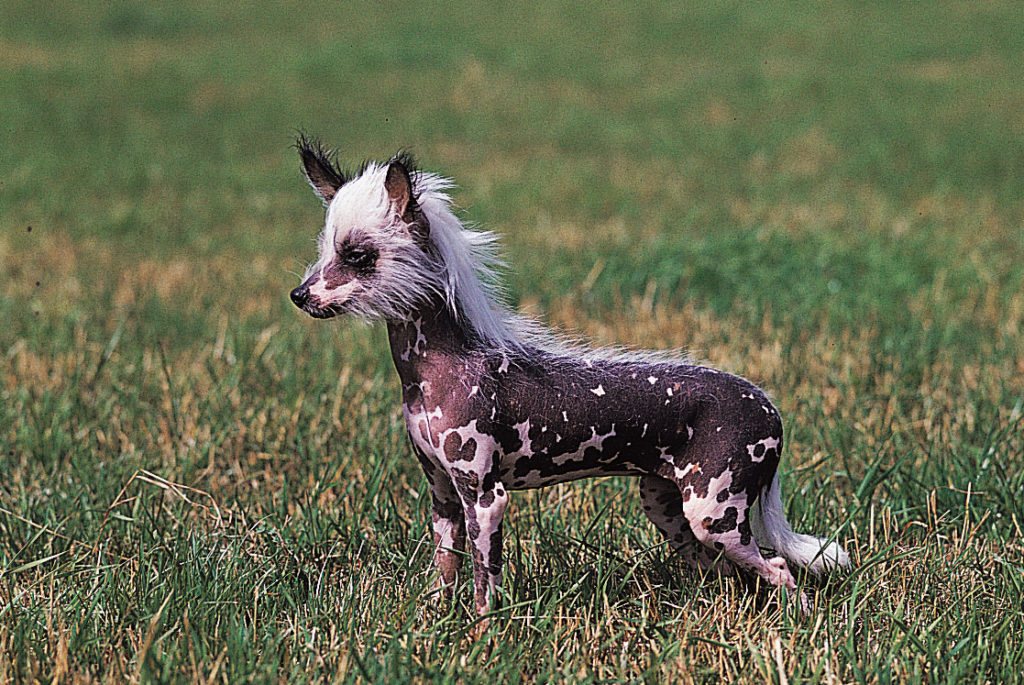 The Chinese Crested is a mix of the pixie, the lapdog, and the sensitive companion. He is devoted to his family and willing to please; he also gets along well with other dogs, pets, and strangers. His demeanor should be full of life and alertness.

The Crested is happiest when he gets to play outside. He does not like the cold, so he will need a sweater for winter outings. A hairless variety can have trouble with the heat. This breed does not do well in outdoor living situations. He is small enough that he can get sufficient exercise with vigorous inside games. 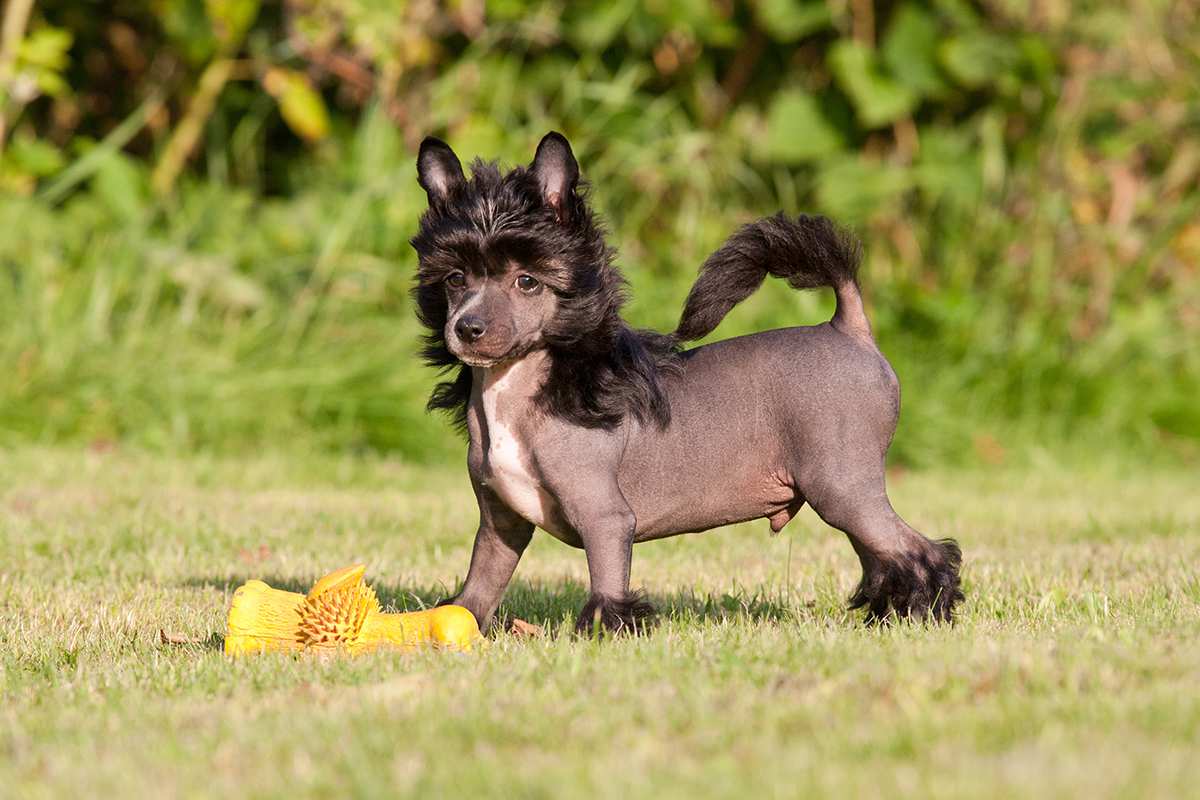 Powderpuff coat care includes brushing every day or two and shaving the muzzle and feet every two weeks. The hairless needs skincare such as moisturizer, sunblock, or bathing to combat infection.

The Crested Dog is prone to minor issues like deafness, patellar luxation, and seizures and major health issues like progressive retinal atrophy (PRA), lens luxation, and glaucoma.  Dogs with flat faces are more likely to have facial disfigurement or an abnormal skull shape These dogs tend to live 13 to 15 years.