The Curly-Coated Retriever is one of the oldest retriever breeds. It has been used for retrieving since the late 18th century in England, where it was developed by crossing many different breeds that were all bred to retrieve. The Curly-Coated Retriever descended from the English Water Spaniel, the St. John’s Newfoundland, and and possibly the Irish Water Spaniel and the Labrador.

The Curly-Coated Retriever is an excellent hunting companion and gun dog. They are often used to hunt duck, quail, pheasant, and upland game. The breed is pretty rare in the USA but more popular in Australia and New Zealand. The first exports to America were in 1907.

As the Industrial Revolution continued, people began to keep pets as companions. The Curly-Coated Retriever was crossbred with the Poodle in the mid 19th century to improve its coat. The resulting dog was both a superb retriever and an excellent companion. It quickly became popular at English dog shows, which led to it becoming one of the most popular retrievers in England.

The Curly-Coated Retriever is a large, strong dog with a slightly longer body than it is tall. Its head is longer than it is wide and its neck is strong, slightly arched and level. The topline of its body is level and the muzzle of the dog is wedge-shaped and tapered, rounding at the bottom. Its nose is black on black dogs and brown on liver dogs, with wide nostrils.

The Curly-Coated Retriever has hanging ears that are small in size compared to the rest of its body. It has large eyes that are almond-shaped and either brown or black in color. The chest is deep, but not too wide. The tail reaches approximately to the hock and is covered in curly hair, which is carried straight or almost straight. 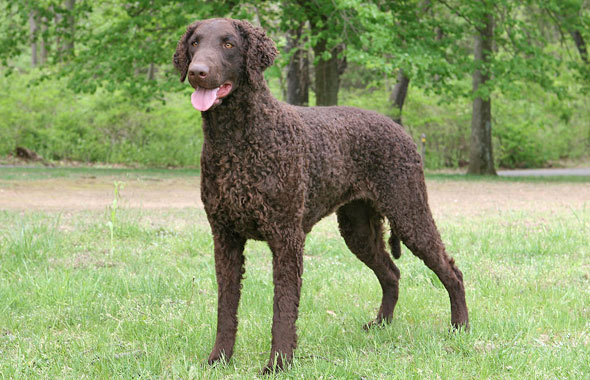 The Curly-Coated Retriever is a breed that craves balance in its life. If it does not get enough exercise, it can become timid or reserved around strangers. It loves to swim, making it a great companion for an active owner who enjoys the outdoors. This breed makes a good therapy dog and is also loyal to its family if they are threatened. 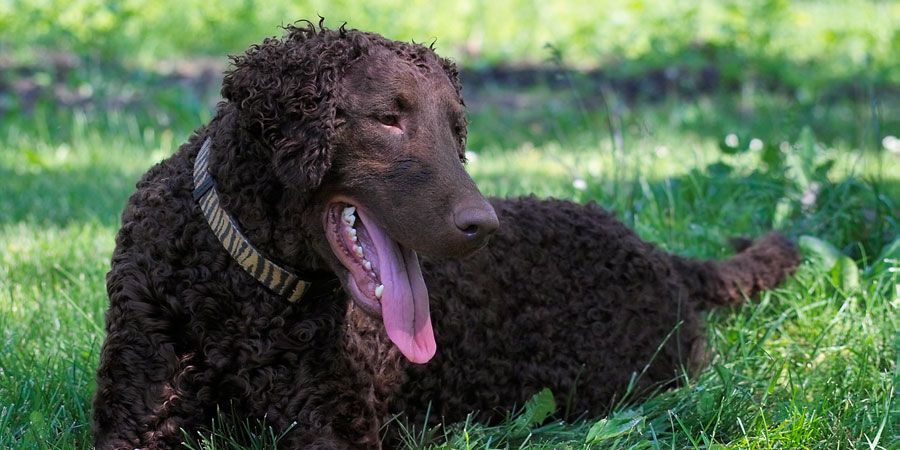 The Curly-Coated Retriever is a loyal and energetic retriever of both land and water. This breed tends to be quite calm indoors, but very active outdoors.

Curly-Coated Retrievers were bred to be a hardy and active land and water retriever that can withstand the rigors of repeated retrieves into thickets or cold waters. Their distinctive coat protects them from briars and cold weather by keeping their skin dry, while the tight curls keep it warm.

In order to properly train a Curly-Coated Retriever, the owner needs to be firm but kind. Being too rough or unclear about rules will not get the job done. The breed is intelligent enough that it requires an owner who is smarter than they are. They do need quite a bit of exercise, but once they have had enough play time, they are satisfy.

The curly coated retriever is a high energy dog that needs a lot of exercise. It should be taken on a long walk, or jog every day to keep its body and mind active. Brushing often will help keep the curls, but it should only be done occasionally, as brushing makes the curls loosen up.

There are many health concerns associated with the Curly-Coated Retriever. Breeds are prone to hip, eye, and heart problems for years. There are some concerns with cancer. The average lifespan of a Curly is 10-12 years.