The Flat-Coated Retriever originated in the mid-19th century in England, when it became popular with gamekeepers. Part of its ancestry is thought to have come from stock imported from North America, where they are known as Newfoundlands, and were brought to British ports by Canadian seafarers.

The Flat-coated Retriever originated in England and was developed as a retriever for both land and water. The dog is primarily a gundog, but it also excels at hunting birds. The breed may have been created by breeding Collie-type dogs with Newfoundland dogs to increase trainability and setter bloodlines to enhance scenting abilities. It was first introduced around 1860 and the final type was established 20 year later. 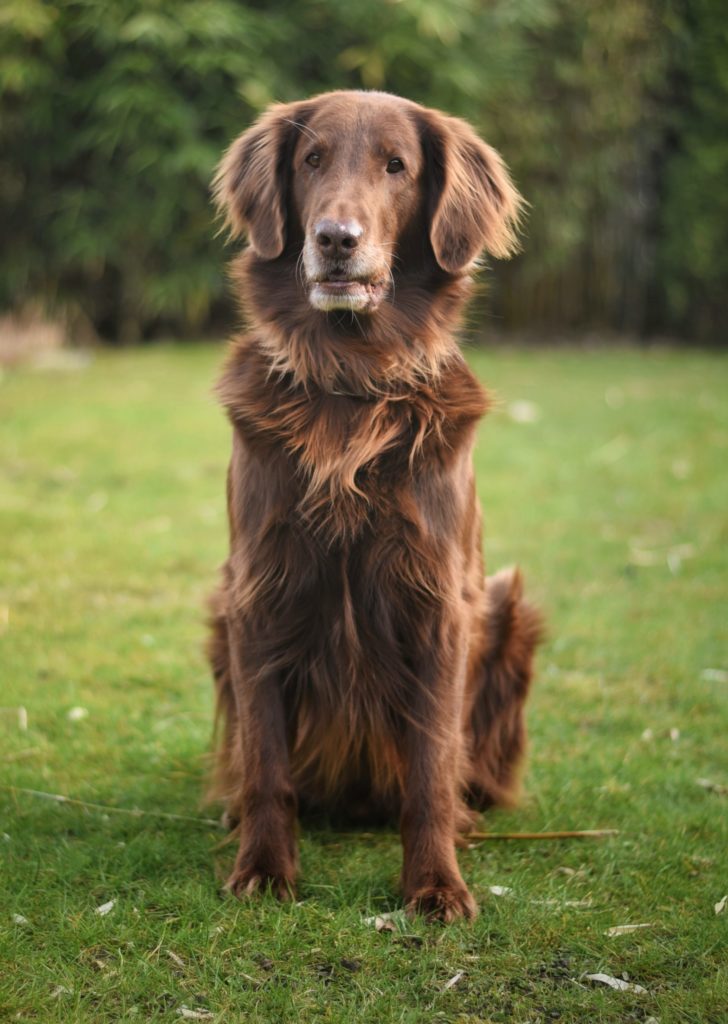 By the late 1800s, cross-breeding with a straighter-haired breed produced dogs that had less water resistance. Crosses to setters and collies of the time were probably made as well. The resulting Flat-Coated Retrievers became very popular. The breed was not recognized by the AKC until 1915, at which point it had already lost popularity.

By the end of World War II, very few Flat-Coated Retrievers were left. The survival of this breed was uncertain. However, in the 1960s, careful breeding brought the population back and the breed became popular once more for both showing and as a friendly dog.

The Flat-Coated Retriever has a muscular body with strong, deep jaws. The muzzle is relatively long and tapers to the nose. This breed has an intelligent expression. The coat is dense, straight, hard and thick with a slight wave over the hips.

The Flat-Coated Retriever’s head is slightly domed, with a broad feathered brow and flat skull. Their eyes are oval shaped and brown in color, while their nose is black or liver colored. The ears are set low on the cheeks and hang close to the head, ending in long feathering that nearly reaches the ground. 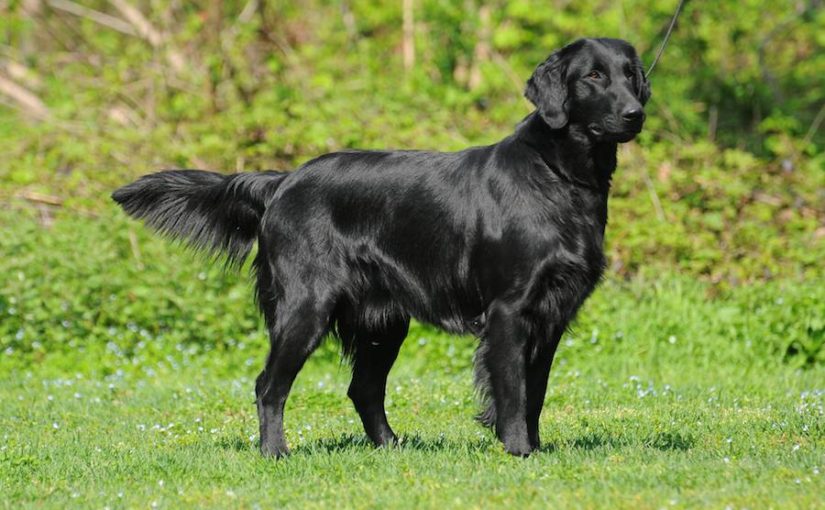 The flat-coated retriever is a medium-size dog with a thick coat, which is flat and tight. The coat makes the dog resistant to water and cold weather while also keeping it light enough to swim. This has made the dog quite versatile, capable of retrieving game over land or in the water.

The Flat-Coated Retriever is a very active, intelligent dog. This breed needs a great deal of exercise and human interaction. They are gentle, loving, and devoted to their family. They make excellent companions for small children as long as they are properly socialized from an early age. This breed is slow maturing and doesn’t reach full maturity until 3–5 years of age. 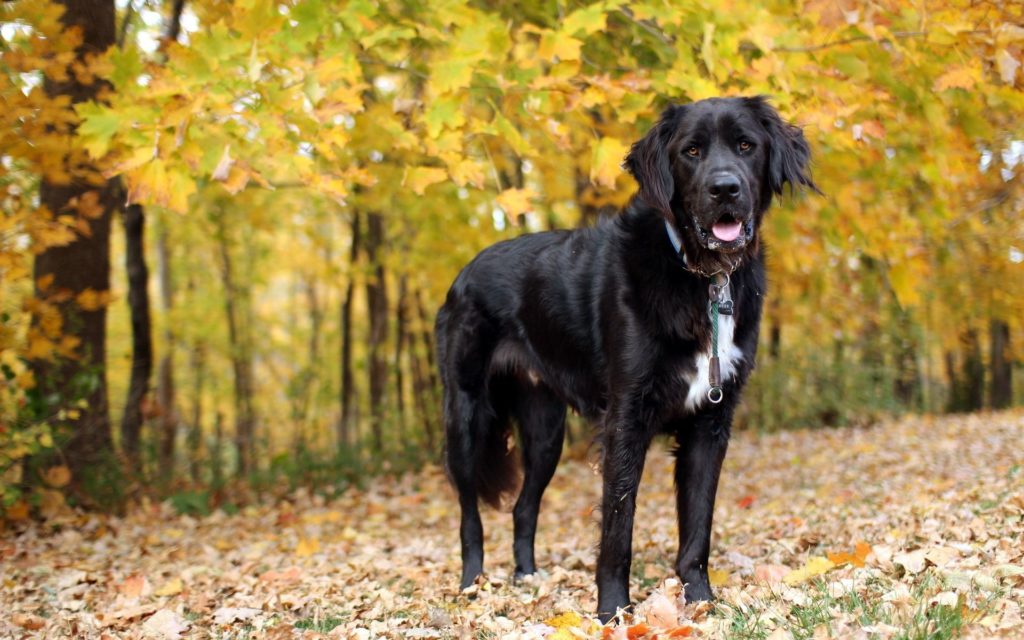 Flat-coated retrievers are generally good with other dogs and cats. They need plenty of exercise and mental stimulation to keep them from getting bored or developing bad habits.

The Flat-Coat retriever needs daily exercise and is very active, especially in water. He is a family-oriented dog that prefers to live inside with his owners. He does best when allowed to play outside every day. This breed is an active sporting dog that requires ample exercise for both physical and mental health. 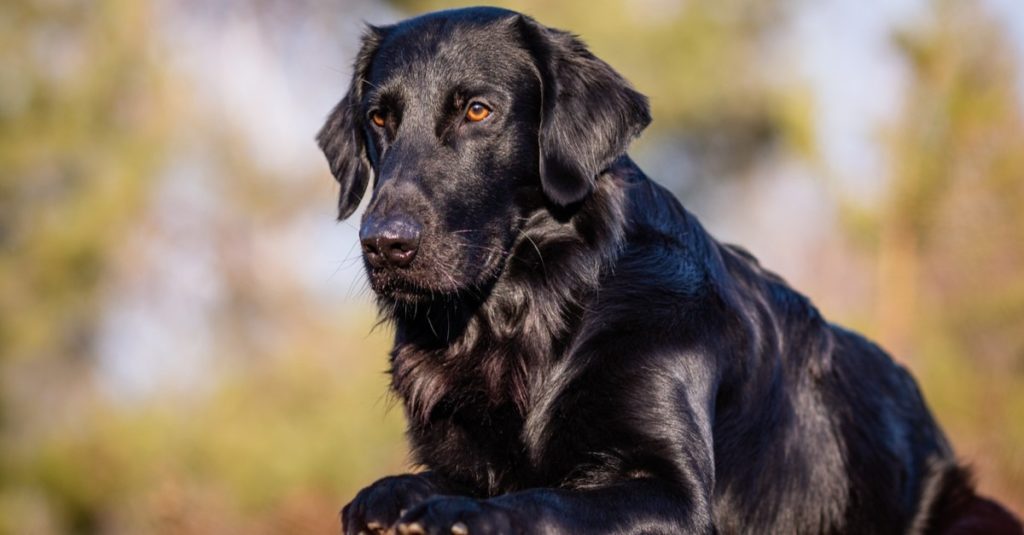 Flat-Coats are very intelligent, responsive, and eager to please. They have a sensitive nature and do not respond well to harsh corrections or training methods. Their moderate-length coat requires weekly grooming with a brush and metal dog comb to remove dirt and loose hair and keep the dog looking his best. The Flat-Coat can be sensitive and should not be over-corrected or trained harshly.

Flat-Coated Retrievers have a higher risk of cancer and other health problems due to their large size and deep chests. Bloat may arise as a result of being overweight or from overeating, especially after exercise. The average life span is about 8 years.