The Basenji Dog Breed is the most primitive breed of dog, discovered in Africa with Pygmy hunters. The dogs were named after the tribes that owned them and the areas in which they were found — such as Zande dogs or Congo terriers — by early explorers. Primitive tribes used these dogs as pack hunters, who wear a large bell around their neck to warn the game of their approach.

The basenji is a breed of dog that traces its roots to the pariah dogs of Africa. The breed originated in the Congo, and then the Egyptians took them into their homes for use as hunting dogs. In 1936, Mrs. Burn brought several Basenjis into England where they were called the “Congo dog” or “Congo derrier but Mrs. Burn gave these dogs their name – “basenji.” “Basenji” means “dog of the bush” in the Congol.

In the late 1800s and early 1900s, many attempts were made to bring African basenji breed to England. All of the animals died from distemper. In the 1930s, a few animals were successfully brought back and bred with other breeds to produce the modern-day basenji breed.

In the early 1900s, they were imported from Africa to America. The breed gained popularity as a pet, and soon after its arrival in America, dogs were brought back to England. The breed’s popularity was modest but steady. In the 1950s, a surge of popularity occurred because of a book and movie that featured this breed. The unique characteristics of this breed have always made it difficult to categorize; they include not barking and yearly estrus cycle.

Their ears are erect to help them locate the game in thick bush and may act as heat dissipaters. This dog’s short coat also aids in dealing with the hot climate of Africa.  It has longer-legged allowing a good amount of speed and the ability to perform the double gallop.

They are considered to be one of the smallest hounds, standing 16 to 17 inches at the shoulder and weighing 22 to 24 pounds. They are leanly built with a deep chest, narrow waist, long back legs, and muscular hindquarters. The Basenji is a short-haired breed that has white feet and legs.

The Basenji is a breed of hunting dog that was bred from stock originating in central Africa. The breed is noted for its cat-like appearance and disposition, as well as its ability to hunt silently. They are energetic, curious, and social dogs that enjoy the company of their owners. They also tend to be reserved with strangers but can become emotionally attached to a single human. Basenjis dislike wet weather and will often refuse to go outside in any sort of damp condition. 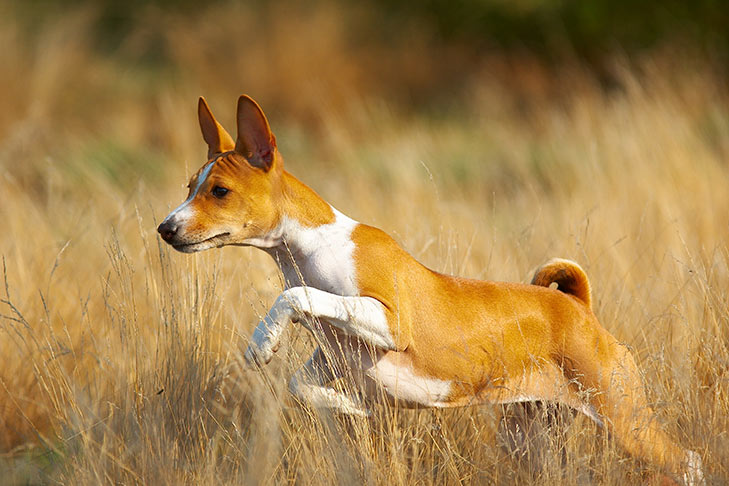 Basenjis are intelligent, active, lively, trainable dogs. They need regular mental and physical stimulation lest they become destructive. They are not mute; they do make several sounds including yodeling, howling, shrieking, and barking.

The Basenji is a high-energy, active dog. They need to be provided with plenty of exercises every day. A long walk followed by a vigorous play or free running in an enclosed area will meet their needs physically and mentally. They enjoy playing fetch or engaging in other types of games such as agility training and lure coursing.

These is a breed of hunting dog known for its intelligence and strong voice. They are fiercely protective of their families and need plenty of socialization to be ideal companions. The breed’s coat needs little grooming, as it tends to stay clean with the swipe of a cloth or brush once or twice weekly. 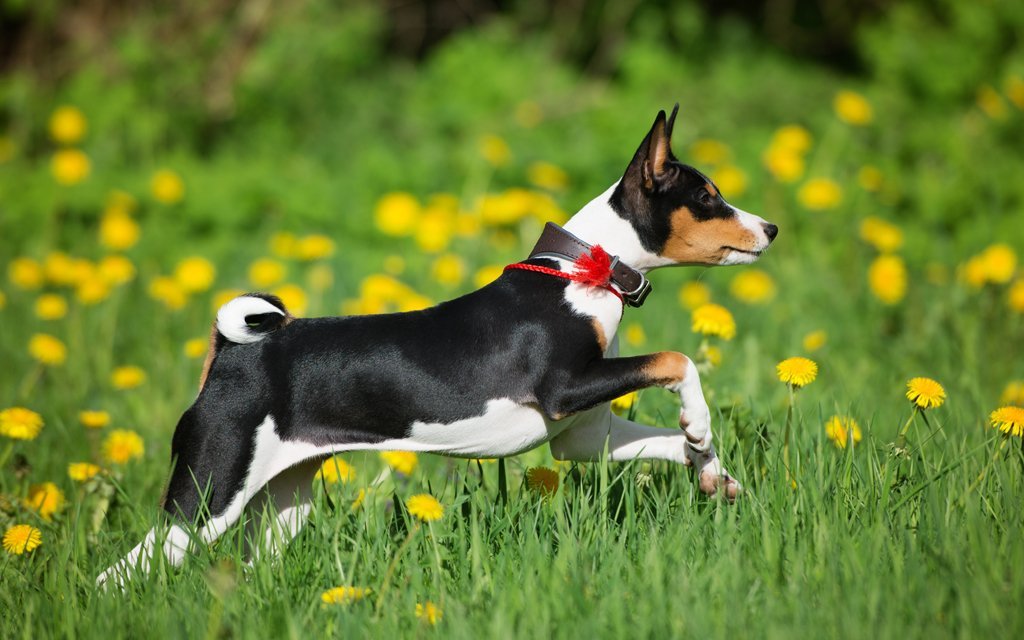 A Basenji breed can be healthy, but it’s prone to some health challenges. Fanconi syndrome, PRA, Basenji enteropathy, CHD, and patellar luxation are a few of the issues a Basenji may face. An average life span is between 12–14 years.