The Irish Red and White Setter is a breed of dog. In the UK, it is classified as a gundog and is included in the sporting group. In America and Canada, it is considered a working gun dog. It has virtually identical use and temperament to the Irish Setter, Gordon Setter, and English Setter.

The Irish Red and White Setter is a breed that almost became extinct. By the end of the 19th century, there were only about three individuals left in existence. However, dedicated breeders revived interest in the dog during the 1920s by breeding it with other retriever breeds. The Irish Red and White Setter are still considered a vulnerable breed because there is approximately total recognition for this breed.

In the past, setters’ dogs were used to indicate where birds were hiding. Hunters would come up behind their dogs and throw a net over the birds. In the 1600s, guns became more readily available and shooting game birds became a popular sport among wealthy landowners. Setters still had to find and point out where the birds were, but they also needed to be steady in order to shoot.

By the 17th century, “setting dogges” (dogs that pointed game) had become established. Breeders began to breed dogs that were suited to the terrain they needed to cover for hunting purposes. This process led to the creation of Setters, which was around 1660. By this time, interbreeding between different-colored dogs was still occurring.

Originally, most Irish Setters were a mix of red and white or mostly white. They were mated with each other. In the breed history, reds and whites have been referred to as Rossmore Setters. The breeds in the 1850s were recorded in England by Reverend Mahon of Castlegar and Yelverton O’Keefe. Maurice Nugent O’Connor and Miss Lidwell also bred these dogs but often misspelled her name as Ledwich. These dogs are known for their working ability in particular.

In the early 20th century, there was a trend for solid red Irish Setters. This led to a decline in red and white setter numbers. The popularity of solid red dogs attracted very high prices, which contributed to the near extinction of Irish Red and White Setters. A handful of breeders kept the breed alive in remote parts of Ireland.

The Gormleys started breeding Irish Red and White Setters under their kennel name “Meudon” in the late 19th century. They proved influential because their dogs, such as the red and whites, were exported to Italy, America, and Holland, as well as to Great Britain. In contrast to these British dogs, the breed has continued to be a working and field trial dog in Ireland. From 1 January 2009, the Irish Red and White Setter were fully recognized by the American Kennel Club (AKC).

The Red and White Setter is larger, has a thicker body, broader head, and shorter peak at the back of his skull. They are athletic, active, intelligent dogs. The coat is short with long silky fringes – called “feathering” – usually found on the ears and legs. 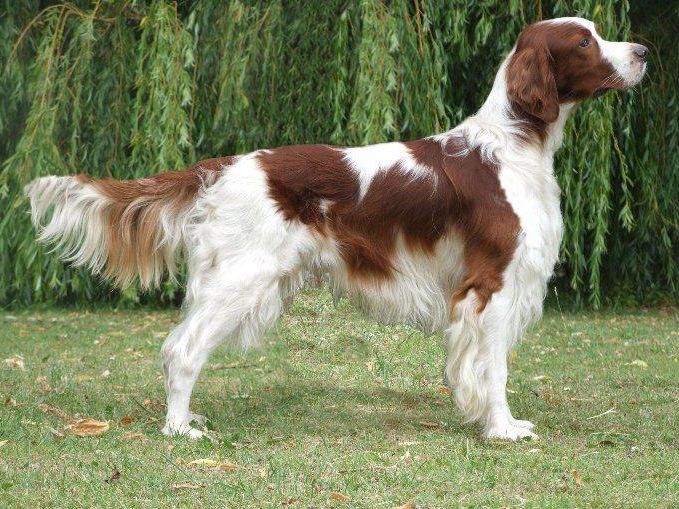 Red and white setters should have a clean, short coat with feathering that is flat and straight. The feathering on this breed of the dog includes the ears, neck, chest, down the back of the front legs, under the belly, and on the back legs. The tail also has long feathering. The red and white setter females are between 57 to 61 cm tall, with males being taller at 61 to 66 cm. They weigh between 23 and 32 kg.

The Irish Red and White Setter is a devoted, affectionate dog that is an ideal family pet. They are highly intelligent and respond well to training but need to have plenty of things to occupy their time. They are happiest inactive families with space for them to run freely. 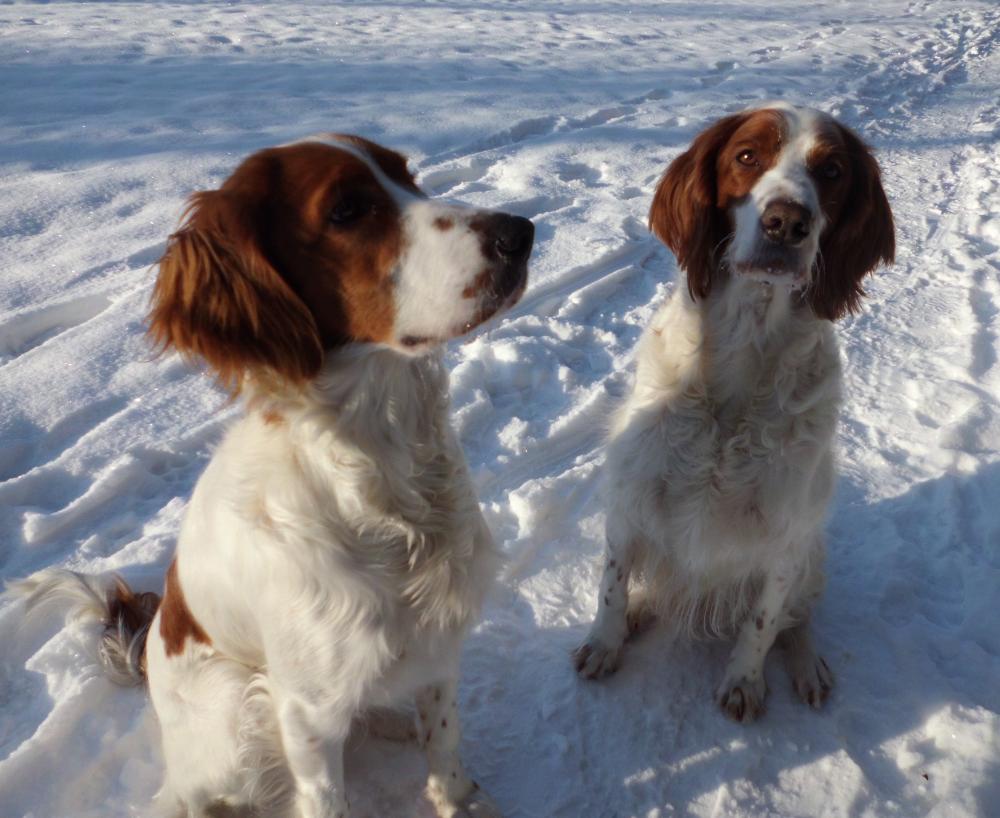 Setters are a group of dogs that were developed to hunt by scent in thick undergrowth. This meant they required enough space and exercise to be able to run hard and fast for a long distance. They tend to behave well around children.

The Irish Red and White Setter is a devoted dog. He is intelligent, energetic, and loves to have a family. Early socialization and puppy training classes are recommended so he knows how to behave with people, other dogs, and pets. It is important to exercise the Irish Red and White Setter a lot because they can get bored easily or become mischievous.

Grooming your dog once a week with a soft brush and comb, or slicker will keep him looking his best. A bath every month or so is usually enough. Nails should be trimmed every few weeks, as needed. 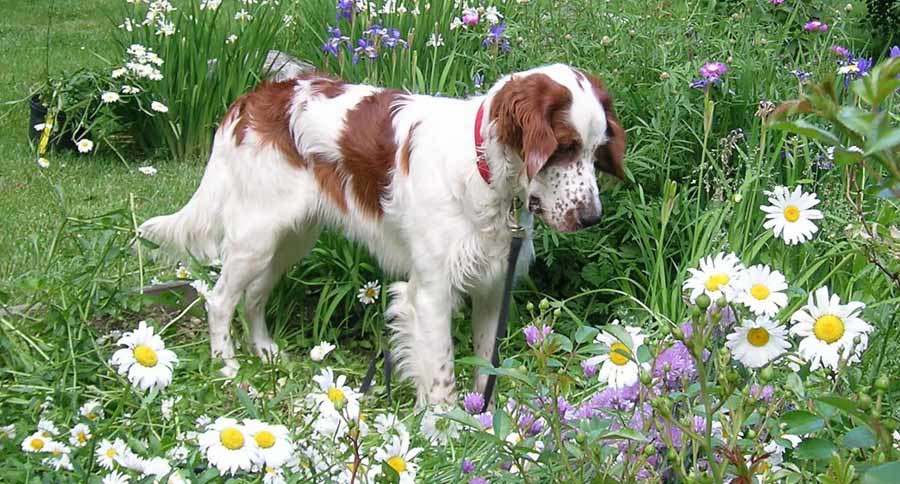 The Irish Red and White Setters are generally healthy dogs, although they can be prone to some health issues. One that presents itself occasionally is posterior polar cataracts, which is a disorder that affects the eye. Another is hip dysplasia, which is a disorder of the hip joints. Other problems include progressive retinal atrophy. They can live an average life of 12-14 years.