LaPerm is a rex breed that originated in the United States and has now spread throughout the world. The LaPerm appeared in the early 1980s as a result of a natural mutation in pest-control cats. The breed has a dominant gene that causes its curly coats, making it genetically unique and unrelated to any other rex cat type.

They’re said to be hypoallergenic cats, causing much fewer allergic reactions in humans than other cats. Linda and Richard Koehl of The Dalles, Oregon, founded the breed after their cat Speedy gave birth to a curly-coated kitten named Curly, from which all LaPerms sprang.

Their curly coat, which resembles a shaggy perm, inspired the breed’s name. Their most distinguishing trait is their shaggy perm-like coat, which is made composed of soft waves, curls, and ringlets. One of the kittens born to a brown tabby barn cat named Speedy in The Dalles, Oregon, in 1982 was bald, with tabby patterns on her skin and large ears spaced far apart. She had the appearance of a small extraterrestrial. Her coat began to expand and she became even more distinctive: it was curly. Linda Koehl, the owner, had given her that moniker.

The cats were identified as being unique from another rex, or curly-coated, cats by geneticists. The curly-coated cats were eventually given breed recognition. They were given the name LaPerm, and The International Cat Association recognized them in 2002. The breed is also recognized by the Cat Fanciers Association. LaPerms are outcrossed to non-pedigreed domestic shorthairs and longhairs to maintain their genetic diversity.

A muscular foreign-type body, medium in size with pretty long legs and neck, is described in the breed standard. The head is a modified wedge with softened curves and a somewhat wider muzzle than the wedge. The straight nose leads to a split between the eyes and a flattish forehead in profile. LaPerms feature medium-large almond-shaped eyes, a broad nose, and flaring ears. The LaPerm is a little cat that weighs between 5 and 8 pounds. 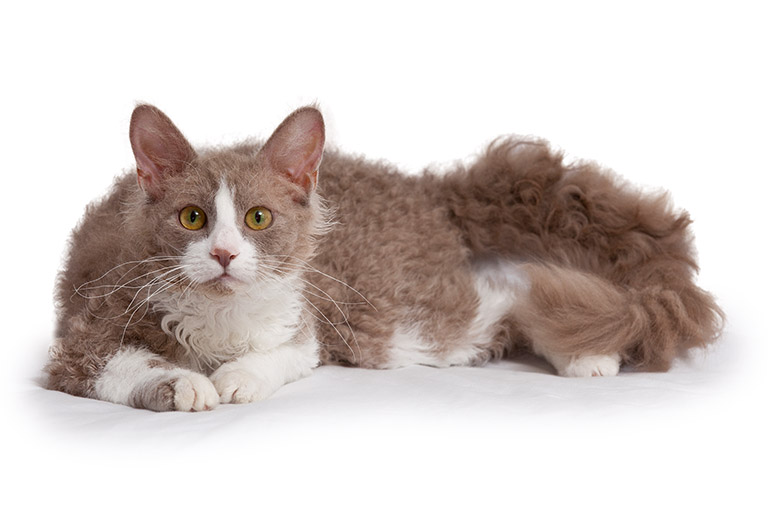 When he is two to three years old, he reaches adulthood. The coat is wavy or curly, with the longest and most distinct curls in the ruff and on the neck, and changes depending on the season and the cat’s maturity. Inside the ears, there is longer curling fur, tufts at the ear tips, and “ear muffs,” which are longer, silky hair on the backs of the ears.

Longhairs have a curly plumed tail, whereas shorthairs have bottle brush tails, and both have long curled whiskers. Along the back, the coat may fall into a natural separation. All colors and patterns are permissible, just as they are for other rexes, though tabbies, reds, and torties are particularly frequent due to their roots. Lilac, chocolate, and colorpoints are all common hues that were selected in the early days of the breed.

LaPerms are known for being extremely loving. They have a sleek and athletic build, and their personalities are affectionate, lively, and extroverted. He is a moderately energetic person who enjoys recovering anything tossed for him. The LaPerm is a normal cat, with a curious attitude, a fondness for heights, and a desire to be a part of everything his family does. He enjoys riding on people’s shoulders or climbing to the top of his cat tree to keep an eye on what’s going on. He is a very active dog, but he will jump at the chance to sit in your lap and be caressed.

If the LaPerm has been properly socialized since he was a kitten, he will enjoy meeting and interacting with your visitors. He’s an excellent fit for homes with older kids who will treat him with care, but toddlers should be watched to avoid pulling his curls. He’s also quite capable of getting along with others.

The coat is simple to maintain. He doesn’t shed much most of the time, but every now and then the LaPerm will have a heavy shed, following which his coat will regrow thicker than before. The only additional upkeep he needs is nail trimming and ear cleaning on a regular basis. comb his unique coat once a week. Keep him inside to avoid being hit by cars, contracting infections from other cats, or being assaulted by other animals.