The Neapolitan Mastiff Dog Breed is a large, powerful dog that was once used as war dogs and gladiators in ancient Rome. Pictures of similar-looking dogs have been found in artworks dating back to 3000 BC. In the 1940s, the breed was rediscovered in Southern Italy and bred as estate guard dogs. They have steadily gained popularity in North America since.

Some heavy-bodied dogs with powerful grips have been known since ancient times. These dogs were used to control livestock, guard homes, or even fight men, lions, and elephants in battle. Around 330 b.c., Alexander the Great disposed of native giant Macedonian war dogs when he conquered lands. He also crossed some with shorthaired.

The British mastiffs were even better gladiators than the Molossus dogs, but when bred together they produced a giant strain of dogs. These dogs, called “mastini” (Italian for mastiffs), were dispersed further in the Neapolitan area in the south of Italy. Mastini were used by estate and homeowners to guard their land.

The Neapolitan Mastiff breed remained virtually unknown to the rest of the world until a chance sighting at a dog show in 1946. A Neapolitan man recognized the breed and asked other fanciers to help rescue it from obscurity.

The Neapolitan Mastiff breed has a huge head with short, powerful jaws and large teeth that can crush or hold an opponent. The skin is tough and hanging, especially the skin on its head, which hangs in heavy wrinkles.

The preferred coat colors are black, grey, and leaden. However, mahogany, fawn, fulvous, hazelnut, dove-grey are also acceptable. All coats can be brindled. Minor white markings on the toes or chest are tolerated. 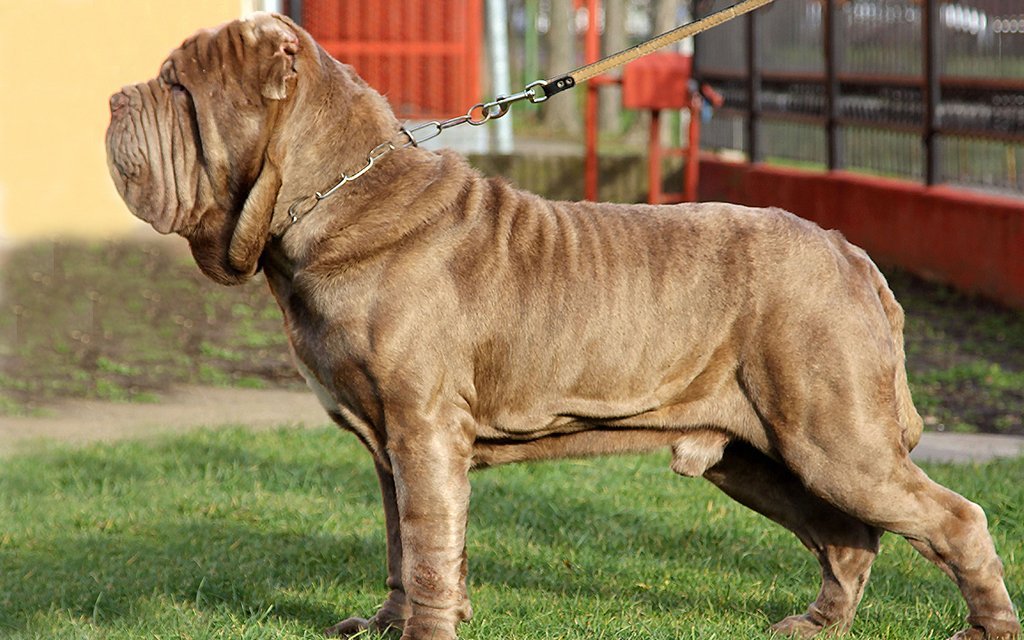 Neapolitan Mastiff is considered to be the most alarming dog, due to its appearance. It’s also said that this look was purposefully bred into them in order for them to scare off intruders without having to act.

The Neapolitan Mastiff is a large and powerful dog. The breed typically weighs between 50 and 70 kg, with females slightly smaller than males. They stand 60 to 75 cm tall at the withers and have a length of about 15% greater than their height.

The Neapolitan Mastiff was bred to watch over its family. It is affectionate toward them and suspicious of strangers, but it also may get along with acquaintances. Its sheer size can lead to accidents with children or other pets. The dog should be carefully socialized at an early age. It does not get along well with other dogs. 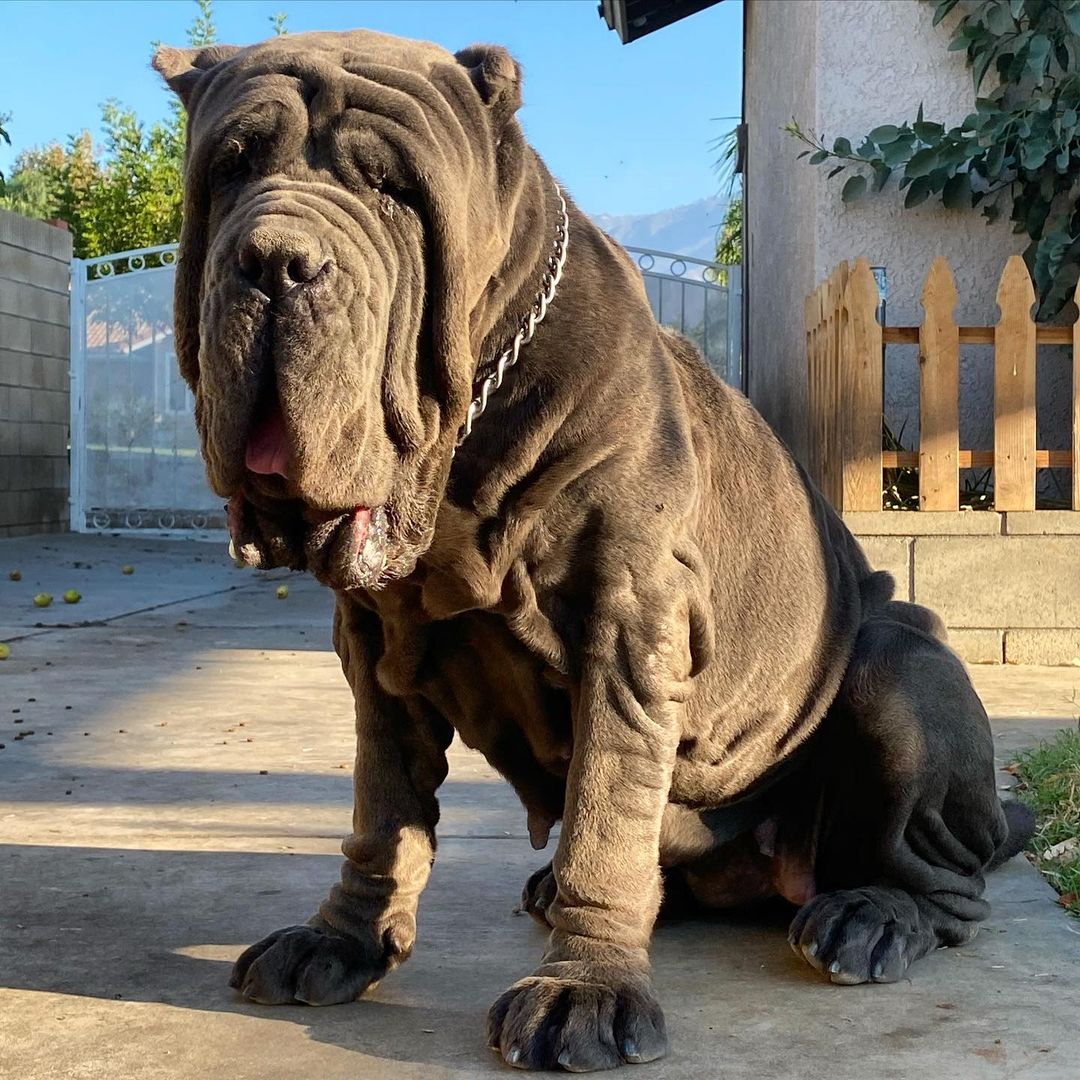 Neapolitan Mastiff adult dogs do not need a lot of exercises and spend most of their time sleeping. They do not need much space at all so long as you are willing to take them for a long walk a couple of times a day. They are fine being left alone for reasonable lengths of time, as long as the owner has put the time into training and socializing them.

Neapolitan mastiffs are a large breed of dog. Training should start early to ensure obedience. As they get older, it can be difficult to get them to listen, so training needs to begin when the puppy is small. They do not need a lot of exercise, but regular walks are important for their health and weight control. 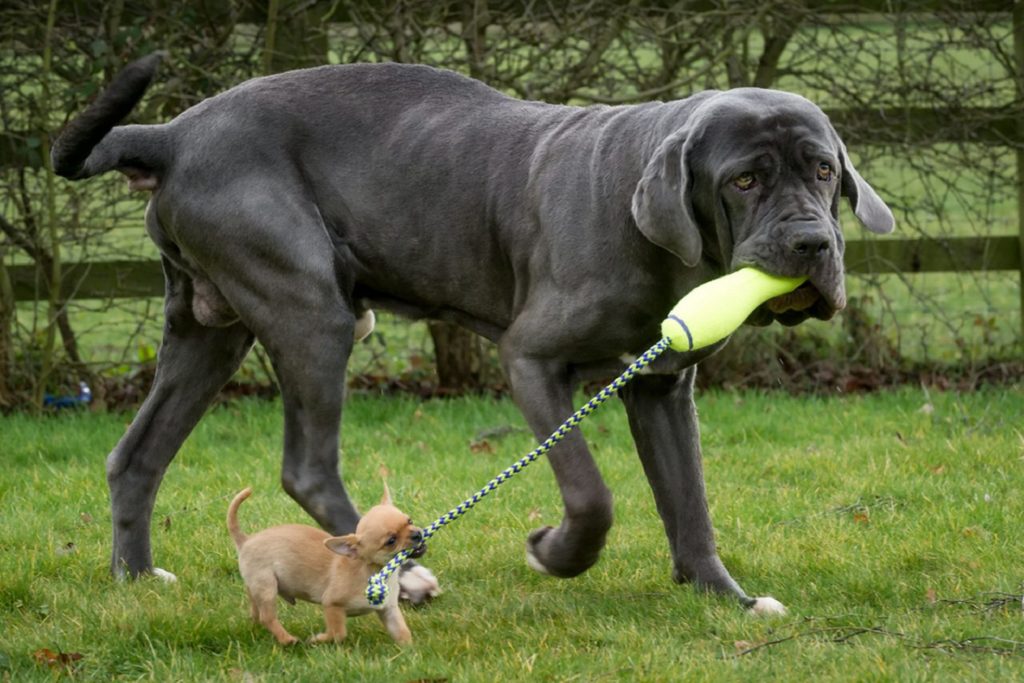 Neapolitan mastiffs are hard to train, as they are not responsive to negative reinforcement or punishment. They respond well to lots of love and treats for good behavior during training.

Neapolitan mastiffs have a coarse double coat, so they are often considered to be one of the most challenging dog breeds to keep clean. Brushing them weekly will help you remove the dead hair and the dirt that accumulates between their fur, which makes bathing on an as-needed basis easier. If you brush your Neapolitan mastiff regularly, baths can be done occasionally.

The Neapolitan mastiff may be a healthy dog but they are prone to several ailments such as hip dysplasia, arthritis, and bloat. They may live an average life span of 8-10 years.