The Rhodesian Ridgeback is a rare southern African creature, derived from crosses between the native ridged Khoikhoi dog and European breeds such as Greyhounds and Terriers.  The Rhodesian Ridgeback is a big dog breed that originated in Southern Africa. Its ancestors can be traced back to the Khoikhoi’s semi-domesticated ridged hunting and protecting dogs, who were known for their heightened aggressiveness in both hunting and guarding responsibilities.

The early settlers of the Cape Colony in southern Africa crossed these with European canines. The Rhodesian Ridgeback was called after the initial breed standard, which was written in 1922 in Bulawayo, Southern Rhodesia (now Zimbabwe).

When the Dutch began dealing with the Cape Peninsula in the mid-seventeenth century, the Khoikhoi people possessed a semi-wild hunting dog that was described by Europeans as fearless and vicious when functioning as a guard dog. By the 1860s, European colonists had brought a number of primarily European dog breeds to this part of Africa, including devoted hunting dogs such as Great Danes, Bloodhounds, Greyhounds, and Terriers.

These breeds were crossed with indigenous African canines, such as the Khoikhoi people’s dog, to produce the Boer hunting dogs. These settlers required a dog that could function as a hunting dog in both high and low temperatures, with limited water, and in rough terrain.

Cornelius van Rooyen of Rhodesia introduced two ridged Greyhound-like females into his lion dog pack in the late 1800s. He discovered that their ridged progeny were particularly adept at approaching and perplexing the king of creatures, allowing the hunter to sight in his rifle and slay his victim.

These ridged dogs were also successful at fending off other dangerous animals like leopards and baboons, running effortlessly alongside horse-mounted riders all day, breaking off to course quick-footed wildlife, and guarding the homestead against all invaders. They were recognized back then and still are now, for their loyalty to their families, as well as their tolerance and compassion for their children.

The Rhodesian Ridgeback, which is slightly longer than tall, combines speed, power, and endurance. The ridge of hair running up the back of the Rhodesian Ridgeback in the opposite direction from the rest of its coat is its defining trait. It’s made up of two whorls of hair that form a fan-like area that tapers from just behind the shoulders to the level of the hips. Ridgebacks can have a black mask on occasion. 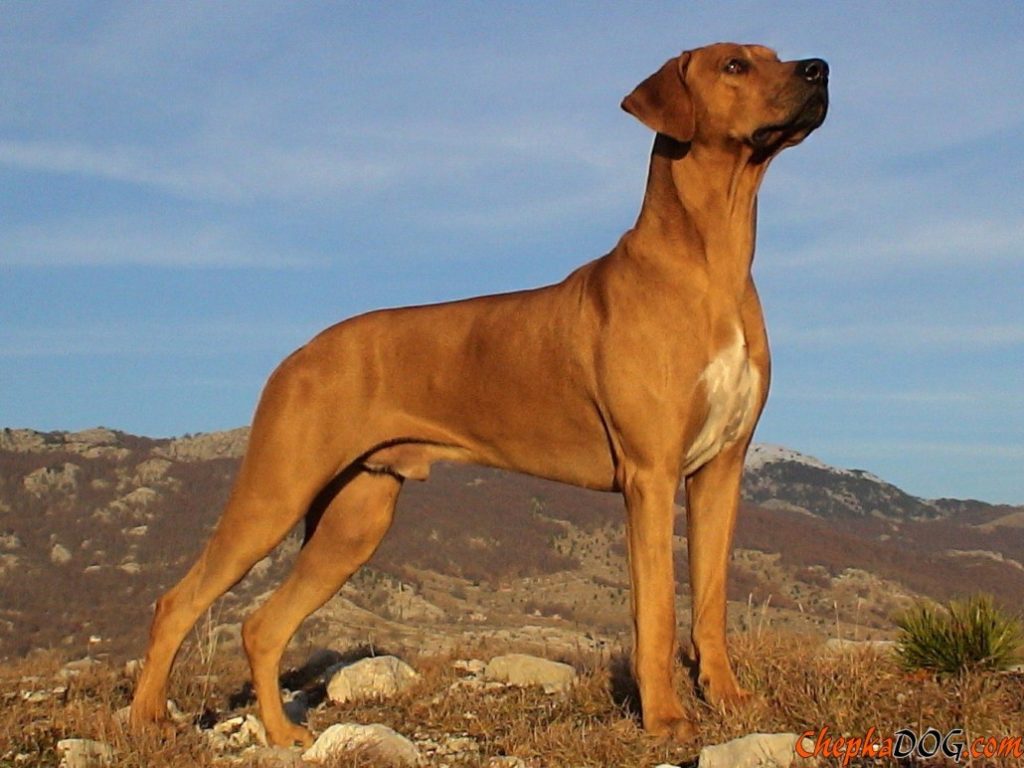 The nose of the dog should be black or liver in color to match the dog’s coat. No other color noses are permitted. Brown nose is caused by a recessive gene. The eyes should be spherical and reflect the dog’s color: dark eyes with a black nose, amber eyes with a brown (liver) nose.

Ridgebacks are typically muscular, with a light wheaten to red wheaten coat that should be short, dense, sleek, and glossy, rather than woolly or silky. Male ridgebacks stand 25–27 inches tall at the withers and weigh over 40 kg, while females reach 24–26 inches tall and weigh around 32 kg. They have a short, shiny coat that allows them to live in hotter regions. The well-defined ridge, which begins with two similar whorls slightly below their shoulders and taper to the predominance of their hipbones, is a distinguishing trait.

Rhodesian Ridgebacks are noted for being intelligent and devoted. They are usually reserved around strangers; this is not to be confused with aggression; a well-behaved Rhodesian Ridgeback will not attack a stranger for no reason. They are sometimes not the ideal choice for rookie dog owners because they demand continuous training and proper socialization. 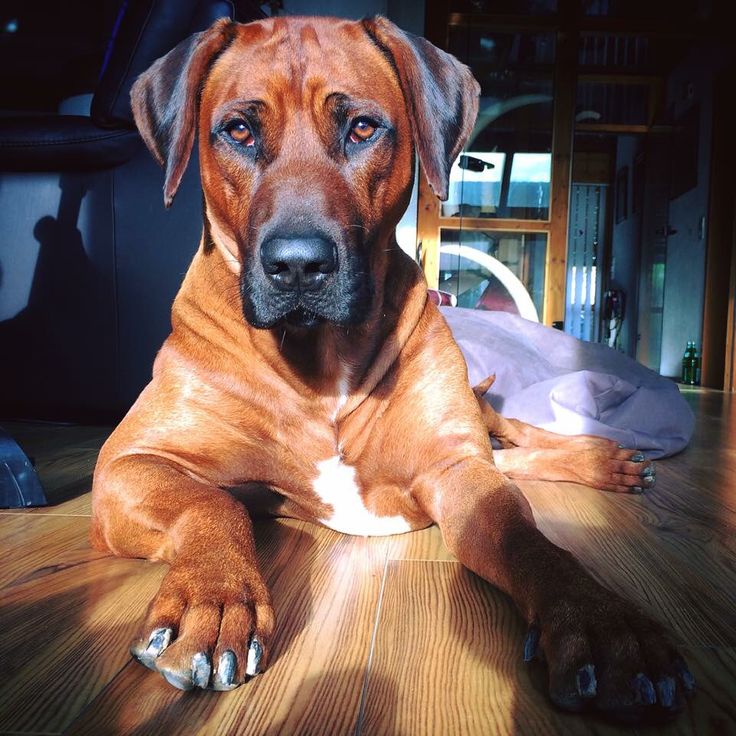 Despite their athleticism and occasionally intimidating appearance, Rhodesian Ridgebacks have a sensitive side. With that kind of treatment, they fall apart. Correction is acceptable to the Rhodesian Ridgeback as long as it is fair and warranted, and it comes from somebody that dog knows personally.

Hip dysplasia and dermoid sinus are two health issues that are known to plague this breed. 11-13 years is the average lifetime.