The basking shark, also known as Cetorhinus maximus, is the second-largest living shark, after the whale shark. It is one of three quiet sharks that filter feed on plankton. Whale sharks and megamouth sharks are the other two plankton feeders. The basking shark is the only living member of the Cetorhinidae family, which belongs to the Lamniformes order of mackerel sharks.

Basking sharks used to be abundant in the world’s oceans, but their numbers have been slowly dropping for decades and are still declining. Despite their long history in the world’s waters, less is understood about this passive sea giant. About a century ago, basking sharks were a common species. They are docile and unafraid of boats or people, making them ideal prey for fishing boats.

The basking shark has the smallest brain of all the sharks when compared to its size. Basking sharks can take up to five months to lose and renew their gill-rakers. The name “basking shark” comes from the fact that they feed by swimming slowly and methodically near the surface. They look to be soaking up the rays of the sun.

They have a lamniform body plan, which has led to them being misidentified as great white sharks. The basking shark’s cavernous mouth, which can be up to 1 m (3 ft 3 in) wide, longer and more apparent gill slits that fully encircle the head and are supported by well-developed gill rakers, smaller eyes, significantly greater overall size, and lower average girth distinguish the two species. Only the first three or four rows of the upper jaw and six or seven rows of the lower jaw function in basking sharks, which have teeth that are 5–6 mm (0.20–0.24 in) long and hooked.

An adult basking shark weighs in at a massive 10,200 pounds and reaches a length of 26 feet. In 1851, the largest basking shark ever recorded was caught in a fisherman’s net in Canada’s Bay of Fundy. It was 40.3 feet long. No one could weigh it at the time, but the basking shark was estimated to weigh 45,800 pounds. A sharply keeled caudal peduncle, finely textured skin covered in placoid scales and a mucus layer, a pointy nose noticeably hooked in younger specimens, and a lunate caudal fin are all distinguishing features. Dorsally, the coloration ranges from dark brown to black or blue, fading to a dull white ventrally.

The basking shark is a coastal-pelagic shark that can be found in boreal and warm-temperate waters all around the world. It inhabits the continental shelf and sometimes ventures into brackish water. It can be found from the surface down to a depth of at least 910 meters (2,990 ft). It loves temperatures of 8 to 14.5 °C (46.4 to 58.1 °F), however, it has been observed crossing the equator’s much warmer waters.

It is frequently spotted close to land, particularly in bays with tight entrances. The shark is typically visible at the surface because it follows plankton concentrations in the water column. It follows the seasons and migrates accordingly. During the summer and winter, basking sharks travel thousands of kilometers in search of the richest zooplankton patches, which are commonly found along ocean fronts. 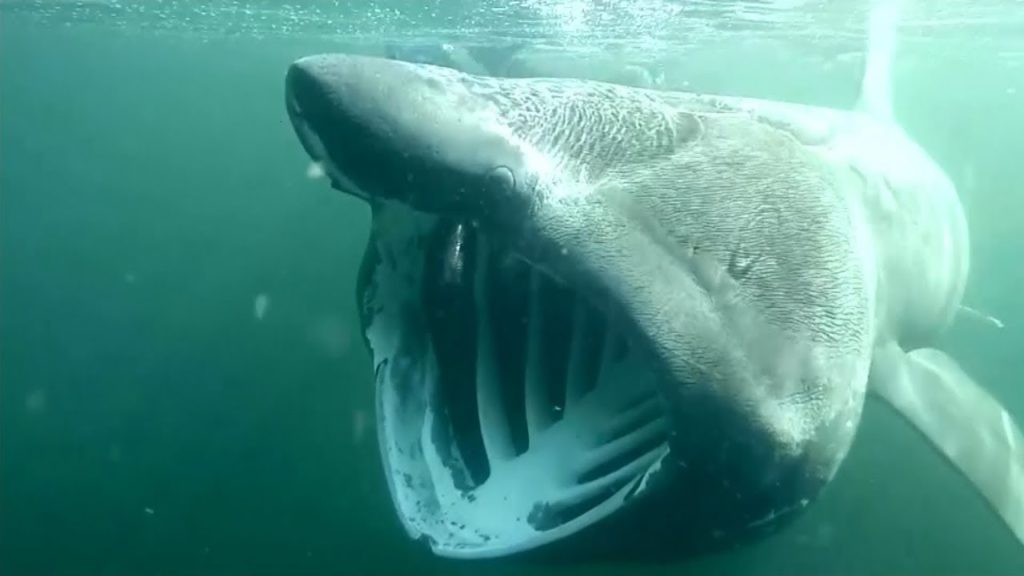 Basking sharks are normally alone, but they congregate in dense patches of zooplankton during the summer months, where they engage in social behavior. They can form sex-segregated shoals in small numbers, but up to 100 individuals have been documented. The basking shark is a huge, slow-moving shark that may breach and leap completely out of the water. It’s possible that this behavior is an attempt to evict parasites or commensals. They’re slow-moving sharks who aren’t drawn to bait.

Zooplankton is a favorite food of basking sharks. The species pursues thick colonies of plankton near the surface as a filter feeder. When they feed, they open their enormous mouths and glide over the clouds of plankton, removing the small plankton with their gill rakers. A basking shark has the ability to filter millions of gallons of water every hour.

When a female basking shark conceives, her shark pups feed on other unfertilized eggs in her womb, a process known as oophagy. Surprisingly, the right ovary of a female is the only reproductive organ that works. Females will carry their puppies for one to three years and give birth to a number of offspring. When the pups are born, they have fully matured sharks with a maximum length of five feet.