The Alaskan Malamute is a huge breed of dog that was bred for strength and endurance as sled dogs and hounds to pull heavy freight. Other arctic, husky, and spitz breeds are comparable to them. Mrs. Eva B. Seeley was substantially responsible for obtaining breed recognition in 1935. Many dogs at the time were of unknown ancestry. Others were weeded out, while those that appeared to be purebred were used for breeding.

The Malamute and other sled dogs became immensely useful to newly-arrived prospectors and immigrants during the Klondike Gold Rush of 1896 and were regularly crossbred with imported breeds. This was frequently an attempt to improve the type or compensate for the scarcity of true Malamutes for sale.

The Alaskan Malamute emerged in the Arctic, where harsh environmental circumstances created the breed. The breed’s history is uncertain, however, it was initially documented among the Mahlemuts, a native Inuit people that resided along Alaska’s northwest coast’s Norton Sound. Mahlemut is derived from Mahle, an Inuit tribe name, and mut, which means village. 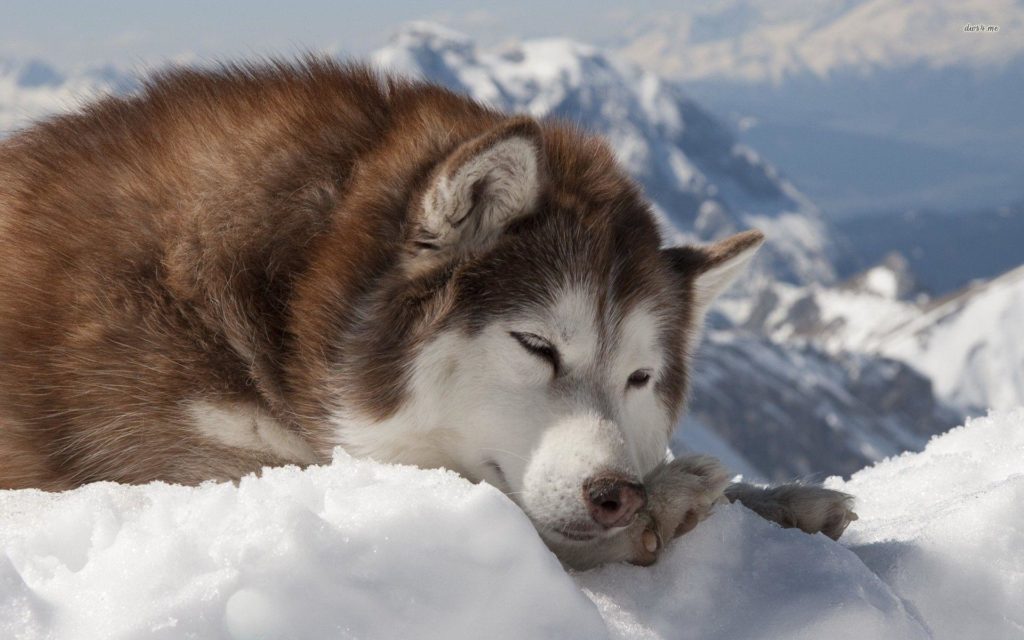 The dogs were used as hunting companions for large games and to transport hefty items back home. Because these canines had to be enormous and muscular rather than swift, they were able to do the labor of many smaller dogs with just one. They were an important part of these people’s lives and were considered nearly like family members, albeit they were never treated like pets.

A New England dog racing enthusiast acquired some nice examples in the 1920s and began breeding traditional Malamutes. Some were chosen to assist Admiral Byrd in his 1933 expedition to the South Pole as the breed’s fame rose. The Malamute was called into action once more during World War II, this time as transport carriers, pack animals, and discovery dogs.

In 1935, the breed was recognized by the American Kennel Club (AKC), ushering in a new era as a powerful show dog and devoted pet. The breed was nearly extinct due to losses incurred during World War II. The studbook was reopened in 1947 when it was anticipated that just about 30 registered dogs remained.

Robert J. Zoller grew interested in the breed and used this chance to create the Husky-Pak line by combining M”Loot and Hinman/Irwin puppies with selected Kotzebue. All modern Malamutes are descended from the early strains and exhibit a variety of features to varying degrees. As a result, we now have natural differences. 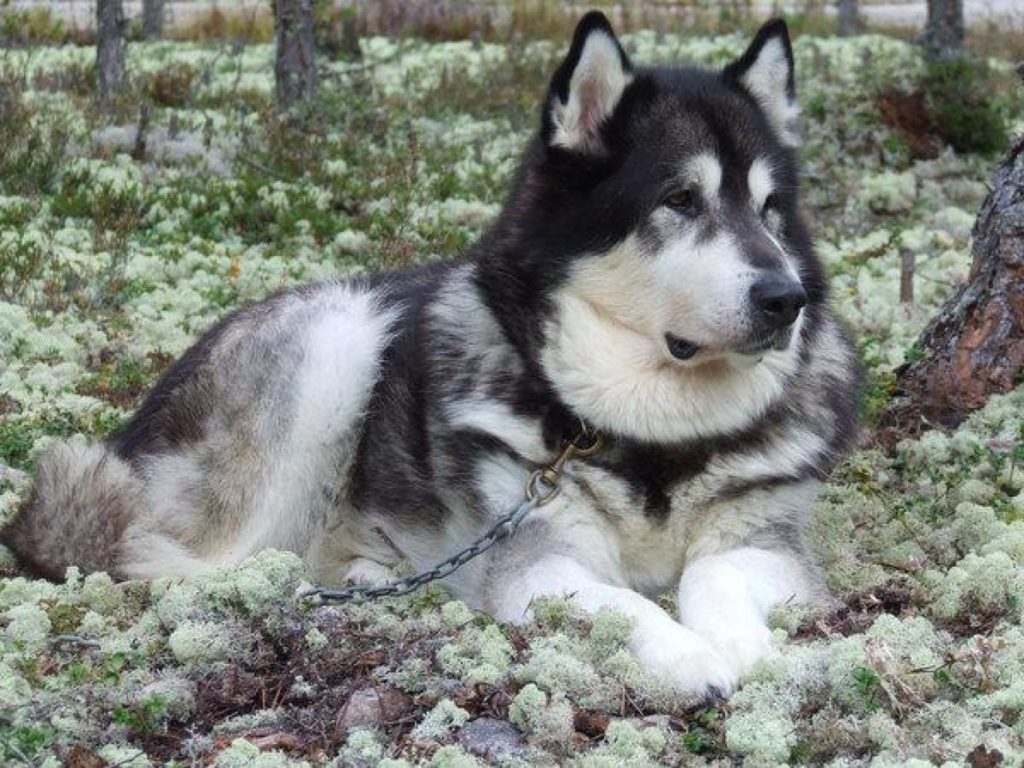 The muzzle is large and deep, with a little taper from the cranium to the nose. Although the nose and gums are black, some Malamutes have a snow nose, which is black with a pink undertone that varies in intensity depending on the season. The Alaskan Malamute’s eyes are almond-shaped and come in a variety of brown colors; nevertheless, the darker eye is preferable.

The undercoat is greasy and fuzzy in texture, and it can be up to two inches thick. The outer guard coat is coarse and stands longer at the withers than at the sides of the body, but not more than one inch. Gray and white, sable and white, black and white, seal and white, red and white, or solid white are the most common colors.

According to their roots and upbringing, malamutes can have a high prey drive. This could mean that they would chase smaller creatures such as other dogs, rabbits, squirrels, and cats in some situations. While Malamutes are generally friendly towards people and can be trained to tolerate small pets, they should be kept away from small animals and children.

Malamutes have a strong affection for people, which makes them popular as family dogs, but they are unreliable watchdogs because they do not bark. Malamutes are agile around furniture and other tiny items, making them great house dogs if they get enough exercise outside. 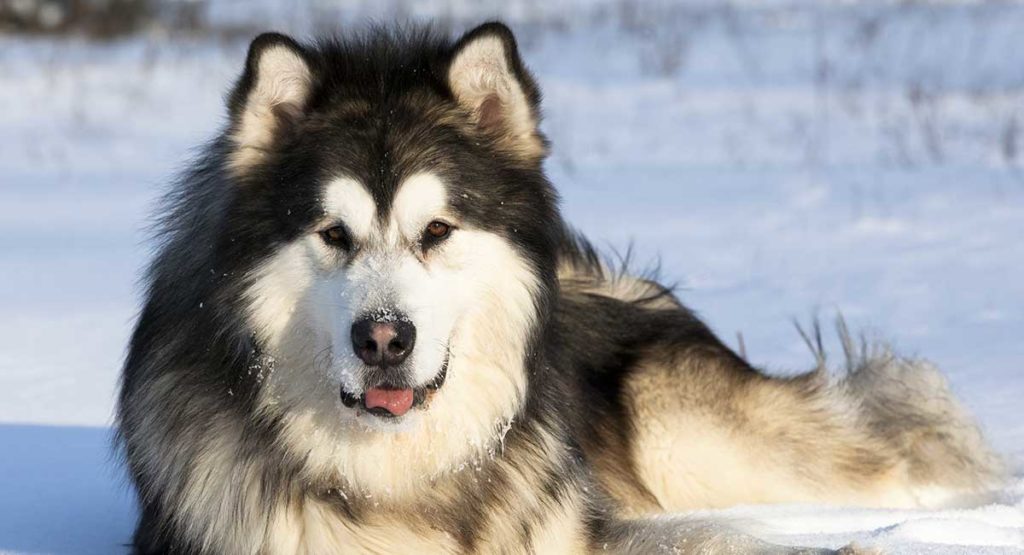 The Alaskan Malamute enjoys the cold and, in particular, the snow. They have the ability to run for miles and require daily exercise in the form of a lengthy leash walk or the option to run. Brush the coat once or twice a week or more frequently if it is shedding. To avoid shedding at all times, greater precautions must be taken.

Musculoskeletal (hip dysplasia) and inherited cataracts were the most commonly reported health issues among Alaskan Malamutes. Seizures, prevalent in early puppies as well as adults, epilepsy, congenital heart problems, kidney problems, and skin disorders are among the other health issues in the breed, Elbow dysplasia, hereditary polyneuropathy, osteochondrodysplasia, cerebellar hypoplasia, heart anomalies, and eye problems are among the other health issues that Malamutes face. It is possible to live for up to 15 years.