The black neon tetra is a freshwater fish belonging to the Characiformes order and belonging to the Characin family. It is native to southern Brazil’s Paraguay basin. They’re common in the aquarium industry. This species was named after pet-book publisher Herbert R. Axelrod (1927-2017), whose Tropical Fish Hobbyist magazine published this and other Géry descriptions.

The black tetra is a common name for the black neon tetra, however, that name actually refers to a distinct species, Gymnocorymbus ternetzi. These fish like small streams, creeks, wet forest regions, and sandbanks in the wild. The water in their natural habitat is usually quite acidic, and the tannins generated by decaying organic material colour the water brown. 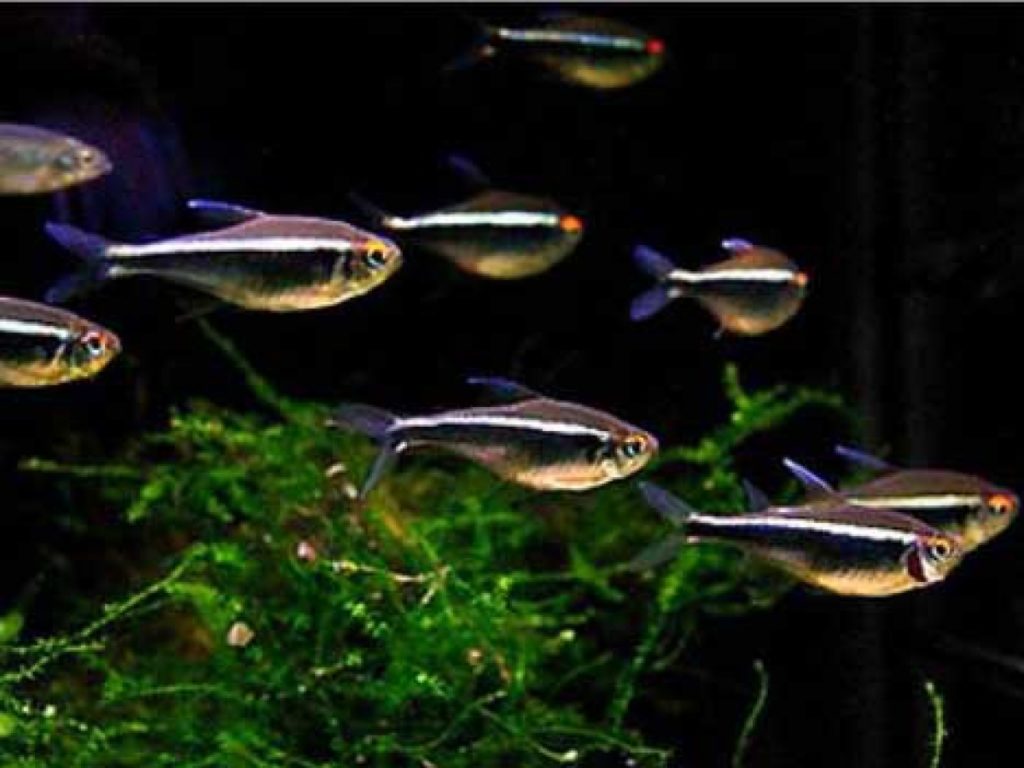 The black neon tetra is a peaceful and quiet creature. They don’t have any aggressive tendencies. Males are rarely territorial, even in groups, a tendency that is frequent in other species. When it comes to groups, it’s crucial to remember that Black Neon Tetras are schooling fish. The group will spend the day together exploring the tank.

Frequently move in tandem, resulting in a beautiful expanse of black color across the tank.  They wish to remain in groups, although they are not completely reliant on one another. The group may split up from time to time to allow the individual fish to conceal and recuperate.

This species has the appearance of a normal elongated tetra, with a plain basic colour and two noticeable longitudinal stripes, white above black. The top of the eye features two thin but distinct color bands, red above yellow. It reaches a maximum overall length of about 4 cm (1.6 in). These fish are slim and tiny. Their body is formed like a torpedo, with a rounded head and translucent fins. The Black Neon Tetra’s primary colour is somewhat muted. They have a faint greenish tint to them. Two bright stripes contrast with the foundation color. The first is an iridescent white streak. 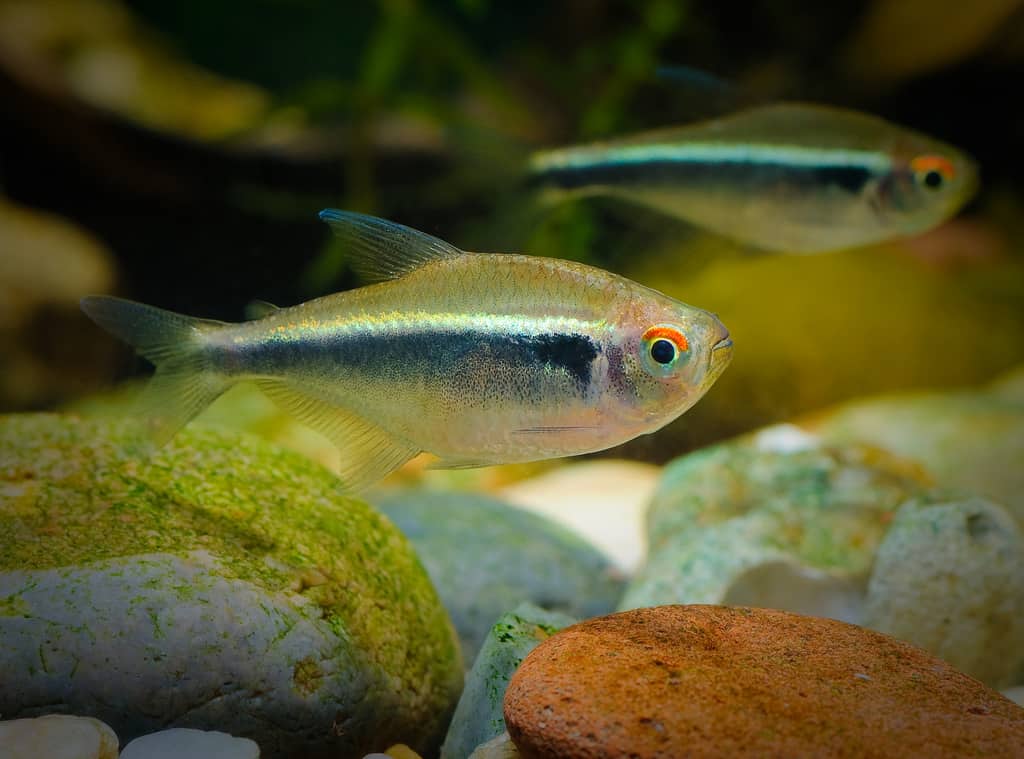 It glistens in the light and creates a magnificent impression. A thicker band of black runs directly beneath that stripe. The name of the fish comes from this stripe. Both stripes go horizontally down the length of the fish’s body. It stretches from the gill cover to the tail fin’s base. In black neon tetras, there are no evident sexual distinctions. The female’s belly is often larger and rounder than the male’s. When a female reaches sexual maturity, her lower abdomen fills with eggs.

Black neon tetras require soft acidic water that must be kept clean at all times. Live plants, a darker substrate, and open water for swimming should all be included in their tank. Groups of black neon Tetras should be kept. They are quite adaptive and tolerate hard neutral water better than other tetra species.

Subdued lighting, living plants, free room for swimming, a dark substrate, and a healthy water current in the mid to upper area of the aquarium, where they prefer to swim, are all great conditions for the black neon tetra. Use river sand as the substrate, along with some driftwood and twisted roots. Fill the tank with dried leaves, which will turn the water a pale brown color.

If the water quality is good, black neon tetras can spawn quickly. Condition the potential parents with good food before intending to breed the black neon tetra. Fish that are roughly a year old are good for reproducing. The sex of the fish is identified by its body form, which is significantly deeper and plumper in females than in males. Even though the black neon tetra can be kept in water that is harder and more alkaline than its natural environment, it must be housed in water that is closer to that of the River for breeding. Breeding the Black neon tetra necessitates acidic water with a hardness of no more than four. 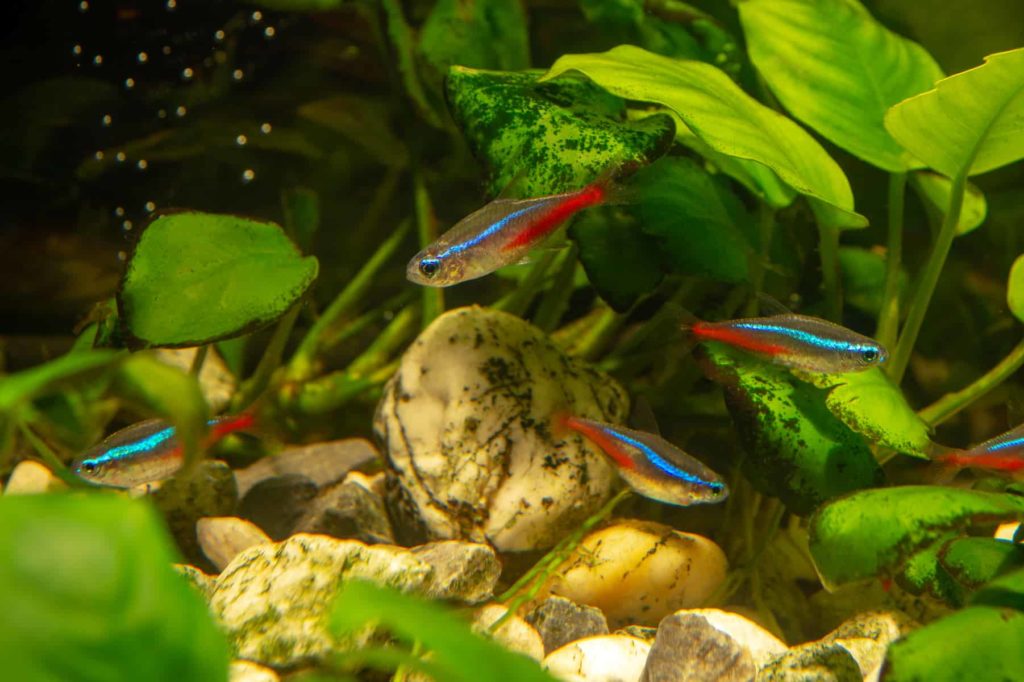 The black neon tetra is an egg subsurface scattering, laying sticky (adhesive) eggs on plants and other objects. A single female can lay hundreds of eggs. Because the parents will devour their own eggs and kids after spawning, it is customary to remove the parents. The black neon tetra, like much other fish, spawns early in the morning. Because of their small size, raising the fry might be more difficult.

Small invertebrates and plants make up the majority of their natural diet, which also includes crustacea, filamentous algae, and falling fruits. Black neons aren’t picky eaters and will eat practically anything you put in front of them; dry flakes or pellets are a good place to start. Brine shrimp, bloodworms, daphnia, mosquito larvae, and other protein-rich meals can be added to this. In captivity, the average Black Neon Tetra can live up to 5 years.