The blackchin guitarfish belongs to the Rhinobatidae family of cartilaginous fish. It is found in the Mediterranean Sea and the eastern Atlantic Ocean. It’s a bottom-dwelling fish that eats crabs, insects, and small fish. The Eastern Atlantic guitarfish is a big species of guitarfish. Blackchin guitarfish burrow under the ocean’s sandy bottom and were previously a common appearance in Southern European fish markets during the 18th century.

Crustaceans, various invertebrates, and fish are eaten by this bottom-dwelling fish. Females give birth to living children. Its lifestyle leaves it vulnerable to trawling and other fishing tactics, and its populations appear to be falling. It is also exposed to heavy overfishing, including its fins being marketed on the Asian market.

The blackchin guitarfish has a low reproductive rate, therefore older individuals congregate off the coast to deliver their young and mate on a seasonal basis. They are particularly vulnerable to fishing operations at this time. The fins of this species are extremely valuable, and they sell for a high price, although the fish are also eaten. They used to be abundant in the northern Mediterranean and in the Balearic Islands, together with the common guitarfish, but they no longer appear to be found in these places. 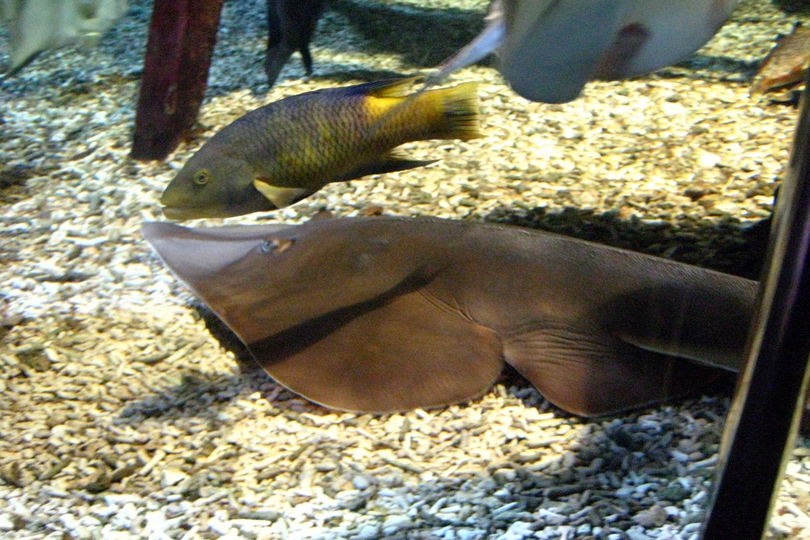 Captures off the coast of Africa have also decreased, but data on landings is scarce. The International Union for Conservation of Nature is concerned about the future of this fish, and it has been classified as critically endangered by the organization.

The blackchin guitarfish can be found in the Mediterranean Sea and the eastern Atlantic Ocean’s moderate temperate and tropical waters. Its northern and southern boundaries are the northern coasts of Portugal and Angola, respectively. Its Mediterranean Sea range is primarily centered in the southern and eastern regions. It can be found in depths of up to 100 meters on the continental shelf (330 ft).

Management measures have been implemented in Mauritania’s National Park to conserve this species. Between February and September, fishing is prohibited to avoid the mating season and thus the catch of pregnant females. Additionally, gear limits were implemented, and an increase in the population of Blackchin Guitarfish was recorded, showing that these efforts were successful.

The blackchin guitarfish has a black blotch on its nose that is more evident in juveniles than in adults, and is plain brown above and white below. It has a similar appearance to the sympatric common guitarfish. Smaller eyes, narrower rostral ridges, shorter front nasal lobe, and narrower back nasal flap are all characteristics of the blackchin. Short thorns can be seen on the inner edges of the eyes, on the shoulders, and along the spine and tail of both species, but the blackchins are less noticeable. Although larger fish have been reported from Guinea in West Africa and the Gulf of Gabès in the southern Mediterranean, this species grows to approximately 71 inches in length.

This fish is ovoviviparous, meaning the eggs are kept in the female’s uterus and the growing young are fed first by a yolk sac and then by uterine secretions. The gestation period is between five and eight months, and the litter size ranges from four to seven.

Blackchin guitarfish can grow to be a little over 2 meters long, with females being larger than males. Moves to inshore shallow waters for parturition. Because mating occurs quickly after the females give birth, pregnant females and reproductively active males come close to land. This means that a big number of people are congregating in one location at the same time, making them exposed to targeted fishing. Because Blackchin Guitarfish have reduced birthrates and slow growth, they are unable to rebound quickly from fishing pressure. 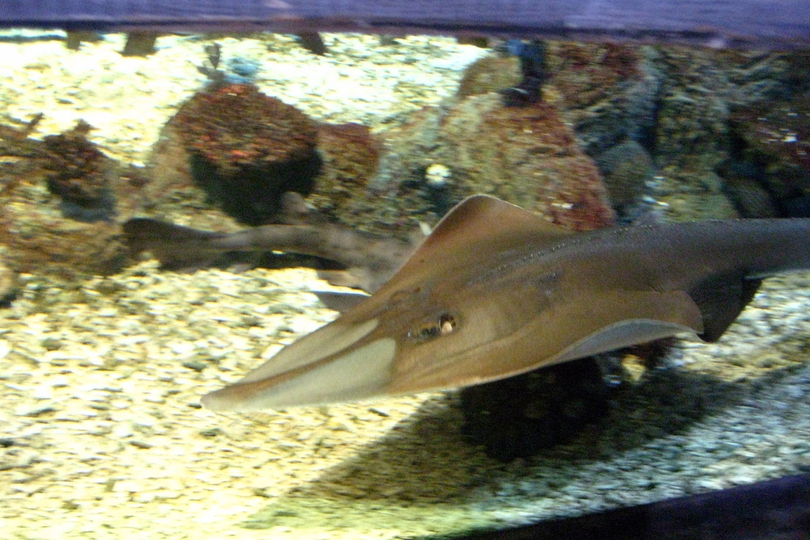 Foraging for shrimp, crabs, various crustaceans, squid, and mollusks, the blackchin guitarfish moves slowly over sandy and muddy areas of the bottom.