The Burmese Cat Breed is a copper-colored breed originating in Burma, believed to have its roots near the Thai-Burma border. The Burmese were developed in the United States and Britain, with most modern Burmese descended from Wong Mau, which was brought from Burma to America in 1930 and bred with American Siamese.

The early period of cat breed development showed that Wong Mau was a cross between the Siamese and Burmese breeds. This type was developed as a separate breed, known today as the Tonkinese. The Burmese cat has also been instrumental in the development of other breeds, such as the Bombay and the Burmilla. The two versions of the breed are kept separate.

Wong Mau, the cat he found in a monastery in Thailand fascinated Dr.Thompson. Wong Mau resembled the cats that Dr. Thompson had seen while living in Tibet where he had served as a U.S. Navy doctor for some years and developed a strong interest in Southeast Asia. He spent time in a monastery in Tibet and was enchanted by the cat breed he saw in that region. These cat breeds were known for their brown rich colour. 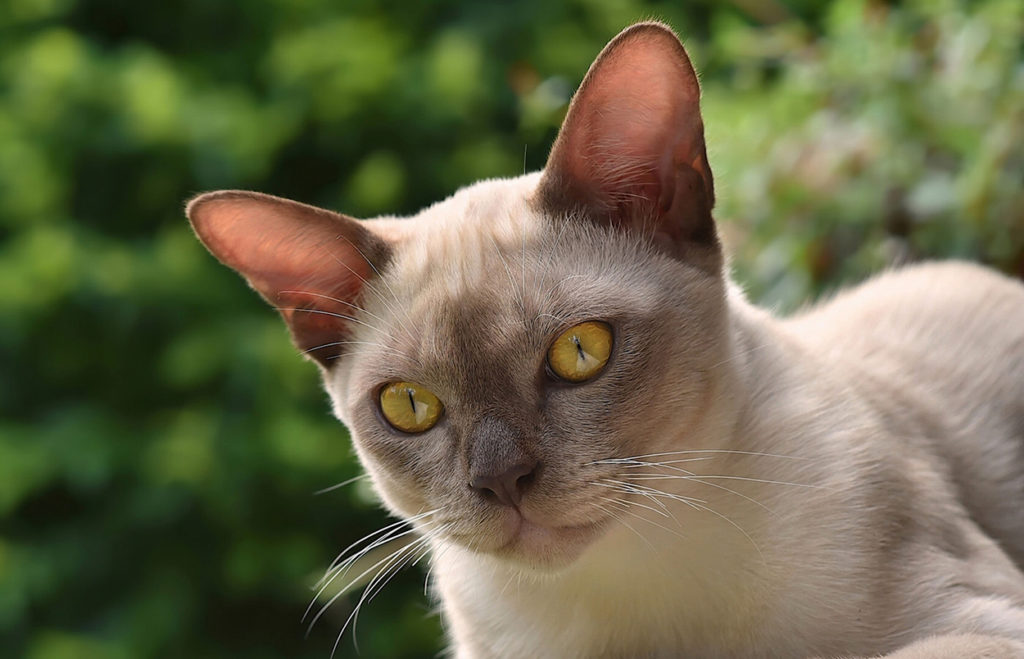 Wong Mau was mated with a male seal point Siamese. The kittens had three different colors and patterns: beige, sable brown, and pointed. Dr. Thompson discovered that Wong Mau herself was a Siamese hybrid—half Siamese and half Burmese.

Since the pointed pattern is a recessive trait and Wong Mau herself must have possessed the gene for the pointed pattern, it was discovered that the Burmese gene responsible for sable color is a member of the albino series of genes alleles.

The Burmese gene that causes sable color is a member of the albino series of gene alleles. This gene reduces pigment in the hair, causing solid black to appear dark sable brown. Burmese cats were an immediate hit when they were introduced into North America in the late 1930s and early 1940s. These cat breeds were welcomed with open arms and gained popularity very quickly.

The Burmese are one of the most popular cat breeds. The original version of the Burmese is known for its dark brown coat, but this has now been developed into a whole range of colours. There are two versions of the Burmese cat, with different standards and coat characteristics.

The Burmese are small to medium-sized cats, with a short hair length of 4–6 kg (9–13 lb). It has a muscular build and a broad chest. The head is broad and round with large ears that are set well apart. It has an even, wedge-shaped face with a firm chin and rounded whisker pads. Its eyes are expressive.

The two types of cats are similar in many ways, but they do have some important differences. The British or traditional type is more slender, with a longer body and legs. The head is wedge-shaped, with large pointed ears and a long tapering muzzle. 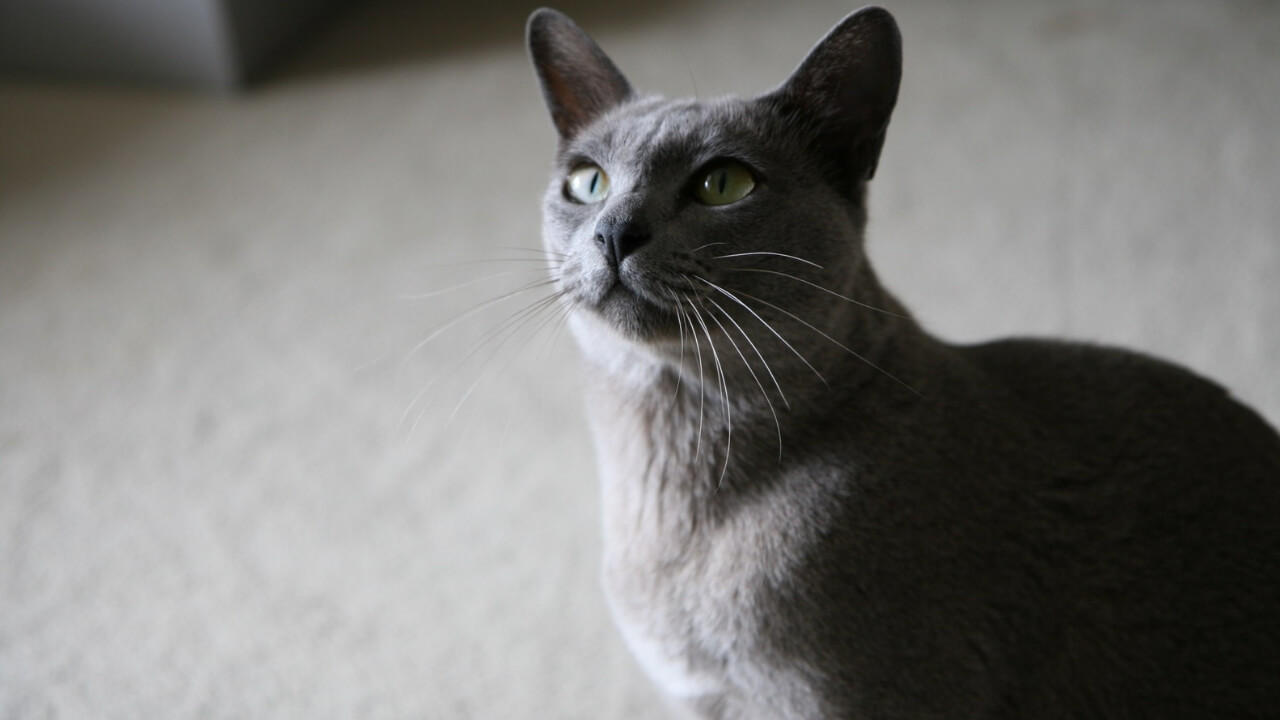 The American Burmese is a stockier cat with a much broader head, round eyes, and distinctively shorter, flattened muzzle. The ears are wider at the base and legs and tail should be proportionate to the body. .this group has a rounded paw.

The coat is short, fine, and glossy. The color is also solid, with a satin-like finish. Only gradually should the coat shade to lighter underparts. Faint colorpoint markings may be visible, but any barring or spotting is considered a serious fault. The eyes are green or gold depending on the coat color.

The breed’s original color standard is dark brown. This color is the result of the Burmese gene, which causes a reduction in the amount of pigment produced, converting black into brown and rendering other colors paler than usual.

In the breed, people-oriented cats remain playful throughout their adult lives. This breed is also known for its puppy-like characteristics, bonding with its owners, and enjoying human company.

Burmese cats are vocal and often remind owners of their Siamese ancestry. They have a softer, sweeter voice and are not as independent as other breeds. Burmese cats may not be suited for homes that leave their pets alone for long periods of time. 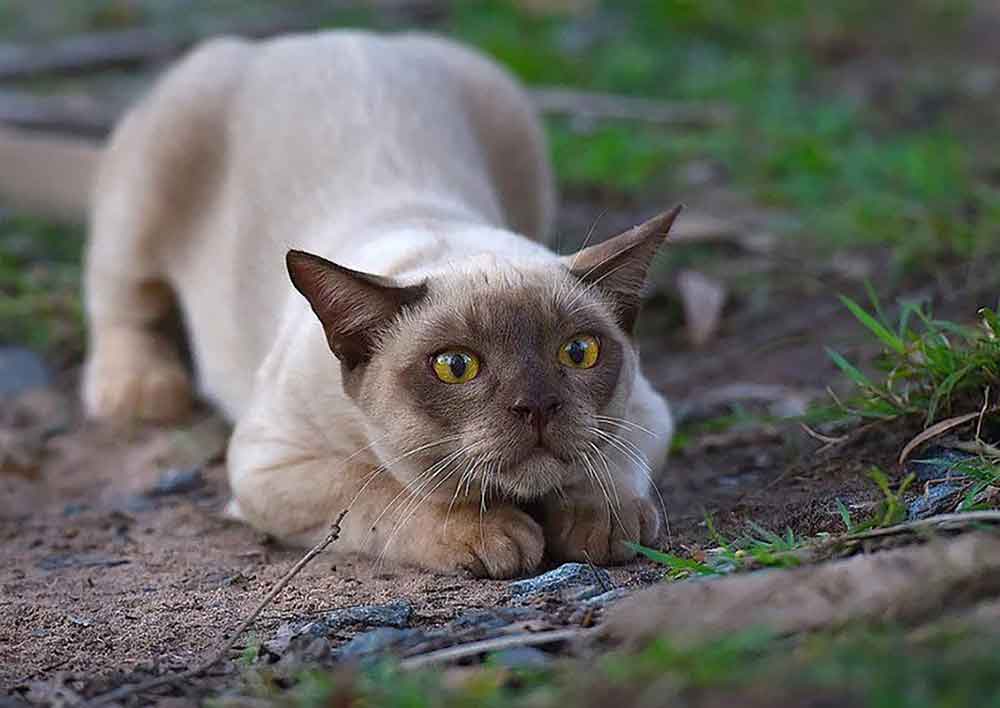 In Europe and Australia, Burmese cats are at a higher risk of developing diabetes mellitus than other breeds. American Burmese do not share this increased risk due to their genetic difference from the British Burmese. Hypokalemia has also been seen in the British Burmese.