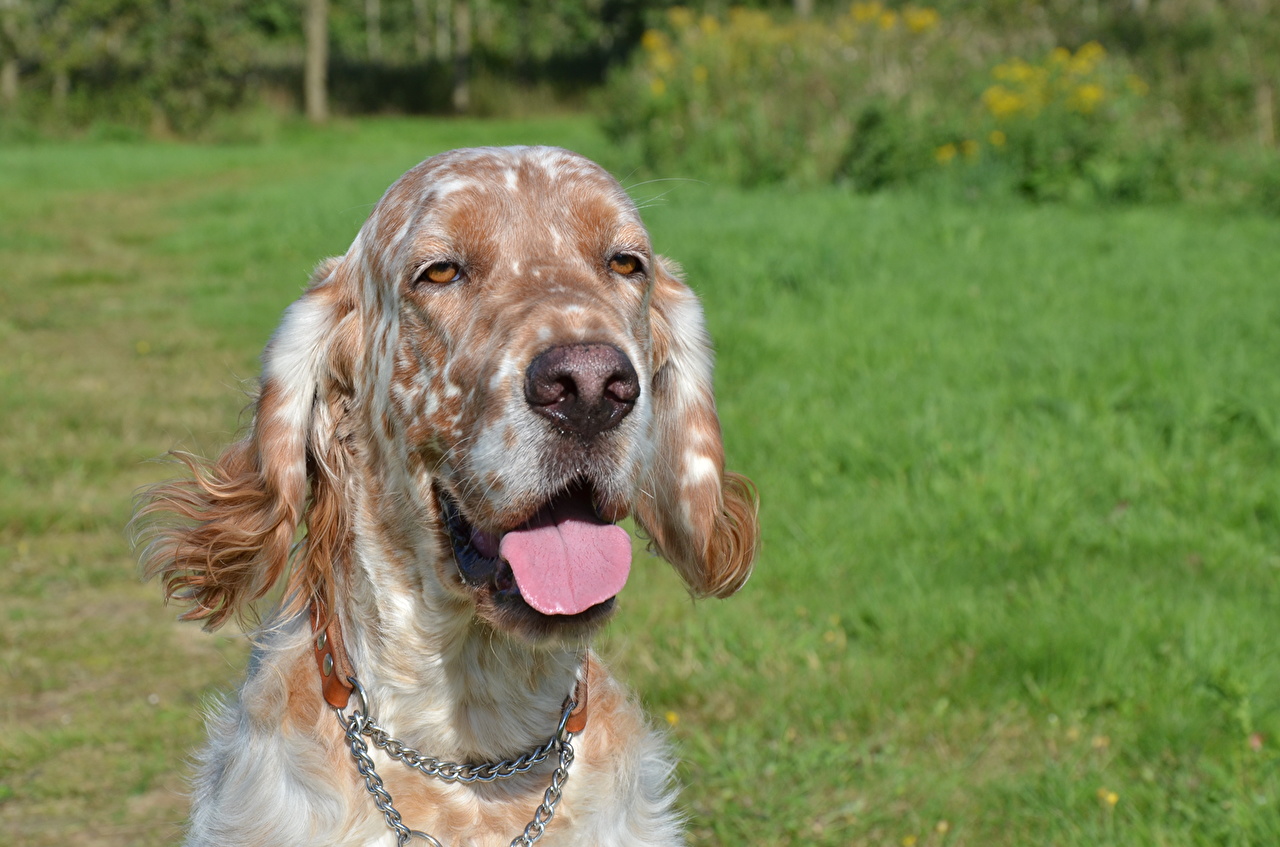 The English Setter’s ancestors probably included the Spanish Pointer, Springer Spaniel, and Large Water Spaniel. In the 18th century, Setters were developed to hunt game on the moors and then freeze until it was killed. It is sometimes referred to as the Laverack or Llewellin Setter as these were famous strains of the breed during the major development period in the 19th century.

The English Setter is a breed that was originally bred in the United Kingdom. It was first exported to America in the 19th century, and C.N. Myers of Blue Bar Kennels in Pennsylvania played a major role in the English Setter’s development his state.

The English Setter was developed by Edward Laverack, beginning in 1825 and continuing for over 35 years. He bred the dogs that he had acquired, specifically those with red coats and black noses, which were known as “Setters”. These dogs formed the basis of all English Setters today.

In the 18th century, guns replaced nets as the tool used to hunt game. Selective breeding of Setters resulted in a more upright stance so that they could see game from afar. As time went on, different types of Setters began to emerge due to their environment and terrain.

The English Setter is a breed of dog that originated in England, where it was used for hunting. The dog is characterized by its red coat and white markings. It has been bred to hunt game such as quail, pheasant and grouse. When working, the dog will hunt methodically seeking the airborne scent of its prey. The Setter got its name from the action of the dog when it sets on the prey.

The English Setter is a medium-sized dog with an elegant appearance. It should be 24 inches (61 cm) for females and 27 inches (69 cm) for males. The head should have a slightly domed top with a muzzle of good depth, and the eyes should be dark in colour with a kind, gentle expression. 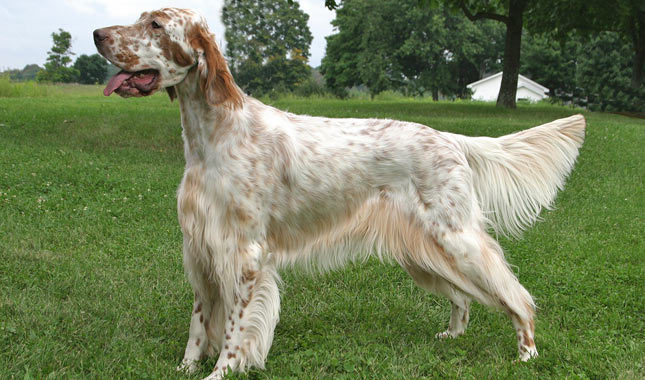 The English Setter is elegant, solid, and well-balanced. A belton (speckled) coat should cover the body of a show dog. The coat color should be a combination of liver, lemon, and orange among others.

The top of the ears of the English Setter should be positioned in line with its eyes and lie in an elegant fold. The dog has a long muscular neck, well-angled shoulders, and a brisket that is deep enough. It has strong, powerful hindquarters as well as a body that is moderate in length relative to its height. Its tail is carried in line with the back.

The English Setter is a lively dog that loves to hunt and run. It has been known as a great hunting dog for over one hundred years. The breed’s love of running and hunting comes from its field lines. If not given enough exercise, they can be overly active inside the home, but with daily exertion, they are calm and tractable housedog. 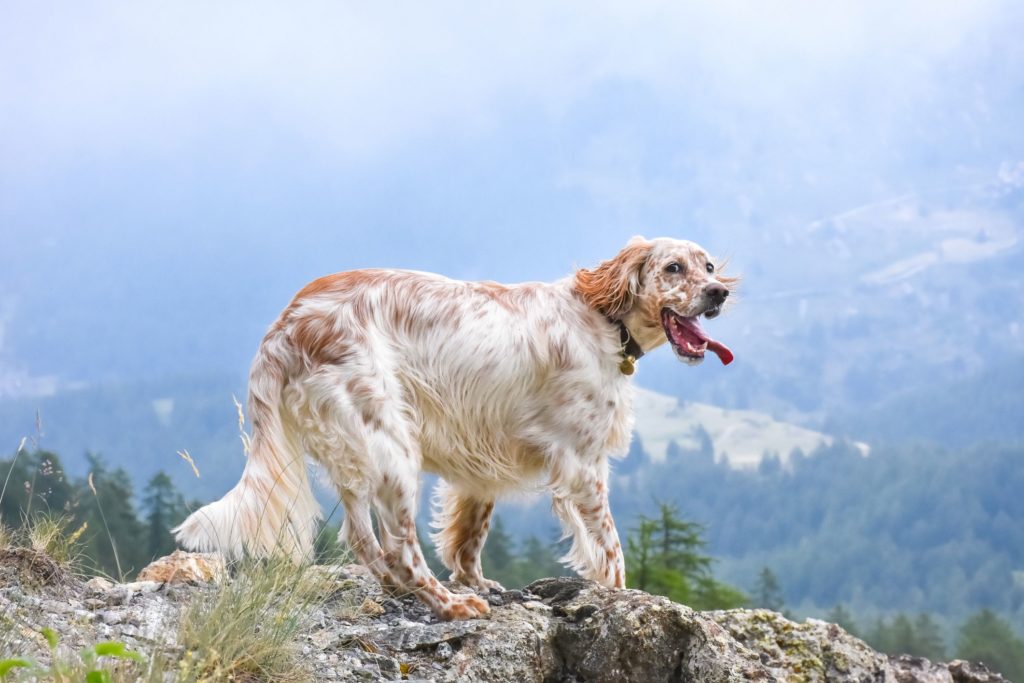 The English Setter needs a lot of exercise daily, requiring at least an hour of strenuous activity. The long coat should be brushed at least every two or three days to keep it clean and healthy. The white coat may have some areas that are hard to keep bright. Clipping and trimming should be done every month or so for the best appearance. 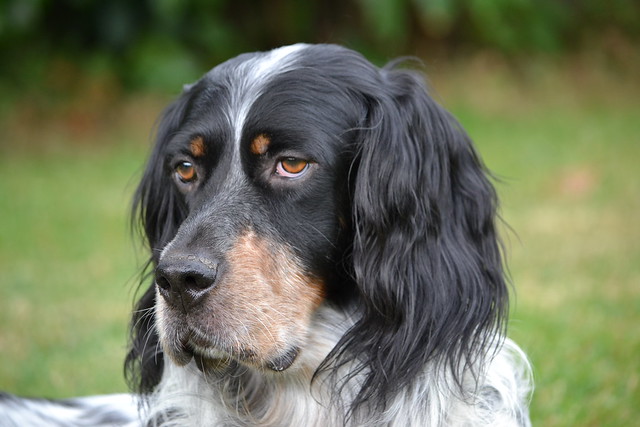 Generally, English setters are reasonably healthy. They have an average life span of 11 to 12 years. The English setter can be affected by genetic problems. Some that are known to sometimes occur in this breed include congenital deafness, progressive retinal atrophy (PRA), hip dysplasia and subaortic stenosis.