Betty-Ann Yaxley created the Foldex in 1993 and displayed it in a Show Hall in the province of Quebec, Canada. The Exotic Fold, often known as the Foldex cat, is a rare breed of cat. It was created by crossing a Scottish Fold with an Exotic Shorthair to generate a cat with a modest fold in its ears. Jeanne Barrette was such a devotee of the Foldex that she decided to become a breeder and devote her life to the Foldex breed. Foldex was designated as an Experimental breed by the Canadian Cat Association in November 1998, thanks to her efforts. In August of 2006, it was finally recognized as a New Breed.

The Foldex was granted full Championship breed status after a lot of hard effort on the part of breeders. However, because the Canadian Cat Association is the only organization that recognizes this breed, it is primarily bred in Canada, however, some of these cats can also be found in Europe and the United States.

The Foldex are little cats with rounded faces and short legs. Their eyes are rounded and fully open, and they have a pair of short, smooth-edged ears. The Foldex are noted for their unique round-tipped folded small ears. However, only half of them have the Folded gene, which causes them to have folded ears. Straights are cats with non-folded ears, and their ears will develop straight in adulthood, like other cat breeds. When folded kittens are 21 to 28 days old, the folds in their ears become noticeable.

The Foldex has a medium-sized body with strong muscles, short legs, and a short neck. Their coats range in length from long to short, are inherently dense and silky, and come in a variety of colors and patterns. Foldex cats have a round face, wide-open eyes, and a pronounced nose break between their eyes. The height ranges from 8 to 12 inches, while the weight ranges from 6 to 14 pounds.

They have an affectionate demeanor that isn’t overbearing, making them an excellent friend. They are devoted to their owners and enjoy being petted and cuddled. This adorable breed is known for being excellent lap cats. They will be satisfied if you provide them with physical affection on a regular basis. Foldexes have a strong desire to explore their surroundings. They are far from bashful, as evidenced by their willingness to contact strangers without reluctance. 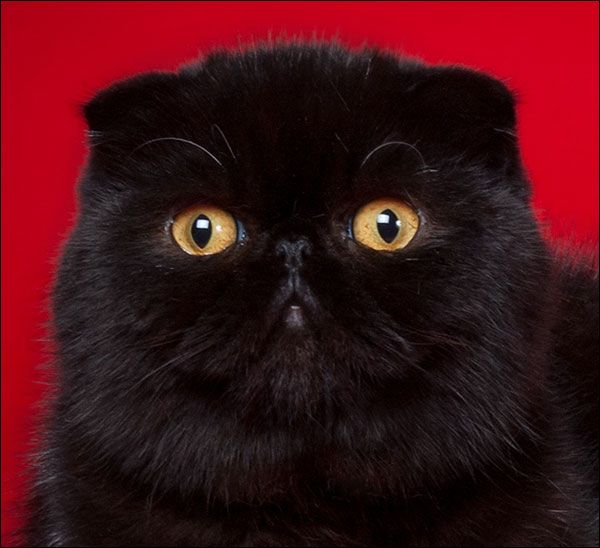 They are a family-friendly breed because of their easygoing demeanor, which allows them to get along well with children and other pets. Foldexes are a good choice for cat owners who live in apartments because they are a quiet breed. Foldexes are bright species that like playing with toys. They have a nice personality and a peaceful demeanor.

The foldex cats are arranged but independent, and a little amount of outdoor area would be excellent for them to explore as well as spend time playing a variety of games to keep boredom at bay. Allow this breed plenty of room to explore the house, which will offer them daily exercise. It would be nice if they had access to some outdoor areas as well. Foldex breeders require a lot of mental activity to maintain their minds and bodies in shape. Cat puzzles and toys are excellent methods to stimulate them cognitively. Long-haired Foldex cats require more frequent grooming because their coats are prone to matting and hairballs and can easily become tangled.

Despite the fact that they are a generally healthy breed, their genes put them at risk for cat polycystic kidney disease. At a later stage, they may develop cysts on their kidneys. The average lifespan is between 12 and 15 years.