The Kurilian Bobtail is a cat breed that originated in the Russian Kuril Islands, and also Sakhalin Island and Russia’s Kamchatka peninsula. The Kuril Islands Bobtail, Kuril Bobtail, and Curilsk Bobtail are all names for the breed, which can also be referred to without the word “bobtail.” Kurilean is another spelling of the word.

The original short-haired variation is a natural breed that has been around for more than 200 years on the islands. Since the middle of the twentieth century, they have been popular as selectively bred pets in Russia and, to a lesser extent, other regions of Europe, particularly for their rodent-hunting ability, although they have remained rare in North America as of 2011. Outside of its native lands, nothing is known about this new breed. When Russian military officers and scientists brought the cats home, they became well-known outside the islands. Kurilian Bobtails piqued the interest of Russian cat aficionados, who began breeding them. These cats are more well-known in Europe than in North America, where there are only approximately 100 of them. Since 2002, the cats have competed in shows all over the world. The American Cat Fanciers Association, the Canadian Cat Association, the Cat Fanciers Federation, and the International Cat Association all recognize the Kurilian Bobtail in North America.

The Kurilian Bobtail is a medium to the large-sized cat with a robust physique and significant boning. The Kurilian Bobtail is a natural breed, which means it evolved naturally without the interference of humans. It’s available in a variety of solid and tabby colors, with or without white markings. The back of the animal is slightly arched, and the hind legs are longer than the front legs. 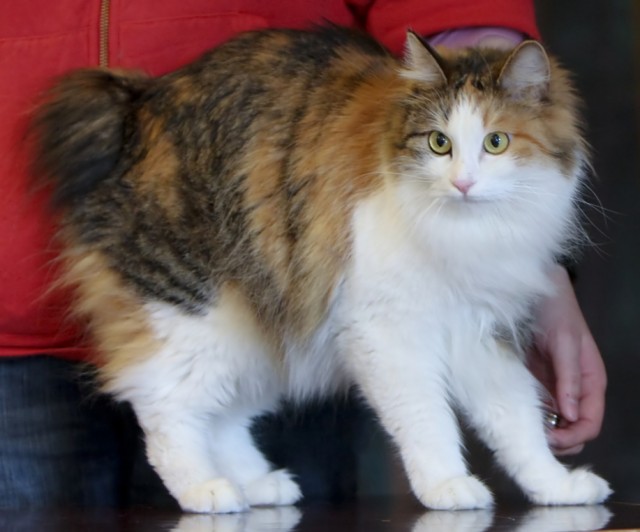 It has a rounded-rectangular, wide face and a medium to large, solid, muscular frame. The hue of the eyes matches the color of the coat. Yellow, green, and yellow-green are the most popular colors. Kurilians come in semi-longhair and shorthair varieties. Colors with no color points and solids are permitted. The fact that a litter only has two or three kittens contributes to its rarity. Red, grey, and bobtail stripes are the most prevalent coat colors. Males weigh 11-15 pounds, while females weigh 8-11 pounds.

This cat is intelligent, curious, and independent, but don’t assume he won’t want to spend time with you. The Kurilian is a gregarious creature who enjoys playing. His imposing stature belies his mild demeanor. He is usually a people person and could be an excellent fit for households with children and other pets, such as dogs. However, because the Kurilian is known for his hunting abilities, ferrets, hamsters, rabbits, and potentially even birds and fish in an aquarium may be at risk if one is present. Be warned that if he is left outside, he may hunt and kill songbirds. The Kurilian Bobtail is likely to prefer sitting in your lap or sleeping in your bed. Short and long coats are available for the Kurilian Bobtail. The soft, silky hair falls flat and has a considerable undercoat in both coat types. The tailcoat of the shorthaired variant is the same length as the body hair. Kurilians with semi-long hair have a plumed tail. The Kurilian Bobtail’s silky coat avoids matting and is easy to maintain; loose hair can be brushed out regularly with a soft slicker brush. Bathing the coat every now and again will keep it clean and soft. Shedding is light to moderate; brush more frequently to minimize shedding.