In the 1800s, a dog known as the Old English Sheepdog was first called the “Shepherd’s Dog.” In 1873, it was exhibited for the first time at a show in Birmingham, England. At that point, there were only three entries and judges felt that the quality of these dogs was so poor that they offered only second place.

The Old English Sheepdog is a pastoral dog descended from English-type dogs. A small drop-eared dog seen in a 1771 painting by Gainsborough is believed by some to represent the early type of the Old English Sheepdog. In the early 19th century, a bobtailed drovers dog called the Smithfield or Cotswold Cor was noticed in southwestern.

Bearded Collies are said to have originated in Scotland. The Bearded Collie is said to be one of the breeds used to create the variety seen today. Some fanciers believe that Russian Owtchars were among the ancestors of today’s Bearded Collie.

Although the appearance of dogs has changed little over the years, elaborate grooming was not uncommon in the breed. Combing and powdering fur dates back to 1907, when it was recorded that owners would backcomb and powder the Old English Sheepdog. The dog became popular in America in the 1880s and by 1900 five out of ten wealthiest American families were breeding and showing these. The breed is still in existence as a show dog today.

The Old English Sheepdog, also known as the Bobtail, is a large breed of the dog immediately recognizable by its long coat and bobbed tail. It has fur covering its face and eyes, and its ears lie flat to the head. The breed’s tail was commonly docked resulting in a panda bear–like rear end, but tailed Old English sheepdogs are now common. The Old English Sheepdog has a long, thick coat called “feathering” that hangs down.

It has a shorter torso and longer hind legs than the Newfie. The Old English Sheepdog walks with a “bear-like roll from the rear”. Height at the withers is at least 61 cm, with females slightly smaller than males. The body is short and compact, and the ideal weight may be as much as 46 kg for large males. 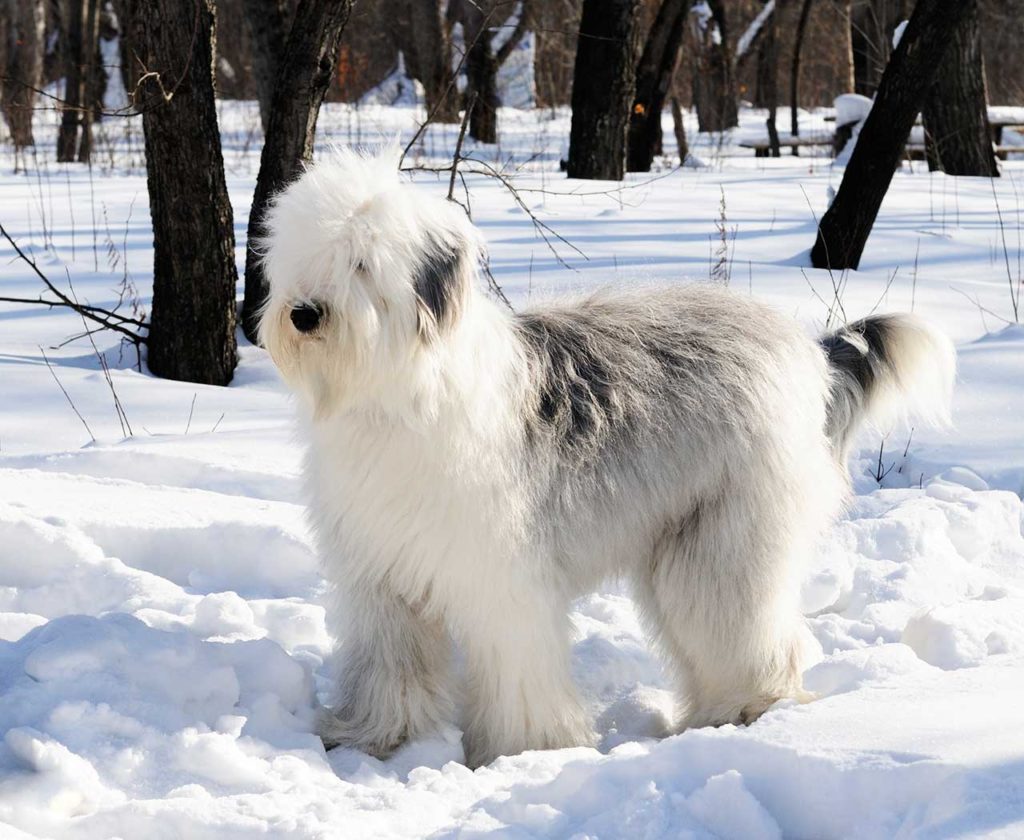 The breed standards describe the ideal Old English Sheepdog as being intelligent, social, and adaptable. The American Kennel Club adds that these dogs have “a clownish energy” and are sometimes couch potatoes.

They should be trained, and they need to socialize with other dogs. These dogs are not suited for first-time dog owners because they require a firm hand. Old English sheepdogs were created as serious working dogs, so they need tasks to keep them occupied, such as obedience competitions or herding a flock. 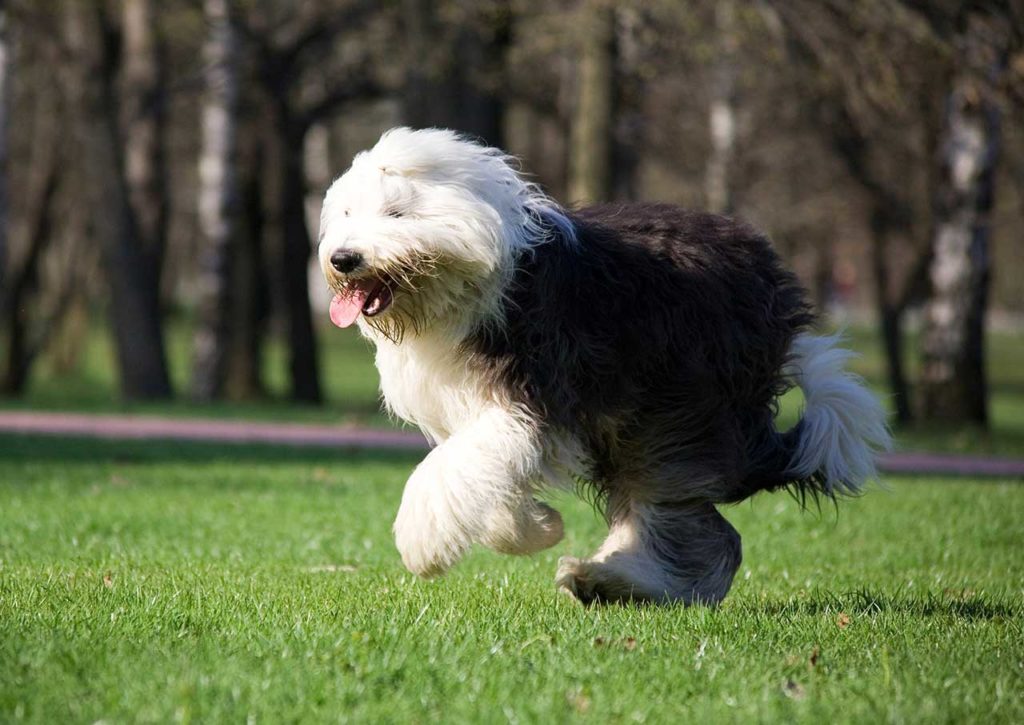 Old English Sheepdogs don’t need a lot of exercises, but they do need plenty of opportunities to release their energy and play. Otherwise, they will become rambunctious and bored which is usually expressed by barking and destructive chewing. If the sheepdog is left without companionship, he will become unhappy and destructive. He gets along with most strangers but is not a guard dog.

Sheepdogs have a lot of coat care needs. You must brush and comb the long coat frequently to remove all the dirt, which takes quite a while. You must also use scissors to cut hair from your dog’s eyes so he can see, and trim his genital areas for proper hygiene. 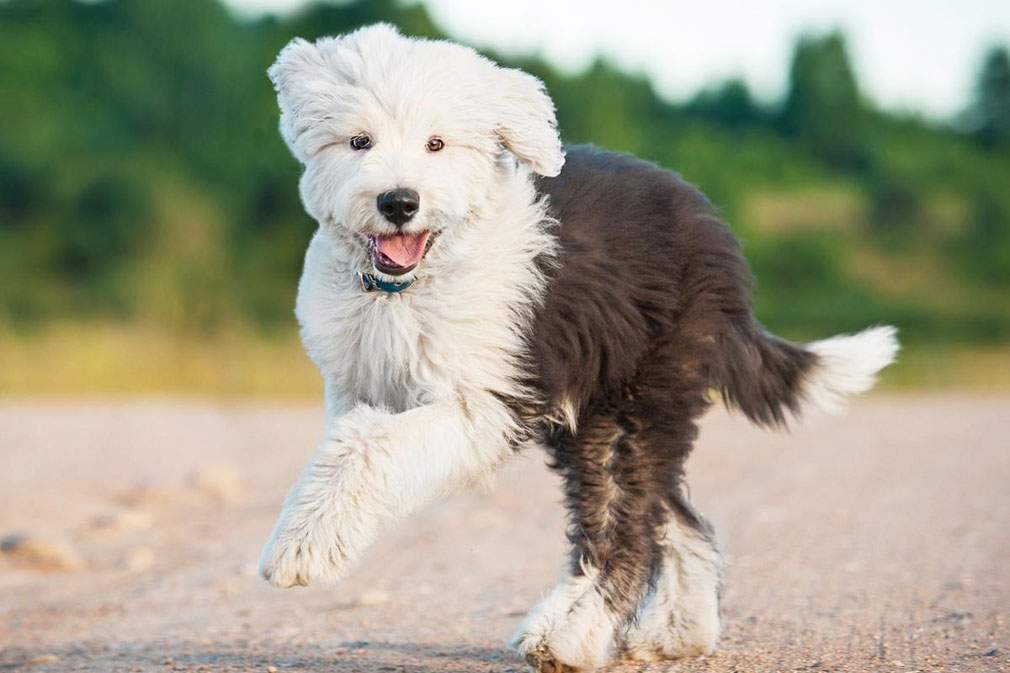 Some diseases in Old English Sheepdogs include hip dysplasia, cataracts, glaucoma, entropion, thyroid problems, deafness, diabetes, HD, and allergies. Heatstroke is also a serious concern in this breed and the major cause of death of this breed is cancer. They live an average of 12 to 14 years.