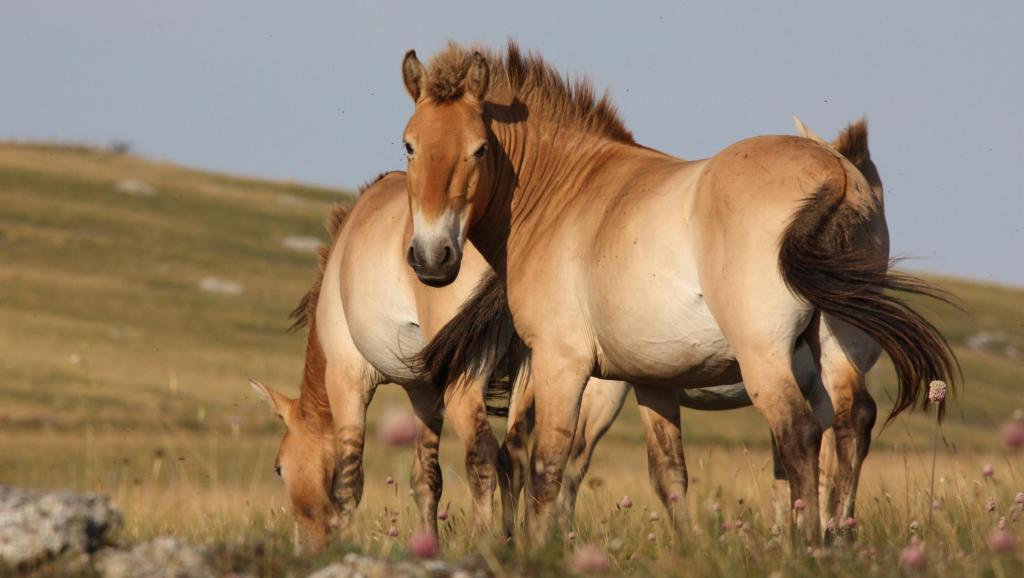 The Przewalski Horse Breed – The horse of Przewalski; The Mongolian wild horse, also known as the Dzungarian horse, is a nearly extinct horse that originated in Central Asia’s steppes. It is named after Nikoaj Przewalski, a Russian geographer, and adventurer. It has been returned to its original habitat in Mongolia’s Khustain Nuruu National Park, Takhin Tal Nature Reserve, and Khomiin Tal, as well as other locations in Central Asia and Eastern Europe, since the 1990s.

Although Przewalski’s-type wild horses appear in European cave art dating back as far as 20,000 years, genetic analysis of a 35,870-year-old specimen from one of these caves revealed affinities with the extinct Iberian horse lineage and the modern domestic horse, indicating that the horse depicted in this art was not Przewalski’s horse. The oldest specimens of Przewalski’s horses have been discovered at Chalcolithic Botai culture archaeological sites.

Around AD 900, the Buddhist monk Bodowa described what is considered to be Przewalski’s horse, while an account from 1226 describes a wild horse event during Genghis Khan’s battle against the Tangut Empire. A horse of this kind was seen in Russia’s Tomsk Oblast by John Bell, a Scottish doctor in Peter the Great’s service from 1719 to 1722, and a huge hunt with thousands of beaters ordered by the Manchurian emperor killed between two and three hundred of these horses a few decades later in 1750. 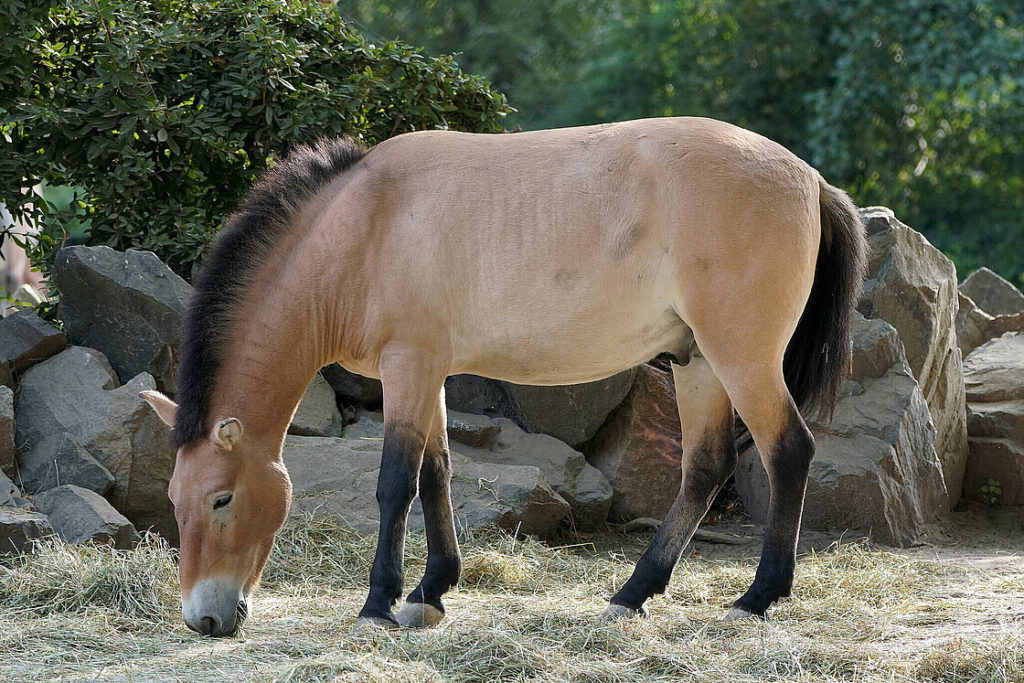 Nikolai Przhevalsky (1839–1888), a Russian colonel of Polish heritage, is the species’ name. He was an adventurer and naturalist who received the skull and hide of an animal shot in the Gobi in 1878 at what is now the China-Mongolia border, and he planned to see it in the wild in the Dzungarian Basin.

Several genetic features of Przewalski’s horse differ from those of modern domestic horses, implying that neither is an ancestor of the other. The Przewalski, for example, has 33 chromosomal pairs vs 32 in the domestic horse. Long before the domestication of the horse, their ancestral lineages diverged from a common ancestor between 38,000 and 160,000 years ago.

Przewalski’s horses are stockier, smaller, and shorter than their domesticated counterparts. The typical height is 48–56 inches or 122–142 centimeters, and the average weight is 300 kilograms (660 lb). The coat is dun in color with pangaré features, ranging from dark brown around the mane to pale brown on the flanks and yellowish-white on the belly and muzzle. Przewalski’s horse’s legs are frequently stripped, which is typical of primitive markings. 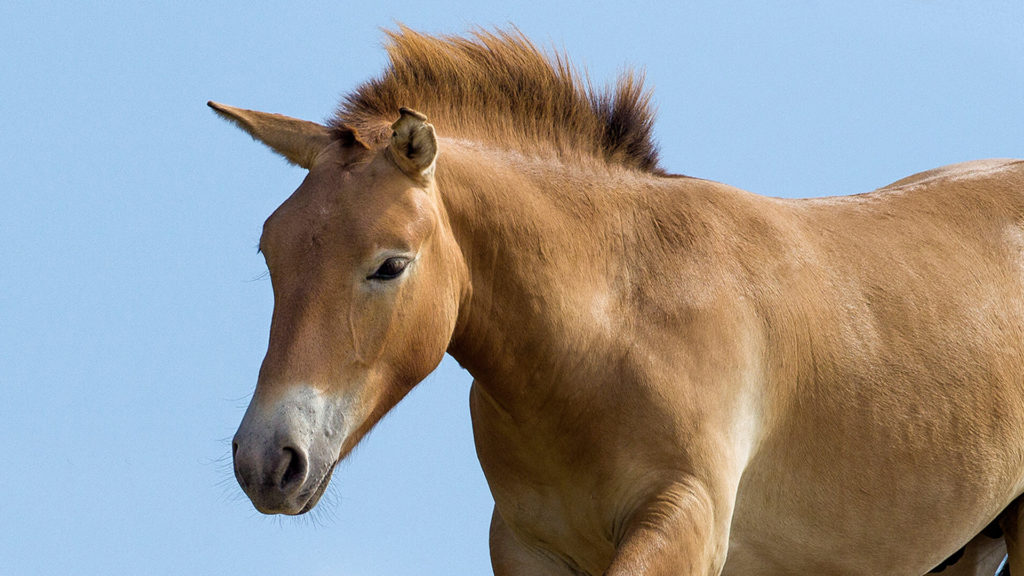 The mane is upright and does not extend as far forward as in domesticated horses, while the tail is around 90 cm (35.43 in) long with a larger dock and shorter hair than in domesticated horses. Przewalski’s horse’s feet are longer in the front and have thicker sole horns than wild horses, an adaptation that increases hoof function on uneven terrain.

Przewalski horses, consisting of an old stallion, his mares, and foals, create an army of five to fifteen individuals. Family groupings with one adult stallion, one to three mares, and their common progeny establish in modern reintroduced populations, and they stay in the family group until they are no longer dependent. Bachelor stallions and aged stallions that have lost their harems form bachelor groups, while young females join other harems. Families can band together to form a herd that travels together. 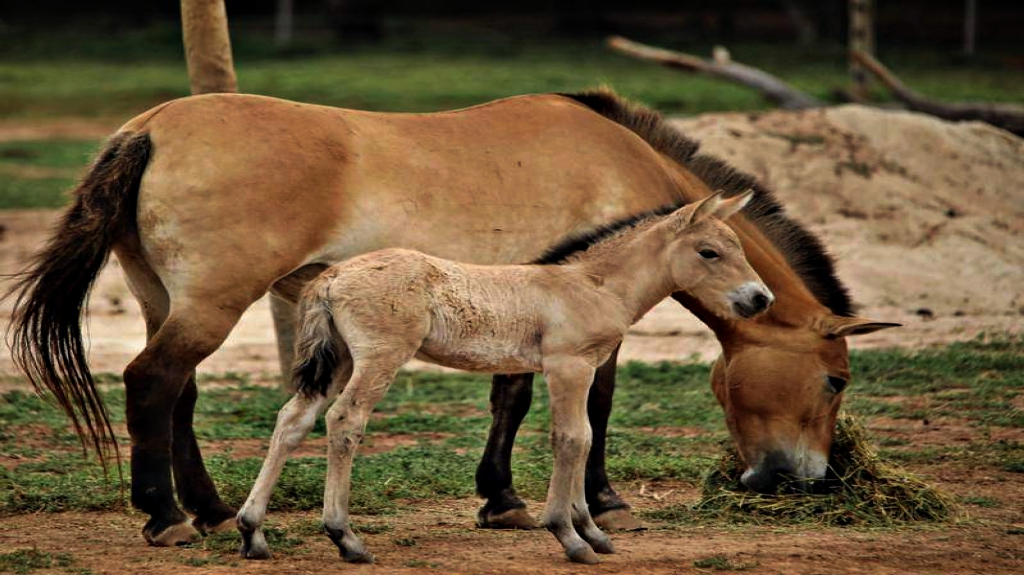 Their daily routines show horse behavior that is comparable to that of feral horse herds. Stallions herd, drive, and defend their entire family, while mares are frequently seen as the family’s leader. For years, stallions and mares stuck with their favored spouses. While mares have a high level of behavioral synchronization, stallions other than the main harem stallion are often less stable.

The ancient inhabitants were claimed to have preferred “particularly saline places” and resided in the “wildest parts of the desert.” During the spring and summer, they were seen near-natural wells, traveling to them by crossing valleys rather than higher slopes.

The majority of the Przewalski horse’s diet consists of plants. Elymus repens, Carex, Fabaceae, and Asteraceae are among the plant species found in a typical Przewalski’s horse environment. E. repens, Trifolium pratense, Vicia cracca, Dactylis glomerata, and Bromus inermis are the most common plants eaten by Przewalski’s horses. At different seasons of the year, they prefer different species.

Mating occurs in late spring or early summer. Mating stallions do not start looking for mating partners until the age of ﬁve. Stallions assemble groups of mares or challenge the leader of another group for dominance. Females can bear children at the age of three and have an 11–12 month gestation period.