The Saluki is one of the oldest domestic dog breeds. The Saluki has been discovered in Egyptian tombs dating back thousands of years. The name Saluki is thought to have originated in the ancient culture of Seleucia. The Persian Greyhound, also known as the Saluki, is a standardized breed derived from sighthound dogs, who hunt primarily by sight rather than scent, and was traditionally utilized by nomadic tribes to track down game animals. The dog was developed in the Fertile Crescent.

The Saluki is most closely linked to the Afghan hound, a base breed that predates the creation of modern breeds in the nineteenth century, and has been purebred both in the Middle East, especially by royalty, and in the West since at least that era.

The dog forebears were bred in the area where agriculture began. Despite images sporting erect, pointed ears, sprinting dogs with long, slender bodies adorn ceramics unearthed in Susa, southwest Iran, dating back to 6,000 years ago. Wall sculptures from the Sumerian empire (now Iraq) dating from 6,000 to 7,000 BC depict dogs that resemble this breed. 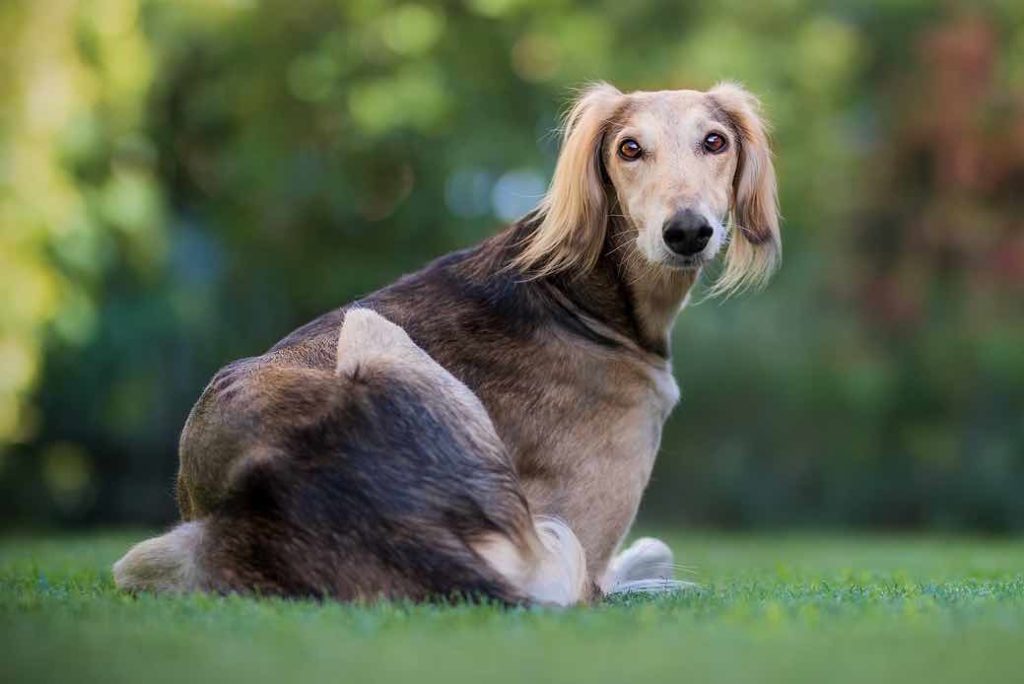 The skeletal remains of an ancient dog identified as a greyhound in Saluki form were discovered at Tell Brak in modern-day Syria and dated to around 4,000 years ago. Saluki-like dogs, on the other hand, rose to popularity during Egypt’s Eighteenth dynasty, displacing hunting dogs known as tesem in ancient Egyptian art. The variety reached as far south as Sudan.

According to mythology, the returning crusaders brought Saluki-type canines from the Middle East to Europe. In 1514, a portrait of Henry IV with his hunting hound depicts a dog that some believe to be an ancestor Saluki. During the 1930s, the King of Bahrain was known for his pack of this breed that followed him on hunting trips around the Arab world. His son sought to keep the lines pure-bred after his death, but they were interbred with other breeds.

The royal kennel’s pure-bred lines were saved, however, thanks to the efforts of Dana Al Khalifa, who was given two pure-bred puppies by the King and had pure-bred Salukis registered with the Kennel Club of Bahrain about a decade later.

Salukis were brought to England for the first time in 1840. They were referred to as “slughi shami” and were once thought to be the same breed as the current Sloughi; however, subsequent genetic tests have revealed that the two breeds are genetically distinct. In 1895, the first successful modern Saluki breeding line was established. She acquired a breeding pair from the Al Salihah area of Lower Egypt after seeing this on a Nile tour that year.

She toiled alone for over three decades as a champion of breed integrity, and the Saluki’s true popularity in Europe did not emerge until the early 1920s when officers returning from World War I and the Arab Revolution took their pet Salukis along with them.

The Saluki has a graceful and symmetrical appearance. Male and female Salukis are similar in size. With wide eyes and drop ears, the head is long and narrow. The breed’s tail is long and curled. Sighthounds are known for their deep-chested, long-legged bodies. Salukis are sighthounds who track down and kill or recover their prey. The modern breed’s usual height range is 23–28 inches tall at the withers and 16–32 kg in weight. 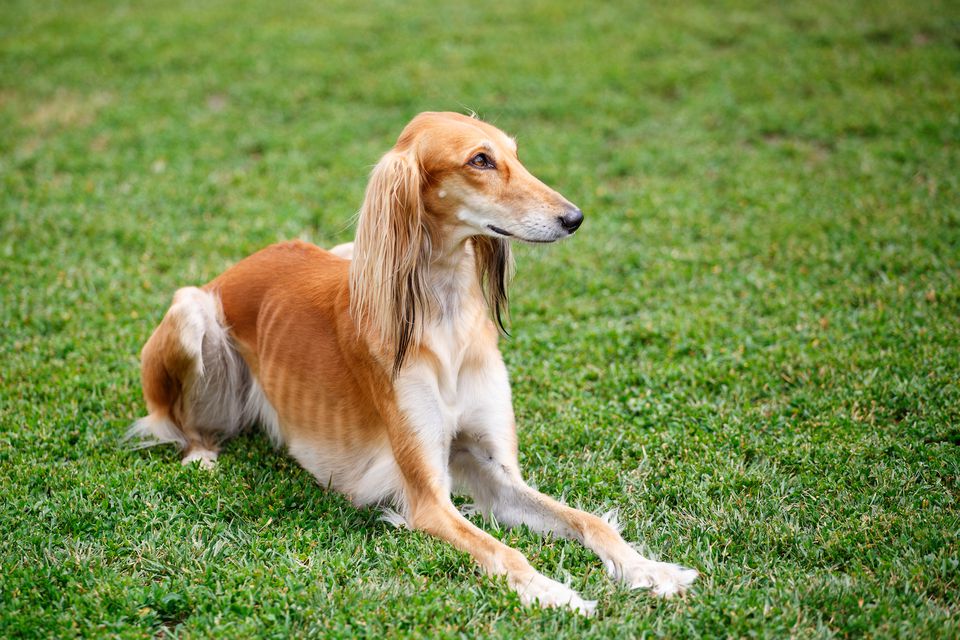 White, cream, fawn, red, grizzle/tan, black/tan, and tri-color are some of the colors available which are white, black, and tan. The breed’s genetic material has two coat types: smooth and feathered. Light fluffing appears on the backs of the legs, thighs, ears, and even the throat in the latter form. When compared to other breeds, both types of fur are silky and low-shedding. The majority of this breed in the Middle East have short hair.

When it comes to strangers, the Saluki is reticent and haughty. They are frequently committed to their own relatives, but not overly outgoing. They are frequently gentle with youngsters, yet they may not be playful enough to satisfy the majority of them. The dog is a sensitive breed that does not enjoy rough and tumble play. They can be shy as well. Inside, they’re usually extremely calm and docile, looking for a cozy warm location. 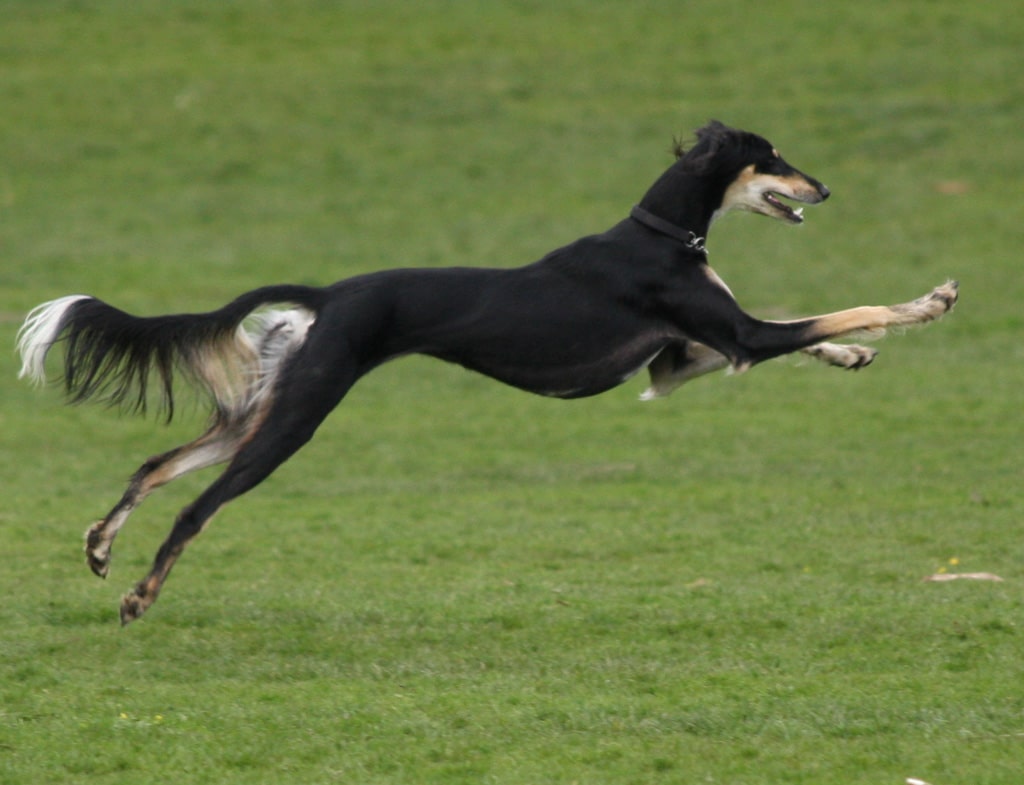 Outside, they have the ability to sprint in large circles at high speeds, and they may attempt to chase small animals or fast-moving things. They prefer soft toys to hard games and activities like retrieving balls. Early socialization will aid in the prevention of later-life timidity and shyness.

Daily exercise, preferably in the way of free running in a safe and enclosed area, is crucial. Long leash walking or running can also meet their needs. A healthy Saluki is naturally slim, but many are fussy feeders, resulting in a dog that seems to be exceedingly skinny. Their silky coat just requires occasional brushing to eliminate dead hair, but the longer feathering should be combed once or twice a week to avoid matting. The feathered breed has a long coat that covers its whole body.

The most prevalent health issues are liver cancer and lymphoma. This breed has been linked to cardiomyopathy. Salukis have a lifespan of 12 to 14 years on average.