Ticks are small arachnids that require blood meals to complete their life cycle. They have eight legs and can be scientifically classified as Aracnida . The fossil record suggests that it has been around for over 90 million years, with 800 species in existence today. Only two families of this, Ixodidae and Argasidae , are known to transmit diseases.

Female adult ticks are the most common ones found to bite people. Males generally die after mating, so they do not commonly cause bites. they don’t jump, fly or fall on hosts. They crawl out and grab onto a host with their legs and attach themselves to it for a blood meal. Although some larvae may have preferred hosts.

They are organisms that can transmit disease to many hosts. Some cause economic harm, such as Texas fever in cattle that can kill up to 90% of yearling cows. They act as vectors when microbes in their saliva and mouth secretions get into the host’s skin and blood. They were understood to be vectors of disease as far back as the 1800s.

Dogs are very susceptible to tick bites and tick-borne diseases. These diseases can be transmitted to humans through bite wounds on the skin and by contact with ticks on bedding, clothing, or in living areas of dogs that have been infected. Vaccines are not available for most of these tick-borne diseases, and they don’t keep the dog from bringing them.

Due to the fact that dogs that go through grassy areas and woods are at higher risk for bites, especially during the months from April through September, dogs that travel through such areas are more likely to be affected than those who protect themselves.

Tick bites on dogs are sometimes difficult to detect. Signs of tick-borne disease may not appear for 7-21 days or longer after a bite, so watch your dog closely for changes in behavior or appetite if you suspect that it has been bitten by a tick. Many tickborne diseases have similar signs and symptoms. If you develop these within a few weeks of getting a tick bite, see your healthcare provider:

If your dog should have any of the above mention symptoms then you should consider a veterinary.

The best way to prevent your dog from contracting the tick-borne illness is to avoid ticks in the first place. This means avoiding any grassy areas that may have a high population of this vector and keeping your dog away from shrubs where these vectors can reside, waiting for a host. Also, apply insect repellant to your dog before venturing out into these areas. The brands to be used must be designed to repel the vector.  Keep the grass in your yard mowed as short as possible, The quicker you remove it, the less likely your dog will contract a secondary illness related to tick bites, and regularly inspect your dogs. 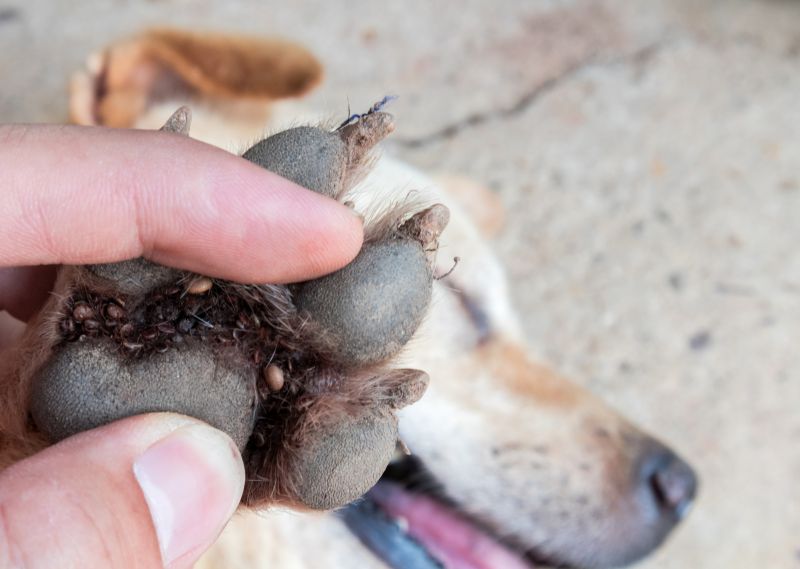 With the use of oral medication, there are medications that can kill both the vector and immature fleas. They will disrupt the life cycle of fleas and they are easy to give. If your dog has had a reaction to the previous medication, you won’t have to be concerned about small children or cats coming into contact with dogs immediately after the application of the new medication.

Dips are a concentrated chemical that needs to be diluted in water and applied to the animal’s fur with a sponge or poured over the back. This treatment should not be rinsed off after application. The chemicals used in dip can be very strong, before application read labels carefully. Do not use dips for animals under four months, nursing or pregnant pets.