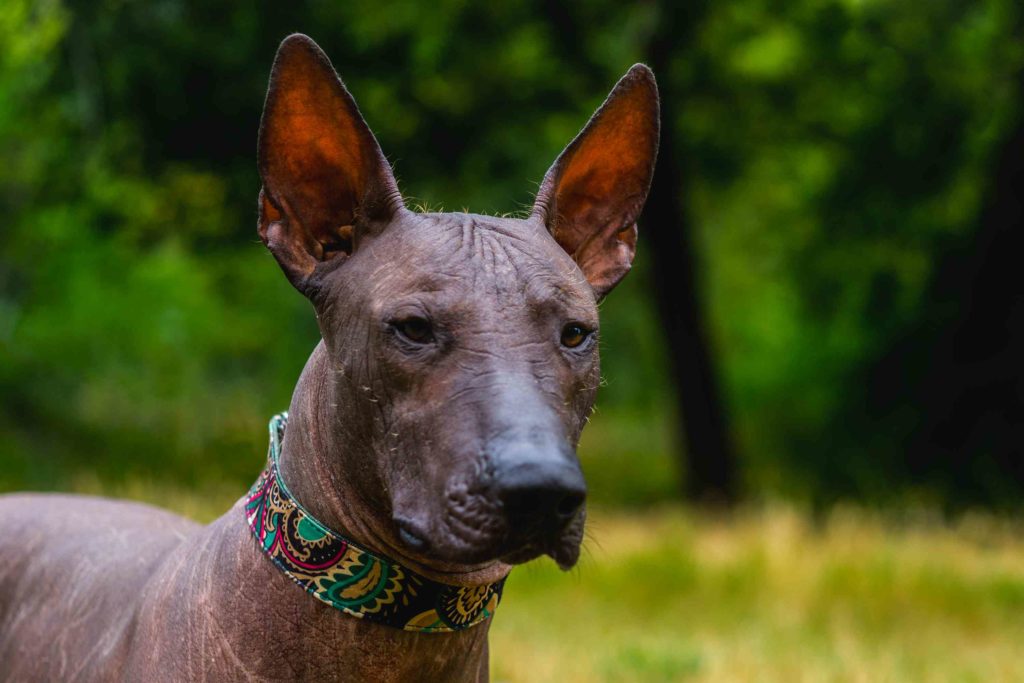 The Mexican Hairless Dog Breed is a hairless dog originally from Mexico. They were used to guard against spirits and intruders and also healed people. The first time these dogs were described by Christopher Columbus in his journal after he arrived in the Americas was in 1492. After the Spanish conquest, they almost went extinct but survived mostly in remote areas.

A dog (Clay statues of dogs ) of similar appearance to the modern-day Xoloitzcuintli was found in the tombs of the Mayans, Colima, and Aztecs (3,000 years ago). The dog was believed to guide souls through the underworld. According to Aztec mythology, Xolotl created it from the bone of life.

Mexican Hairless numbers remained low Meanwhile, in 1953, several British and Mexican dog authorities searched remote Mexico for Xoloitzcuintli realizing the breed’s tenuous existence, and returned with ten Xoloitzcuintli. In 1956. In 1956, the breed was named the official dog of Mexico. From there, this breed started to become more well-known.

In 2007, the Xoloitzcuintli was recognized by the American Kennel Club. Xoloitzcuintli are found in three sizes: standard, miniature, and toy. They share the same hairless gene as Chinese Cresteds; however, they may descend from ancient Asian hairless dogs.

The Xoloitzcuintli has a moderate appearance. They are 3-5 pounds, with males being larger than females, and they are slightly longer than tall, with lean bodies. All three sizes have good reach and drive when walking. Their coat is short and flat.

The Xoloitzcuintli is also called the Mexican hairless dog. The hairless variety has no coat or almost no coat, often with short, coarse hair on the top of their head, their feet, and the last third of their tail. Their skin is tough and protective. Hairless dogs feel warmer to the touch than coated ones, but they have the same body temperature. 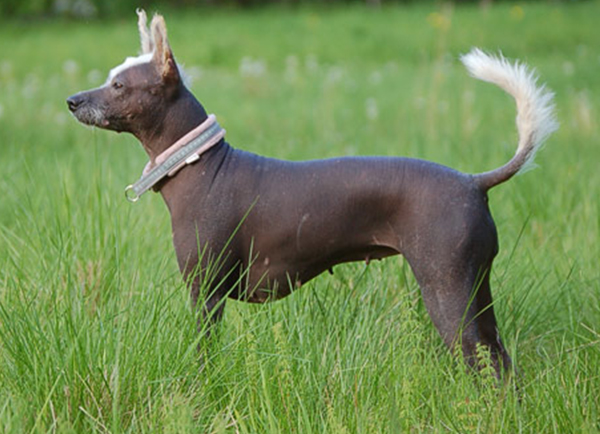 The Mexican hairless dog, also known as the Xoloitzcuintli or Xolo for short, is a breed that lacks full-body fur and teeth. It has a tuft of coarse hair on its head and toes. The skin of this breed is soft and smooth to the touch, and it has gray fur with black or dark bronze spots.

The Mexican hairless dog is a breed of hairless dog. It has a compact head with alert, upright ears. Its snout is longer than its skull. The chest of the Mexican hairless is deep and muscular, and it lifts its stomach off of the ground while walking or running. Its back is straight and ends in a rounded rump. The tail of Mexican hairless is long and thin. The larger type can weigh up to about 30 or 35 pounds, while the smaller, miniature type weighs under 12 pounds.

The Xoloitzcuintle dog is extremely intelligent, sensitive, high-energy, and inquisitive. These qualities were not modified through selective breeding, which means that adult Xolos are usually calm and friendly. This breed has a sturdy physical nature and vigorous health overall. 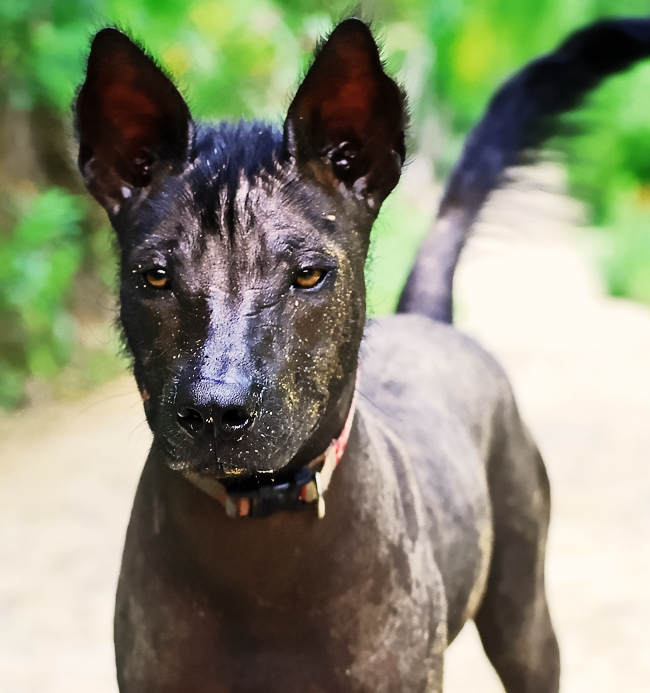 The Xoloitzcuintli is a small dog breed that is known for being an excellent family companion. They have a calm temperament and are great with children. They typically get along well with other animals in the home, including other dogs. The Xoloitzcuintli is very watchful of their surroundings and will alert their owners when they sense something unusual, such as people or other animals approaching.

The Mexican hairless dog can best be described as a companion. This breed is not suited to living outdoors in cold climates, so if you live in this type of climate, he should be an indoor dog. The Mexican hairless does well with moderate exercise requirements; romping around the house and short walks should be enough. He will need about an hour a day. In the sun, sunscreen should be applied to protect his skin. 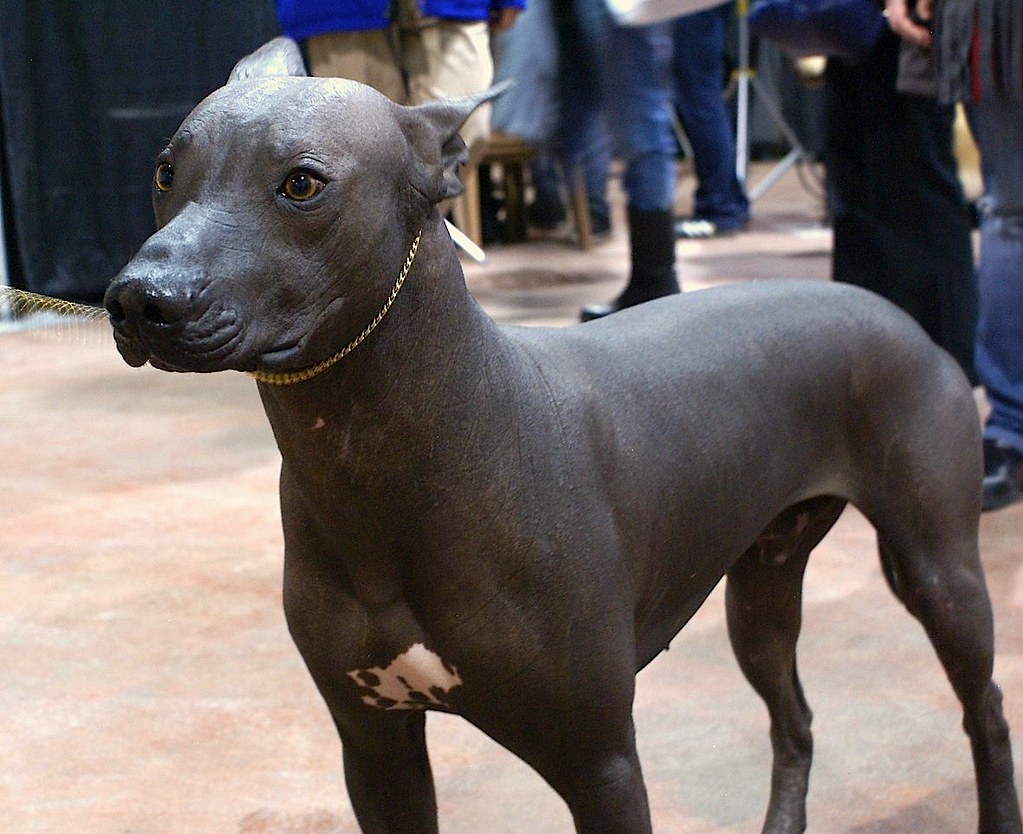 The Xoloitzcuintli is a very healthy dog breed. Unlike other breeds, it does not have many structural or health problems but later in life at an adult stage problems may arise. This dog can live an average of  13 to 18 years, which is one of the longest lifespans for dogs.