The Japanese Bobtail is a domestic cat breed with a distinctive bobtail that resembles a rabbit’s tail more than that of other cats. Although the cultivar is native to Japan, it is now found all over the world. For millennia, the breed has been known in Japan, and it commonly appears in folklore and art. Short-tailed cats in Japan are thought to have arrived from Asia at least 1,000 years ago, according to one idea.

In 1602, the Japanese government commanded that all cats be released free in order to combat rats that were destroying the country’s silkworm population and accompanying industries. Buying and selling cats was banned at the time, thus bobtailed cats were forced to live on farms and on the streets. 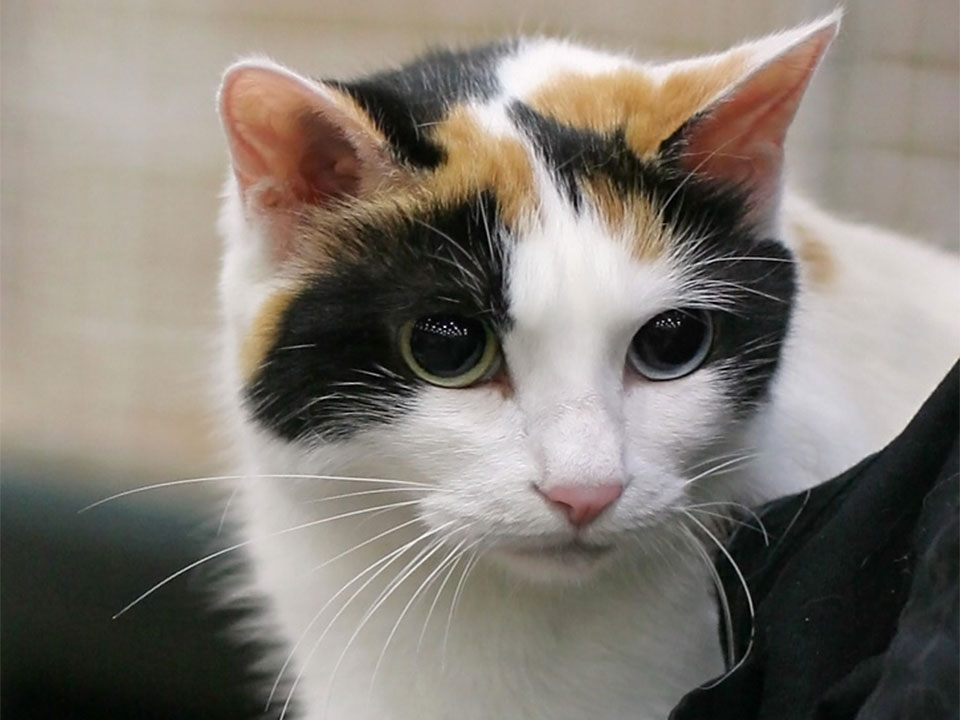 Elizabeth Freret is the first person known to have brought the Japanese Bobtail from Japan to the Western Hemisphere in 1968. In 1976, the Cat Fanciers’ Association approved the short-haired Japanese Bobtail for Championship status. In 1993, the long hair variation received recognition. Despite the fact that there are a handful of Japanese Bobtail breeders in 2013, the breed remains rare.

The majority of Japanese Bobtail breeders are headquartered in North America, with a few in Europe and at least one in Japan. Maneki Neko, which translates to beckoning cat, is a Japanese statue of a cat with its paw in the air. It is an artist’s rendition of the bobtail. Many Japanese shops have these statues because they are supposed to attract nice people.

The Japanese bobtail body is medium in size, with a long, slim, and graceful torso that is not tubular and has well-developed muscular strength without being coarse. The head is long and elegantly carved, forming nearly an equilateral triangle. In proportion to the length of the body, the neck should be neither too long nor too short. The ears are large, upright, set wide apart yet at a straight angle to the head, and alert-looking. The muzzle is fairly large and spherical, with no sharp or pointed edges. 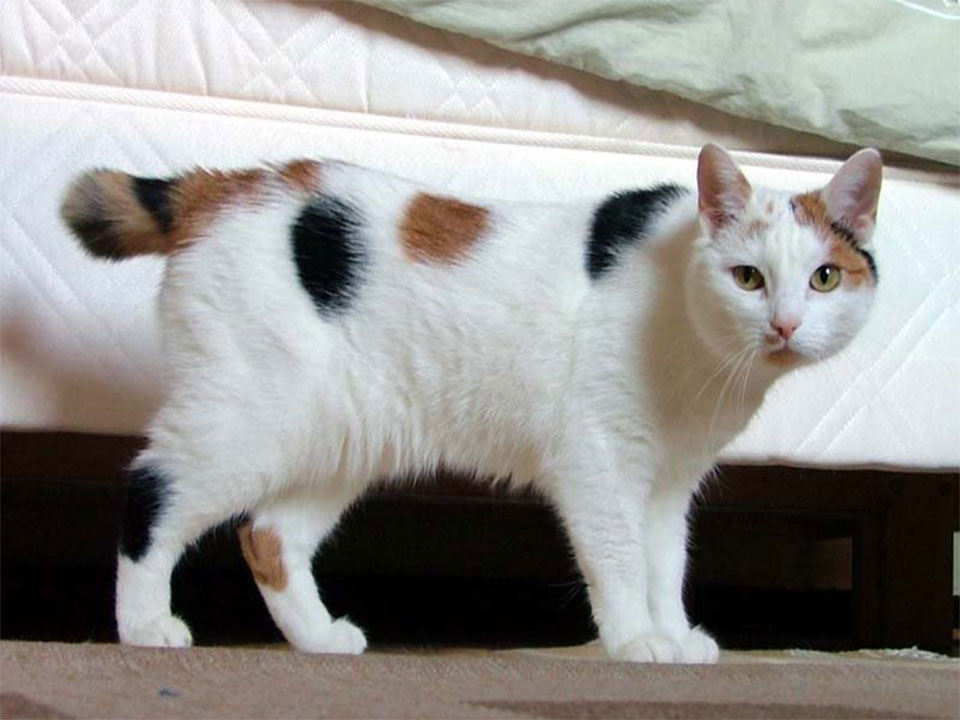 The eyes are large and oval in shape, rather than round. They should not protrude past the cheekbones or the brow. Legs are proportionate to the torso, long, slim, and tall, but neither tiny nor frail. The forelegs are substantially shorter than the hind legs. The shape of the Paws is oval. Five toes in front, four behind. Not only is each cat’s tail unique to the breed, but also to the individual cat.

The tail must be plainly visible, consisting of one or more curving articulations, and be of a size and shape that blends in with the rest of the cat’s appearance. Shorthair coats are smooth and silky and come in a medium length. The here can also be long, with a medium-long to long length and a delicate, silky texture that gradually lengthens toward the rump. There is no one hue or pattern that is favoured over another. Any hue may predominate in the dominant colored bi-colors and tri-colors (Ml-KE), with preference given to bold, dramatic marks and starkly contrasting colors.

They are exceptionally alert, attentive felines who take in a lot of information. They are a breed that is known for being extremely “talkative,” and they frequently connect with people through verbal communication. Their quiet vocals can cover virtually the entire range of tones, giving rise to the popular misconception that they can sing. The breed’s members are active, clever cats with a strong human-oriented disposition. They are easier to train to perform tricks than most breeds, and they are more likely to enjoy learning human-mediated activities. 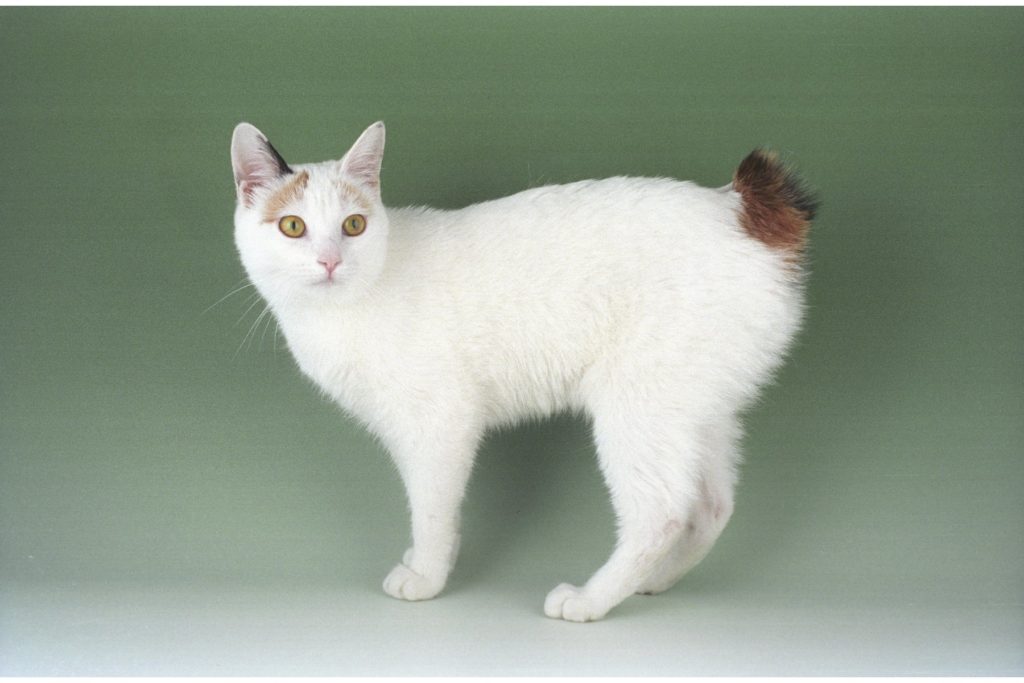 This breed is ideal for a family. They make good pets for children because of their friendly nature, and they communicate with people by making mild chirpy noises. This breed is drawn to water, is intelligent, and is recognized for its lively nature. It is always full of energy and mischief. Bobtails are a devoted breed that makes excellent friends. They adore climbing. Because of its short fur, this breed sheds minimally to moderately. It has an easy-to-care-for coat.

Bobtails are a healthy breed of cats. The recessive gene linked to shortened tails isn’t linked to any spinal or bone defects, although it can make people obese. This breed has an average lifespan of 12–15 years.